The scene at 01:28:44 in which Marty McFly turns to camera and says 'Planes will fall from the sky, the Korean tyrant shall reign supreme and Madonna shalt release a new album' proved to be startlingly accurate.

Much like the holo-cinema predicted, Jaws 19 is indeed due to be released in 2015, providing you're one of those people who doesn't care about those so-called "facts" you hear so much about these days. 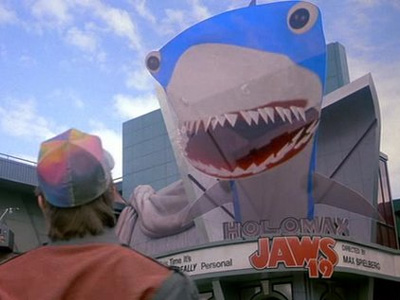 Although modern CGI could never hope to reach this unrealistic standard.

Hoverboards are now available in shops unless you're too poor and can't afford one, in which case I feel sorry for you man, check out my sweet new hoverboard! (*sprays sand in face of reader with expensive hoverboard*)

As you can tell from his purple silk dressing gown with golden trim, Biff Tannen appears to be a Ukip supporter, accurately predicting the rise of Britain's cuntiest political party. 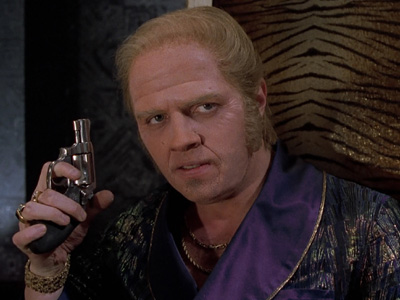 
Robert Zemeckis was correct in assuming that the year 2015 would follow 2014 in the calendar, which no one could have possibly known for certain back when the movie was made in 1989.

When Doc Brown exclaims "Great Scott!" that could feasibly be construed as him referring to Scotland voting 'No' in the Independence Referendum, although that's clutching at straws and the vote was held in September 2014 but really man, I've got ten things to file here and it's getting late so cut me some slack, Jesus.

In one of the movie's future timelines, George McFly dies after contracting the Ebola virus [citation needed].

More:  Back To The Future 2  Back To The Future  Michael J Fox  Christopher Lloyd
Follow us on Twitter @The_Shiznit for more fun features, film reviews and occasional commentary on what the best type of crisps are.
We are using Patreon to cover our hosting fees. So please consider chucking a few digital pennies our way by clicking on this link. Thanks!