Our semi-regular feature in which we subject ourselves to movies so evil, they make Genghis Khan look like Jeremy Kyle. In this instalment we erect an out-of-this world big top for Killer Klowns From Outer Space.


When deciding upon a title for your latest cinematic masterpiece it makes sense to hint at something identifiable - a location or a situation that evokes memories, or a concept to get the brain ticking over - whilst still holding back enough info to instill a sense of mystery. In other words, a reason to go watch it. In 1988 The Chiodo Brothers said 'balls to this' and created a movie that can be explained in its entirety using five words, yet is so bizarre it requires viewing to understand just...what the hell?

In the finest B-Movie tradition, Killer Klowns From Outer Space exists simply to satisfy a primitive urge we all possess: to see extras meet their demise in gruesome ways that make you go "ooof". In an inspired twist the cullings on offer are entirely - you've guessed it - clown themed! So anyone with a fear of popcorn, balloon animals, or any other circus paraphernalia should probably give KKFOS a wide berth, unless they want to drop to the floor in a quivering heap whenever an ice cream truck drives by. 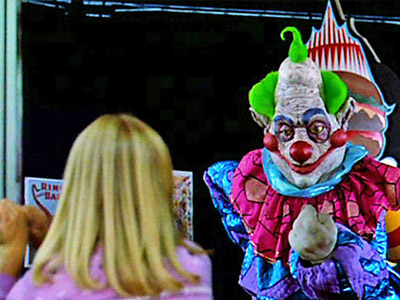 
What really makes KKFOS stand out from the million other clown/horror/slasher flicks is the trust earned by the directors from very early on. The effort put into carving a convincing universe, where you really could believe alien invaders have landed outside a small American town, is quite staggering. Every idea is afforded a fine level of detail to add authenticity in just the right place: entering a big top reveals chambers humming with lights, controls, engines and a working spaceship, where bubblegum balls used to capture human prey fit neatly alongside candy floss cocoons... Honestly, it's consistently inventive.

Highbrow concepts such as melting a hapless security guard using custard pie projectiles are so low down the list of clown things we're exposed to, you really don't question a passing character scooping a mouthful - in fact you'd be disappointed if the opportunity was missed. No chance. So dedicated is the film to delivering all things clowny, by rights future generations will use it as a benchmark for their circus experiences. Anything less than a hollowed-out-human ventriloquist act is a failure. Did I mention the hollowed-out-human ventriloquist act?

The clowns themselves are genuinely disgusting. A mixture of bulging eyes, pin-sharp teeth and slobbering gums, it's hard not to be creeped out by the startlingly realistic prosthetics. If one of these passed by your window you'd probably turn insides-out with fright, and then it would chuckle before devouring your intestines. With a film of this nature the makeup effects can make or break the potential for scares, and as further proof of the attention to detail lavished on key ingredients, KKFOS nails a style allowing the clowns to go from funny to terrifying with a casual scowl. 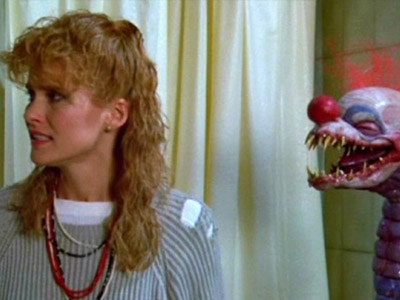 "Honey, why is Frankie Boyle in our bathroom?"


It's not all good news, however. Acting and dialogue from the human characters are predictably atrocious, and the wafer thin plot leaves a lot to be desired. But what does it matter? Inception it ain't. The real stars of the show are 7-foot tall and come wearing baggy trousers. And that's the real genius of the title. Whereas a B-Movie from the '50s would shoehorn science into a plot about gigantic ants, here we find any semblance of sense happily discarded because they come from fucking space. Whether you're going to a drive-in screening, or flicking channels at 2 in the morning, just one quick glimpse and you know how low to set the bar for IQ limbo.

The result of ambitious and demented minds, Killer Klowns From Outer Space takes the idea of murderous, rampaging aliens and runs with it until it's just a tiny little mental dot on the horizon. In a nutshell, it's everything you're horrified it could be, and then some. Driven by a childish impulse to entertain, the talented Chiodos have accidentally created something of a gem that falls more on the side of brilliant than terrible. Don't get me wrong, it's still rubbish - just an evolved form of trash with the capacity to know what it is - but it's all the more enjoyable for it.


The Chiodo Brothers have gone on to forge a successful movie career, providing special effects for films such as Elf and Team America, as well as working on TV shows like The Simpsons. Ain't that nice. Join us next time when we'll be trying out another title to see how finely it balances the delicate line 'twix Terrible and Brilliant.

More:  Terribrill  Killer Klowns From Outer Space
Follow us on Twitter @The_Shiznit for more fun features, film reviews and occasional commentary on what the best type of crisps are.
We are using Patreon to cover our hosting fees. So please consider chucking a few digital pennies our way by clicking on this link. Thanks!