The 10 dumbest things about Green Lantern

If you thought my review was harsh, then a) you're wrong, and b) here's even more reasons why I was right. Now let's take these pants off and make some complaints!


Believe it or not, I really wanted to like Green Lantern – I like Ryan Reynolds, I like Martin Campbell, I like superheroes and I also like overblown, effects-heavy tosh. But somehow, Green Lantern is less than the sum of its parts. It's almost impossible to enjoy, due to the faux-seriousness every character adopts when dealing with scenes and events that are clearly highly ridiculous to anyone watching. Stuff like this...
Who is that masked man?

It's unbelievable to me that even in 2011, after approximately 394 superhero movies, that audiences are still expected to buy the whole 'extremely obvious secret identity' thing, aka Superman syndrome. Green Lantern's suit is generated by his magic power ring (no laughing at the back) and his face is masked with a green eye-piece "when your identity is required to be protected".

Except, it really isn't. You think the intergalactic space police could do a better job of shielding their identities than an eye-mask that looks like something you'd get in a Boots 3-for-2 multi-pack at Christmas. Blake Lively's character does comment on the fact that Ryan Reynolds is easily recognisable even in full Lantern garb, but why no one else realises it's him is a mystery. We'd know those abs from a mile away. 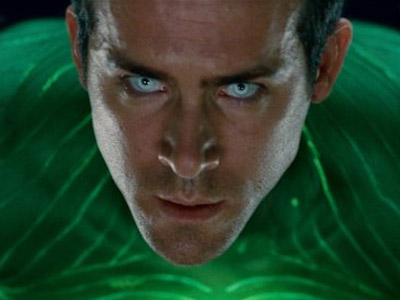 Mmmm... still nothing. Can you give us a clue?
The power battery

There's a scene in Green Lantern which you've probably already seen in the trailers – you know, the obnoxious bit where Hal magics his costume on in front of his mate and yells, "I KNOW, right?" I LOLed. The first time.

The full-length scene in the movie, however, shows Hal attempting to suit up to no avail. He then realises he has to fist-bump the magic lantern he was given by Abin-Sur (Vimto man) to recharge the ring's power before it'll work. Aha, you think: that's a piece of expository plot information that'll come in handy in a short while. A long while later, you realise that, actually, no it won't – it's an entirely pointless scene that accomplishes nothing. The ring just needs to be charged like a mobile. Presumably if the ring runs out of juice while fighting space ghosts in the Andromeda galaxy, Hal's head will explode because of a lack of signal. I'd LOL at that.

Who uses a lantern anyway? When was this written, 1812? In any case, the makers of Green Lantern missed out on some A1 product placement. 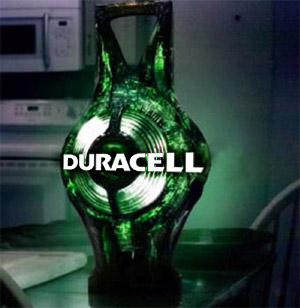 Officially the least glamorous name for a superhero love interest ever. Pepper Potts just got bumped up a notch.
SCIENCE BUILDING

When the remains of dying alien Abin-Sur are found by the government, they're rushed to a top-secret facility when top science boffins can fiddle with his bits. Where is this high security complex? Area 51, perhaps? The Hush-Hush Institute For Extra-Terrestrial Investigation, deep underground in a bunker in Washington? No, it's in a building marked 'SCIENCE BUILDING' in gigantic letters.

Seriously. SCIENCE BUILDING. Green Lantern's budget was rumour to be over $150 million dollars. It had four writers. At no point throughout the entire film's production did anyone think of anything better to call the US government's top location for investigating the remains of a dead alien than 'SCIENCE BUILDING'. Unbelievable. 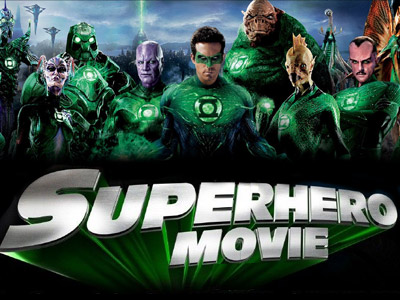 Also, the original planned title for the movie had already been taken.
Uh oh, another highly inopportune flashback!

The moments in which Hal Jordan plays up his Daddy issues are the moments Green Lantern comes closest to self-parody – every flashback Hal suffers feels like something out of Hot Shots or something. That's how lazy some of the scripting feels.

Let's see if we can't help push Hal through the anxiety he feels around his dead father. And yes, we have been watching a lot of Frasier lately.

Example #1: After outsmarting two AI planes using sheer charisma and loose-cannon-ness (actual line: "You're a liability, Jordan!"), Hal Jordan suffers a flashback about his father's fiery aerial death while plummeting to Earth in his extremely expensive jet fighter. Pull up, Topper! Pull up!

Solution: Don't pin up a photo of your dead dad in your cockpit.

Example #2: Hal and Carol are making nice in a bar and getting to know each other better, when Hal sees a photo of his aerial ace father pinned up behind the bar. Troubled, Hal storms out in a confused, emotional mess.

Solution: Don't go to bars that have pictures of your dead dad on the wall.

Example #3: Hal has a moment of clarity when he reaches for his jacket in his wardrobe, only to see one of his dad's leather jackets hanging up.

There – we just saved you a five-figure therapy bill, Hal. You're welcome.

More:  Dumbest  Green Lantern  Ryan Reynolds  Blake Lively  Mark Strong  Martin Campbell  Peter Sarsgaard
Follow us on Twitter @The_Shiznit for more fun features, film reviews and occasional commentary on what the best type of crisps are.
We are using Patreon to cover our hosting fees. So please consider chucking a few digital pennies our way by clicking on this link. Thanks!
Next Page »