Like you, and five million others, I enjoyed the new Iron Man 3 UK trailer earlier this week. Unlike you, I ventured deep into the subterranean nightmare that is the YouTube comments section to try and gauge the real public reaction. Spoiler alert: everyone is idiots.

marveltoontown 17 hours ago
Good god, the more I hear about marvel's plans and success compared to DC I think about scientists creating new life. while on the other side i see cavemen scratching their backs clueless on what﻿ to do.

mswindell10 1 day ago
Almost﻿ as good as Argo
Anger

Keith Hoilett 2 hours ago
Dammit Marvel why would you do this??? Couldn't leave at least one cool surprise for the﻿ actual viewing? Literally, Hey Gais U like S00tz, we got S00tz fer U. Love u long time!!

UserNotFound1001 1 hour ago
The Gay Jews run Hollywood that's why we keep seeing all the﻿ same repetitive nonsense.

critical488 1 hour ago
you people are too easily impressed, have you noticed all trailers are the same, and﻿ movies are more and more generic :D ? Can your mind even understand this :) Download a few trailers for action movies and watch them side by side

Manusia Games 5 hours ago
ironman fucking lose! Fuck that shit. But Superman is the fucking best. Don't fuck reply to﻿ me.

Vigilante1O9 10 hours ago
"Why can't I sleep?" may be the dumbest question they could've put in the trailer. Makes the movie seem like he's just battling insomnia the entire time. ﻿

HiyoAnime 1 day ago
:I after watching this trailer... I'm not convinced that it's gonna be good... at all.
First up: didn't his ironman heart turn into a triangle? that's not exactly something easy to screw up. it was practically the main focus﻿ of the entirety of the last movie..
General Observations

moondanceff 9 hours ago
I get tired of movies much slower than everyone else does, so if everyone could just go see this, maybe we could have another couple iron man movies :D... It really sucks, because people don't see the movie I really want a sequel to and then there's no sequel, and I'm just like FU﻿ WORLD.

Psmann13 12 hours ago
thats gay multiple iron men fuuck its gonna be weird but w.e we'll﻿ see how it plays out when it comes to theatre's.

joet797 12 hours ago
always a guy protecting﻿ a female but when u ask her to make you a sandwich...that's too har for her to do..pfft...

John Anderson 13 hours ago
Man Iron Man the Shit even though he's not real i still look up to him. ﻿ NASA need to something like that

BlocksandCraft 21 hours ago
Another﻿ trailer!

Brandon33akahk 2 hours ago
I bet Chris Martin feel like﻿ Iron Man, every time he lies next to Gwyneth Paltrow.

JasonMCLOVINBourne 15 hours ago
kristen stewart should be a﻿ bond girl

AirAddiction603 21 hours ago
If﻿ you want to be entertained then watch the ping pong trick shots on my channel. They are pretty crazy

ForeverFlame88 19 hours ago
This trailer proves the Bible is right when it says what we see is temporary...﻿

Kevin Tarvin 1 day ago
Paltrow has got to know that after Her autopsy in Contagion she can never be considered attractive. There is a lasting impact when you﻿ see the inside of someone's face.
Confrontation

craigandjolene 7 hours ago
Why don't people just shut the fuck up and enjoy it? If any of you think YOU can make a better movie, this or Avengers or Batman or Spiderman or even the new Star Wars movies coming out or any of﻿ them, put up your own money and do it, then. Otherwise, save your money, don't see the movies that are actually made, and stay home and live in your own little fantasy world where nobody can please or entertain you but yourself, you're so fucking perfect....fuck!
This looks awesome, BTW...

mark3l0ff 11 hours ago
Well then, I dare you create a real life Iron Man suit then﻿ we'll have the live action you want and I'm gonna wear the suit myself and I'll start the live action against you.

refluX1kreborn 14 hours ago
wow anybody who thinks this will be good or entertaining is fucking retarded. go ahead and flame me, i won't respond to nor read your replies because you're a faggot.﻿ for fucks sakes go back and watch movies like the original evil dead series... THAT'S entertainment, not this horrendous horseshit.

canvascientist 17 hours ago
Did you just﻿ called Ben Kingsley a bad actor?, you just won the most retarded troll comment ive ever heard in the history of bad trolling.

Dylan Notah 17 hours ago
4 anyone who's talkin bullcrap bout this movie, fuk all y'all, Iron man iz﻿ a freekin badass, unless y'all r a bunch of fags who enjoy movies like the twilight movies, fuk y'all haters of this movie, y'all can go suk on a dik

Mart3nN 1 day ago
your an﻿ idiot
Confusion

levipitney 13 hours ago
Is this only coming out in﻿ the U.K. and Ireland? What about the U.S.?

Ric Dave 16 hours ago
Cool now we'll get to see Iron Man bet up Weyland from Aliens﻿ and Gandulf from the freaking LOTR hippee!

ghostavenger1988 16 hours ago
they changed﻿ the black guy

lafincow12 18 hours ago
Is it﻿ me or does one of his costumes look like an Audi R8 ?

tubakorgphone 20 hours ago
WAS THAT THE JUGGERNUAT AT THE END﻿ OF THE VID?!?!?!

sherwinator34 21 hours ago
Michael bay is﻿ a fucking genius

13nalorie 22 hours ago
reminds me Shakespeares Hamlet. am i the only one?﻿

cug1dh 3 hours ago
Captain America had sex﻿ with Iron Man

Jared Streams 8 hours ago
Remember: This movie is based on the comics, not real life. Also,﻿ why does it even matter?

Xander Jordan 10 hours ago
They should make a second captain America, where they introduce him to the 21st century and shit lol that would be great﻿

psyycheddellicc 1 day ago
in terms of "epicness", they won't be competing in ticket﻿ sales necessarily.
And one that actually made me laugh... 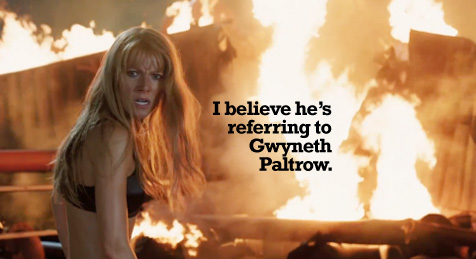 More:  Iron Man 3  Robert Downey Jr  Shane Black  YouTube
Follow us on Twitter @The_Shiznit for more fun features, film reviews and occasional commentary on what the best type of crisps are.
We are using Patreon to cover our hosting fees. So please consider chucking a few digital pennies our way by clicking on this link. Thanks!