So black-belt Chiles has been given the chop from The Apprentice, but there are still 576 hopefuls left. Due to BBC scheduling, even though we're only on the second episode I can't remember what my life was like before this year's series started: when Lord Sugar announced that he is "the judge, jury and executioner" I hoped he would grant me the sweet release of death.

The call to assemble comes through at 5.20am; at this point I would rule myself out of the running straight away: you can stuff your job, Sugar. For this task, the candidates must create "wearable" technology so it's design week! Will anything top previous Apprentice efforts including "The Pooch Pouch", "The Tidey Sidey", or the child's toy that plugged directly into the mains?

Lord Sugar calls out Sockless Wanker Rob to be Project Manger, given his fondness for natty suits from Top Man. Adjusting his cravat, Rob respectfully declines and Nick almost has a seizure scribbling this news into his notebook of secrets. Scottish Scott steps up, because he's just been to a conference on wearable technology, blissfully unaware he's just signed his own death warrant.

Before the girls can get down to business, they must come up with a new team name. They settle on "Tenacity", so they've gone from sounding like a gentlemen-only establishment to a range of incontinence pads.

The boys "invent" a jumper that has a secret camera, and it's like we've learnt nothing from the Dapper Laughs debacle. Not realising that their product will probably appeal only to playground lurkers who want to swap their plastic macs for something a bit more 2014, they rush off to stock up on UniQlo jumpers and Christmas lights. 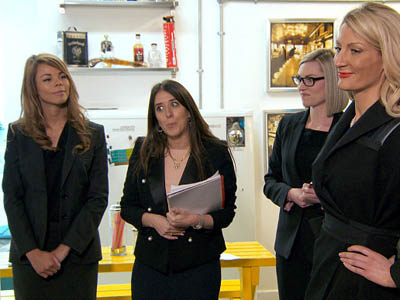 Any of these women would eat each other's young just to get a foot closer to the watercooler.


Shouting down Sarah's idea for a miniskirt that automatically raises its hem when it detects testosterone in the vicinity, the girls decide on a jacket that can adjust its temperature. I don't know about you, but I just take mine off when I'm hot. It also features a collar that changes colour (because ... technology?) a solar-powered phone charger, a digital catheter, radon/lie detector sphygmomanometer, and a rat snare. The end result is an M&S women's jacket with gaffer tape stuck on the lapels.

Summit's pitches do not go well: Daniel (or Danyewl as Lord Sugar calls him) asserts his alpha maleness by pissing all over the presentation to a buyer, declaring he wouldn't wear the creeper-jumper out in public. Of course he wouldn't; Danyewl would wear it at home alone, filming himself crying "Why did she leave me?" on a loop before uploading it to Facebook at four in the morning.

Under pressure to explain why The Best Jacket Ever looks so crap, Project Manger Nurun comes up with a better idea for a colour-changing burkha that pisses off Daily Mail readers. That, and one sympathy order from an online retailer, gives the girls the advantage and their treat is to be boarded onto a rocket and shot into the heart of the sun.
Who got fired?

In a shock twist, Lord Sugar fires Rob for not listening to his heavy-handed hints at the start of the task, and not because he's sick of seeing his naked ankles.

Ultimately, it's Scottish Scott who is sent packing, barely able to hide his anger underneath his bobbly scarf, looking for a bus stop he can punch. Danyewl the Pub Quiz Director lives to ruin another pitch, Karren goes onto pills for her high blood pressure, and Nick gleefully crosses off two more names in his book.