Apologies for the spoilerish title, but holy fuck, what just happened? I actually think I'm about to have an aneurysm. This is peak Apprentice, people; we're through the looking glass.


As per usual, Lord Sugar flouts Amstrad's off-site meeting room budget and summons the candidates to an impressive venue that has a tenuous link to the task ahead, before disappearing in a puff of smoke like some kind of boring, business genie.

Sometimes I worry that The Apprentice producers deliberately design tasks for the candidates to fail miserably: this week they're doing a viral. For the older and less informed viewers, voiceover man kindly informs us this doesn't have anything to do with Ebola and that it means something to do with computers and "online video sharing".

There's a certain creative element to this task which obviously means both teams immediately default to try and do something funny – guys, it's not easy trying to mine this kind of comedy gold week in, week out you know. This shit is hard.

A fact evidenced in the brainstorm session of this episode. It becomes painfully obvious that a writers' room filled with elderly Spanish widows, the Amish and Terry Lubbock would come up with funnier ideas; not one person mentions cats, or pugs, or even bacon. There's less humour here than a Michael McIntyre marathon on Dave.

Despite this, everyone gets pumped up about their ideas, which is odd because neither team actually has a solid concept to run with – the side effect of this is I can no longer feel my toes for they have curled so far back into my body with cringing embarrassment.

Ella Jade wants to make a documentary when she grows up, so she's been made PM of Tenacity (a word which makes me more uncomfortable every time I say it). The on-screen graphic informs us she is a "Marketing Graduate", which isn't a job really, is it? It's more of a statement. A bit like when you watch Jeremy Kyle and there's a graphic on a hapless punter saying "Wanks off geriatrics for pennies".

Anyway, her great wealth of experience in graduating leads her to confidently inform her team she's after "entertainment ... funny, do you know what I mean?" This inspires Felipe to come up with the "Fat Daddy" fitness video and pitch himself as the star. I shift uncomfortably in my seat. 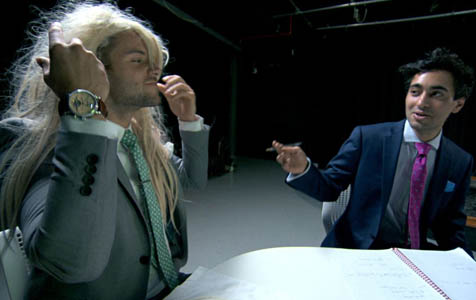 Just close your eyes, sit quietly and wait for it all to stop.


Solomon, who we are told does something with the internet, decides Team Summit will forge ahead with something called "Dare To Dine" and of course Dapper Laughs dives in, cos he's like "the funny figure". No one is moist.

What follows is pure, unmitigated horror. I've seen The Killing Fields, I've endured Salo: 150 Days of Sodom, I've been in an O'Neill's at kicking-out time, but nothing has ever compared to this.

Various fitness instructors ritualistically humiliate Felipe by pushing him to the edge of humanity (his and ours) through exhausting exercise, repeatedly calling him a fat fucker to his face in the process. For reasons known only to him, James decides to do his skits topless and as unfunny as is humanly possible, whilst Sanjay (I had to look him up) giggles like Jabba's little mate in the background, clutching a rubber chicken. We get the TV we deserve, don't we? Sigh.

Tenacity's pitch to Buzzfeed goes disastrously. Steven's sassiness fails to woo the editor's affections for Fat Daddy, with them thinking it's a bit mean, prompting Sarah to poke Felipe in the belly, saying "Look, he loves it! He loves it THE MASSIVE FAT BASTARD!" Danyewl glumly sums up afterwards: "Our only problem is the offensiveness." You and me both, mate.

The teams look to Nick and Karen to find out if they are hot. They are not. The pitches to Buzzfeed were so dire they instead decided to run an abortion story in the fail feed.

Lord Sugar, who I'm not sure really knows what the internet is, asking why the videos in his printout aren't working, broods throughout.

Unbelievably Dapper Laughs and co manage to pull it out of the bag and Team Summit are sent off to Iceland to enjoy a prawn ring.

In a move that sent shockwaves across Twitter (part of the internet, Lord Sugar), Ella Jade THE STUPID BITCH brings back Sarah and Steven into the boardroom, ie the best ones. What the actual fuck?
Who got fired?

He only went and bladdy fired all of them! Even Steven! I guess the world just wasn't ready for his fabulousness. Ella Jade and Sarah got sent packing too. Thou art a spiteful god, Lord Sugar.