Obviously I don't watch The Apprentice, because it is among the litany of modern cultural images intended to discourage individual thought, divert our notions of aspiration towards dreams of meaningless celebrity, and make us dumb, compliant and less likely to rise up and overthrow the shadowy conservative plutocracy that owns the media. But I've recapped last night's episode anyway for funzies.

The Apprentices, who now number eight, all live in a house together, and are surprised one morning by a knock at the door from Lord Sugar. More surprised than anyone should be when the house is already full of a camera crew, you could argue.

The Lord informs them that negotiation is a very important thing in business. "I'm not going to invest £250,000 in someone who doesn't have good negotiation skills," he says, in doing so stating up front the full amount of money he is prepared to invest, which is an awful negotiating tactic, a bit like driving your car into a garage and telling them you have £500 to spend before mentioning what's wrong with it.

They must all buy a series of items and get the best possible price for them. This will apparently last an hour.

On Team Tenacity, a man called Daniel says he wants to be the project manager because reasons and he does business good. He asks the others, an Australian man and a woman from Auf Wiedersehen Pet, whether they agree with this. She begins to put her case forward but he immediately screws up his face in disgust at the idea that she might be fit to do something so important (write a shopping list, essentially). When the Australian man opens his mouth, Daniel says: "Just back me. Just agree to me doing it", like Ben Kingsley in Sexy Beast. Sanjay wants to spearhead Summit so several seconds subsequently his status is secured.

"We're going to smash this one alive," says a man with hair. Shortly, Daniel's team is out buying the stuff, including diamonds, a Kosher chicken and, I don't know, a time machine, but Sanjay's mob decide to mooch around the house for a bit and catch the end of Homes Under the Hammer. By 11.30 they've made the decision that going out and buying things is probably the best course of action. 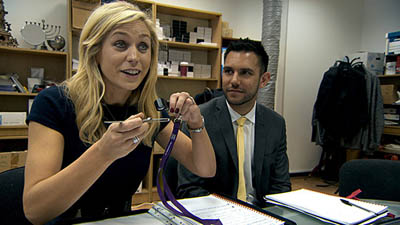 "Hi, I'm from the Apprentice production team. Re: this afternoon's shoot, we're just a bit worried your office isn't Jewish enough. Could you stick a menorah on a shelf or something?"


There's a lot of scurrying around in people-carriers reading documents (does none of them get carsick?) and old-school paper maps, despite no one under 50 ever using one in real life; talking on speaker with the phone held at a perfectly horizontal angle, like a sort of spirit level for lies; and wondering where to buy scallops.

On Tenacity, Felipe suggests that the instructions for the skeleton they have to buy don't specify that it must be constructed. He is a lawyer, so understands how to read words. Everyone congratulates him heartily on this, and they bog off to a shop where they sell flat-packed paper skeletons. "You've done well for me today, Felipe," says Daniel, as if giving placatory encouragement to his South American houseboy for a crumpet well-buttered.

Sanjay and Roisin get a good deal off a jeweller and Sanjay tells her it was like a heist movie. A heist movie in which two people give a shop money in exchange for goods. Summit arse around for a bit and fail to buy all the items, then turn up at the boardroom a bit late which is a problem because it's definitely a real meeting where it makes the slightest bit of difference what time anyone's there. Tenacity ace it, buy everything they need to and rock up with time to spare. It is in the bag. The bag of Sugar.

Everyone waits for Lord Sugar to arrive, as if this is actually his workplace and he is very busy working in another room and will then spare them ten minutes, rather than a TV studio in which he is sitting waiting for his cue while tweeting incoherently about Tottenham Hotspur. It's all relatively convivial: Lord Sugar says a thing about haggling with vending machines which gets a polite laugh. Sanjay repeats his heist movie joke, obviously pleased with it.

Being relatively unfamiliar with it, I am staggered at how bad Sugar is at TV. Everything he says is stilted and transparently pre-scripted. Not that I expected greatness; more that they've built ten seasons of this around him and I presumed it was because he was eccentric or spontaneous as well as the inventor of the Amstrad CPC 464.

It's all going great until the paper skeleton, at which Sugar asks: "What is this skeleton?" Felipe, immediately hung out to dry by the teammates who were congratulating him for his out-of-the-boxity hours earlier, tries to reason that the instructions didn't specify yada yada yada, but is slapped down like the Bogota berk he is, and you feel sorry for him, having seen his childish delight at having won approval before. Tenacity are fined and Summit, having been an absolute crock of shit, win and are off to Silverstone.
Who got fired?

Daniel doesn't choose the Australian, who goes back to the house, stopping off in Hammersmith high street to sell paintballing days to passers-by, and leaves Felipe and Jimmy Nail's daughter with Daniel to face the finger. Sugar conjures an astonishingly stale metaphor about his being the Supreme Court or something, and the other two pretend to have thought the paper skeleton was a shit idea all along and only went along with it because Felipe threatened them with mace.

It is rightly pointed out that they are both dicks, but Felipe is fingered off and leaves in a taxi. "At the end of the day I believe I am a winner," he informs us, despite some very recent evidence to the contrary. Next week: they're all making Angel Delight in a bid to win the job that is definitely a real thing, or if not just a career based on pretending to have controversial opinions in order to get on TV.