This week, the task is to run a kids' party planning agency, on a £2k budget. Lord Sugar should hire me, I've ruined plenty of my nieces' and nephew's parties and never asked for any money – I just can't stand someone else getting all the attention.

Selina is given the poisoned chalice of Project Manager of Team Connexus, as she runs an events company; apparently Brummie Gary does something similar, so he's PM of Versatile. The difference between them is that Selina is quite open with the fact that she hates children; I can feel myself warming to her after all this time.

As a kind of twist, the "kids" who are having parties that cost more than my annual holiday are actually teenagers, so there's plenty of room for disaster for the candidates attempting to get down with it. God, I hope one of the teens brings a switchblade to the party. Gary and his crew meet young Jamal, who seems a nice enough kid who likes outdoor stuff and chocolate cake, but his mum has a severe nut allergy – could we have the first client death on our hands? Let's wait and see... 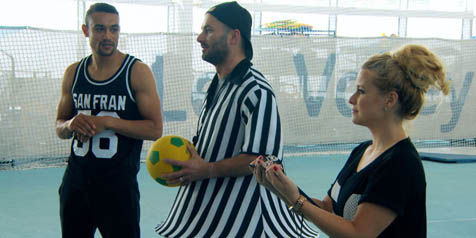 Exclusive images from inside England's unsuccessful pitch to host the 2022 World Cup.


Over at popular youth hangout the Charlotte Street Hotel, Selina is bombarding poor 13-year-old Nicole with ideas. "Do you like face painting? Do you like fairies? Do you have many friends? Do you think your friends really like you? Do you think you'll ever find love?" Despite her earnestness, Claude nearly blows a gasket when he points out that Selina has forgotten to get contact details from Nicole's mum in case she needs to up-sell to her later on; yet again heavy-handed producing means this is going to be something that comes into play later on.

At their meeting, Nicole told the team she was quite into sports, so naturally Selina opts for an afternoon tea, wanted by no kid ever. The team do find a place that "does sports" – a local leisure centre – and book it immediately.
Leafing through their event manual (so there actually appears to be very little party planning going on), Versatile go to an outdoor adventure centre. David volunteers to run the event, because he has experience of working at kids' camps. Oh David, it's going to be a long way down from here.

To make some extra money on top of their fee, Gary wants to dish out bags of tat as party bags; at my previously mentioned birthday party, everyone got to take home a bit of the "crocodile", so hopefully they'll choose items that top chunks of cucumber. Charlene and Joseph are in charge of the cake, and decide on risking using a jar of chocolate spread that "may" contain nuts, so it "may" kill Jamal's mum – it'll be like having a party in Westeros!

After an afternoon making macaroons, Vana and Richard discover that a high-end afternoon tea will be too expensive, so Richard forces Selina's hand to have a BBQ instead, which Selina insists must still be "high-end". Again, I can't help but hope that cucumber crocodile might make an appearance. It's at this point Selina realises she can't call Nicole's mum to asks if she wants party bags, and tries unsuccessfully to blame Richard. I can't believe Selina might actually leave this week; she's too good value.

It's the day of the birthday parties, and despite David's experience of working in children's camps, he insists on running the event like a corporate away day; any minute now he's going to be making a bunch of 13-year-olds do trust exercises and ask them what they really feel about Doreen in Accounts. Joseph insists Gary tell Jamal's mum about the potential death cake, but he can't give a clear answer. For the second time this series, Karren has to intervene to avoid a devastating tragedy that could cause Jamal to have a fear of men in suits for the rest of his life, and his parents insist on seeing the jar used to make the cake. For £2k, couldn't they have just bought a nut-free cake?

The sport event run by Connexus isn't going any better either, as none of Nicole's mates are particularly sporty and Brett's cracked a joke about being bald, making them all collectively cringe with embarrassment. It gets worse on the party bus to the second venue as Brett serenades the girls with some Britney Spears and is a few seconds away from doing a full Magic Mike on them. 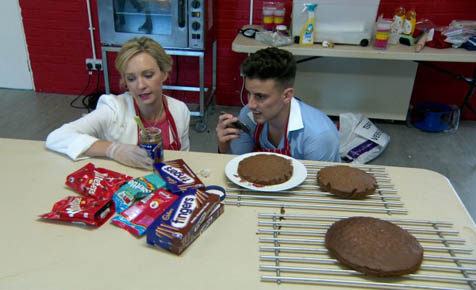 "Wait, this is Nutella. How many jars did you get?"
"Four hundred, be on the safe side."


Across town, Jamal's party bus is about as fun as syphilis. Gary and David have opted to keep it corporate by still wearing their suits and not playing any music since Gray's forgotten to provide any, so David starts to sing the "Hokey Cokey" to a load of kids born in 2002. I feel one step closer to death, as is Jamal's mum who has to sit forlornly 50 feet away from the death cake until Joseph can fish the jar of chocolate spread out of the bin. A nation holds its breath to see if this party is going to end with someone being carried out on a stretcher, but Jamal's parents decide it should be OK. Just how serious can this nut allergy be, in that case?

Richard's has not had much luck with Nicole's birthday cake either: he can't ice it as it's still too warm, and goes full-on Gordon Ramsay at Vana telling her to fuck off if she asks him where the cake is again. He's also refused to buy extra glitter for the goody bags, and you can tell Selina's almost pleased as it means she can drag him into the boardroom. However, Nicole's mum takes one look and politely declines paying for them, adding "I just wish you could have called me." I said this would come into play, didn't I?

Except it doesn't make any difference, as Connexus win with a profit of £614, perhaps in part due to Richard's stinginess. Their prize is a snowboarding lesson, wooooo.

At the Sad Café, Gary makes it clear David will be back in the boardroom with him, because he was General Fun-Killer and because he messed up the personalised T-shirts they were trying to add as an extra. Unless David's business plan is a T-shirt printing business, how can this have any bearing as to whether Lord Sugar should invest in his business idea or not? What has any of this got to do with business, for that matter?

Gary can't decide whether Charleine or Joseph should be held accountable for the chocolate cake disaster. They're arguing over chocolate spread to prove they're worthy of a quarter of a million pound investment: we're at peak Apprentice. Twenty minutes later, he reveals that Joseph should come back into the boardroom, and Charleine makes a pre-emptive break for freedom before being dismissed by Lord Sugar. YOU CAN NEVER LEAVE, CHARLEINE.
To punish her for her for her hubris, no one is allowed to go back to the house and all four must dance the dance of death.
Who got fired?

A very pink and wobbly David gets the finger, even though no one was in danger of dying at his hands.
Does he thank him?

Yes, but he blames his team for turning on him to save their own skin, as if this is the first time this has ever happened in the history of The Apprentice.
For next week's task, the candidates must seek to combine elements of algebraic geometry and abstract algebra to create objects that are beyond visualization and mathematical description, whilst simultaneously trying to run a pop-up asparagus restaurant.

More:  The Apprentice  Alan Sugar  The Apprentice Recaps  The Apprentice Season 11 Recaps  BBC
Follow us on Twitter @The_Shiznit for more fun features, film reviews and occasional commentary on what the best type of crisps are.
We are using Patreon to cover our hosting fees. So please consider chucking a few digital pennies our way by clicking on this link. Thanks!