Well, that was a big fuss over nothing. I give a vote of no confidence in delaying The Apprentice by ten minutes and totally messing up my dinner plans. I was hoping to see Theresa May saying "Thank you for the opportunity" before walking out of No.10 with her wheelie suitcase.

Before the interview process begins, there's an inexplicable intro of all the candidates in gym gear, doing tasks that are loosely related to their business plans. Camilla is in the kitchen preparing her product, which is made by carefully squeezing a muslin bag, or nut sack, until the softened almonds, or nut milk, oozes out. Sabrina loses a tennis match to a wall, whilst Khadija is giving the job of cleaning the loos. And only now do we discover that Daniel has invented a hangover cure GIVE HIM THE MONEY NOW.
Camilla - Busting a nut

Fashion and style entrepreneur Linda Plant is looking resplendent in red as she waits for her first interviewee to arrive, until Camilla turns up and it looks like she's a version of Camilla sent from the future. 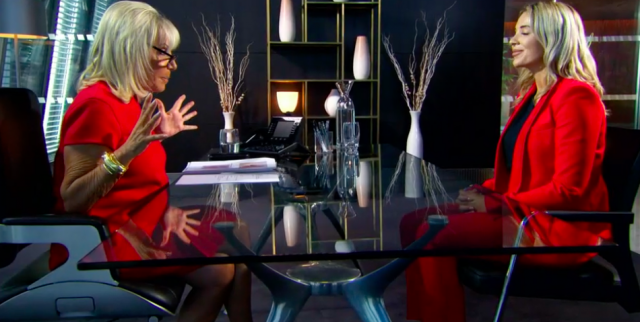 There's so much I want to warn you about, and alas, I cannot.


Linda informs Camilla her she's a far way off getting stocked in supermarkets, nearly ignoring that now she's been on The Apprentice at least a couple of million people already know about her product. Job done, surely?

After seemingly getting stuck into Sarah-Ann's stash of cider to give a boost of confidence before going in to Claude, Camilla gives it all the confidence of Theresa May striding to an ABBA soundtrack and gives him a breezy, "Yoo hoo!" for good measure. Claude does not approve. He's straight onto a case of 20 grand missing from her proposal, which she's sure is in there somewhere. Claude does not approve.


Khadija - Taken to the cleaners

If there's one thing Khadija likes, other than adding stuff to her list of things to complain about, it's shouting. So much so, she even has a go at Linda Plant, which is a bit like screaming into an oncoming hurricane. Khadija feels that a swanky London office would enable her to bag high-profile contracts cleaning skyscrapers, but an incredulous Linda warns here this is overly ambitious. "Why do you need a London office, you haven't even conquered Peterborough!" A smug Khadija stands her ground, declaring, "I'm on my way" with enough force to take the shellac off Linda's nails.

It's up to Claude to try and bring her down a notch or two, with some psychological warfare. He asks Khadija if others find her difficult to work with, to which she responds she's passionate, but the other candidates like her. Claude narrows his eyes before unleashing the beast, "No they don't Khadija, I asked them all and they said THEY ALL HATE YOU!" This does nothing to dent Khadija's assertiveness: she manages to stop herself from bellowing "I'm not argumentative, you slag" and reckons she could land a multi-million pound contract tomorrow. Has Claude lost his touch?

Not even Mike Soutar's trump card of pulling out her numerous logos can put her off, and only Claudine Collins manages to break her exterior by bringing Khadija's main motivation, her kids, into it, prompting Khadija to burst into tears. Probably angry tears, but tears nonetheless.
Sabrina - Can't make a racquet

Lovely, bouncy Sabrina, dressed all up like Annie Hall. She gets off pretty lightly with Linda, who gets a bit snooty about her lack of experience, which leads us to ponder why her application was taken on in the first place. Sabrina plans to use Lord Sugar's investment to buy out her competition, but uh-oh, she's forgotten to ask them if they want to be bought. I don't know much about business, but I'm not sure that's exactly how acquisitions work.

Mike gets stuck into what makes Sabrina's tennis tournaments different to everyone else's, and it's because of goody bags, which is usually enough for me. However, there's the tricky problem of the fact that half of the tournaments she ran were cancelled, so she's been lying about how successful the company has been. Will Sugar give her a vote of no confidence? 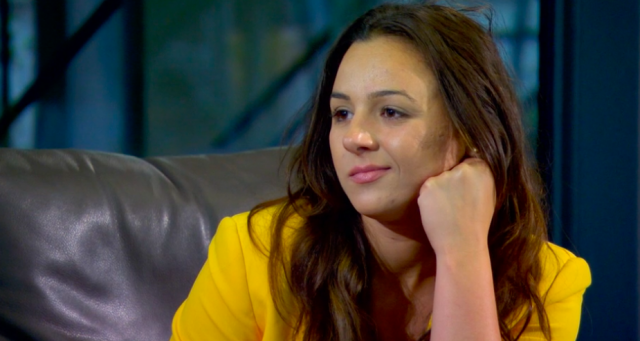 It doesn't get off to a promising start for the swimsuit designer: Linda pulls out a bikini from a supermarket virtually identical to one of Sian's, which pisses off Mike no end because he's usually the one who points out stuff like that. Sian is not moved, pointing out the many differences, like the colour is clearly different, but Plant's not having any of it. She roasts Sian's figures and her inexperience (again, why let them apply?) but then seems to soften at the end of the interview after finding they had some common ground in starting up business in Leeds. That is until Sian starts to tear up, forcing the shutters to come down and Linda to snap, "This is no place for crying." Shut up, it's because I've been chopping onions.

Rather than rooting out her lies, Mike gets to test Sian on her fashion knowledge, demanding to know what's going to be the next big thing in swimsuits. A hushed nation sits forward to learn more: big tassels and billowing sleeves, apparently. As I hurriedly scribble down "swimsuit with sleeves" on a notepad, Soutar points out that anyone wearing it would probably drown, causing Sian to fall silent. Come on Sian, you said you were the Beyonce of business! Would Beyonce go through all this hassle for a new job? No, Beyonce would just rock up at Amstrad and say: "I work here now."
Daniel - Master of none

Why are we only hearing now that Daniel has invented a cure for hangovers? Probably it's because of "draconian UK laws" in that he can't make such claims, as it's not been medically tested. And anyway, everyone knows the tried and tested cure for a hangover is a can of coke, a packet of salt and vinegar McCoys and then a long cry in the shower.

I suspect that Daniel had no idea he was going to last this long in the process, as the number one rule for getting to this stage is to not have any porky pies in your business proposal. Immediately, he's pulled up by a triumphant Mike over his claims of selling over a million units already. Flustered, Daniel says he would have to check who wrote that. Mike glares at him, as Daniel shifts from "It wasn't me," to "It might have been me", "Probably me" and then finally "It was me" with Mike not having to do anything more than intensify his glare.

Probably feeling a bit ruffled, Daniel attempts to turn the boat around and get a handshake out of Claude, but is denied. Oh Daniel, The Beast Master cannot touch warm human flesh because he's too tempted to swill the sweet life force pumping through your veins. At the very least Daniel tries to stake a claim as the one remaining candidates who wasn't left sobbing at the end of the process, until he gets in with Claudine "The Counsellor" Collins, who asks him about his dad and then it all comes out. Sometimes it's just good to get the boo-hoos out.
The boardroom

At the last chance saloon, the final five all lay into each other, making snidey personal comments in the hopes that Sugar will agree, but for three it's all for nowt.
Who gets fired first?

Sabrina is the first out of the door, for being too inexperienced.

Does she thank him?

It's a bit of a downcast "Thankyoufortheopportunity" from the tennis coach, as she realises she never really got the opportunity to shine in the process.
Who gets fired next?

Khadija, whose plans for a multi-million cleaning empire were nothing more than a pipe dream.

Does she thank him?

A quiet TYFTO, before screaming "YOU COWARD, I DON'T FUCKING SHOUT!" up at Sugar's window as she waits for her taxi.
Who gets fired next?

Daniel, who despite as it turns out being actually quite a nice guy who did a lot for charity, because Sugar felt he wasn't someone he could invest in. What about those of us who've spent 11 weeks on this, Alan?!

Does he thank him?

A curt TYFTO, with a conciliatory "Good job, well done" for the remaining two, Sian and Camilla.

Who will win, and does anybody care anymore?