This week, a tricky technical leaves one contestant in tears when our amateur bakers are asked to create 2000 show-stopping doughnuts, despite the fact that their backgrounds range from digital marketing to tree surgery and absolutely nothing to do with running a pop-up bakery. As the heat rises, who will be Star Baker, who will leave the tent, and who’s got a soggy bottom? It’s The Great British Bake O-h hang on.

It’s "Making Dough” week, and Sugar is mixing up the teams like the muffins in Paul Hollywood’s kitchen. He’s done with the boys/girls thing, and he wants them to make doughnuts because the BBC have still got tons of leftover flour from GBBO. And finally, we get some team names! Welcome, Team Typhoon and Team Collaborative, I look forward to pointing out just how inappropriate those names are.

This week’s ‘Person Who Has Just Materialised and is Now PM’ is Tom. You know, Tom. He has a beard? He “puts people where they want to go?" Wears a tie the same colour as his shirt? Tom! He’ll been poking the holes in the dough for Collaborative, whilst Camilla is PM of Team Typhoid. “I make nut milk” she says smugly, which I don’t think is anything to boast about.

Camilla knows about taste, on account of her nut milk (the more I say it, the worse it sounds), and pushes for Brexit Donuts with “British flavours” - so spam and tinned peaches, then. Tom (Tom, bloody Tom! The tree surgeon!) is slightly more democratic, which on The Apprentice means he’s indecisive and really gets Karren’s back up. Unable to make a definitive decision, he allows Jasmine to come up with a chocolate doughnut covered in sriracha hot sauce, which is should be classed as a crime against humanity. After nearly exploding after eating one, Frank suggests they call it “Fire in the hole,” Oi, I come up with the jokes, mate.

In this week’s moment which set Twitter alight, the world becomes outraged because both teams think doughnuts cost £5 each. Especially when the end result looks like an explosion in Camilla’s nut milk factory. 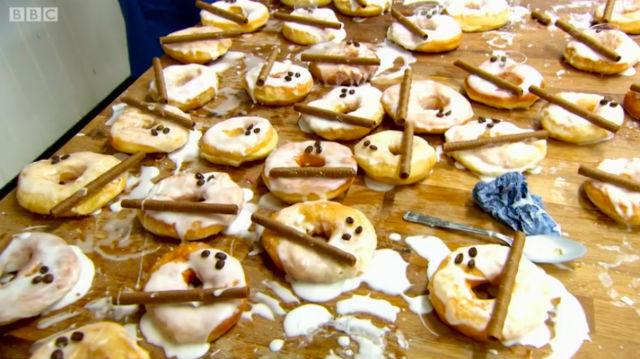 "This looks worse than a decorator's radio"


The baking goes just about as well as you can imagine. Surprisingly it's Kurran, who looks like the type of guy who fucks up all the mugs in the office kitchen with his protein powders, is the voice of reason after Jackie promises a corporate client bespoke doughnuts in a ‘B’ shape, “We’ve never made doughnuts in our lives, what makes us think we can make B-shaped doughnuts?”. This becomes self-evident as Frank nearly haemorrhages in the kitchen, shouting “Rings or bees? RINGS OR BEES?!” as Tom gently pats him on the back and no one has yet questioned WHY THEY ARE PUTTING HOT SAUCE ON A DOUGHNUT.

When flogging them to the public, the aforementioned abomination has been changed to “Naughty But Spice”, but is so hot it nearly gives a woman a heart attack. There’ll be no Hollywood Handshakes or Prue Pats here.

The corporate clients are even less impressed with their products: the golden Bs look more like eights and taste like salt, whilst the Joey Essex lookalike from the hipster coffee shop baulks at the jizz-splashed lumps of dough with bits of bark ground into them. However, as Daniel points out “the inconsistencies are generally consistent”, which is sales speak for “They all look like shit”. Things are going better for Team Typhoo as Kayode proves himself to be a natural salesman, which impresses Claude who looks on like a doting dad. 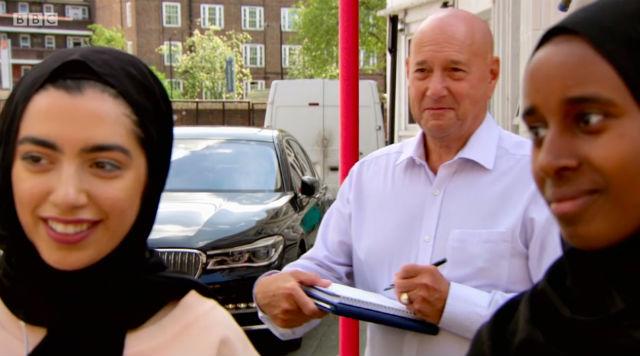 There are some fairly good jokes from Lord Sugar at aspiring actor Kurran’s expense, who has turned up with his arm in a sling (“You’re finally in a cast, then.”) It’s not really such a surprise that Tom’s passivity has not lead Collaborative to victory and instead to the Sad Cafe to finish off their stale doughnuts. Typhoon celebrate by flossing, which...just no.

We only hear from 3 people - Tom, Jasmine, and Frank, who all in turn deflect the blame onto someone else. After Jasmine points out that Frank got “emotional” during the task, Sarah (her with the eye piercing) finally gets the opportunity to say something for the first time in three episodes, only to have Frank scream over her, “I didn’t! Tell her, Sarah!”. Barely anyone else features the whole way through, so they get to melt into the background as Tom brings back Jasmine, for the sriracha, and Frank, whose biggest crimes were getting a bit flappy over the deep fat fryer.

Ultimately, the fickle finger of fates points at Frank, who after ten minutes of claiming he did not get too emotional, turns bright red and looks on the edge of tears after his firing. Poor Frank.
Does he thank him?

A very rushed and stunned “Thank you for the opportunity.”

Next week: the candidates must find a horse that recognises them.

Additional observations:
- Sabrina offering free donuts but for the same wholesale price would have made a good Brexit allegory, but I’d already used up my quota allowed per feature.
- I’m still not sure who Tom is, but then I’m not sure he does either.
- Frank said on You’re Fired that Kurran broke his arm at the house after a bout of arm wrestling, but I suspect it was a Joey-from-Friends type accident jumping off the bed.
More:  The Apprentice  Alan Sugar  The Apprentice Recaps  The Apprentice Season 14 Recaps  BBC
Follow us on Twitter @The_Shiznit for more fun features, film reviews and occasional commentary on what the best type of crisps are.
We are using Patreon to cover our hosting fees. So please consider chucking a few digital pennies our way by clicking on this link. Thanks!