I don't go to the gym. In a sense the street is my gym, but in another, more real sense, it's a street, down which I walk, not going into gyms, and eating Greggs ham and cheese pasties.

In an empty Royal Albert Hall, Sugar bothers to show up and tells everyone they're going to sell bodybuilding stuff to bodybuilders. This is because the first ever bodybuilding show in the UK was there. They literally booked the Albert Hall for that link.

This is a great idea because bodybuilders are the most insecure people on the planet and will happily buy a massive tub of powdered milk for £40 if you tell them it will finally silence the sound in their head of the bigger boys laughing at them. Kayode gets moved over to Collaborative because he sold well last week, even though both teams will be selling stuff so the reasoning behind this is lost on me. In the meetings Jackie puts herself forward for PM passionately, before admitting she knows nothing about bodybuilding, and Rick bullishly encourages people to vote for him, and the lowered hands are deafening, so everyone says fine, Sarah-Ann can do it.

Over with the other lot, Sabrina is PM because she is an actual tennis coach or something. The meeting is friendly and sensible, and she doles out tasks and praise in a way that makes everyone feel wanted, as if actually working in a real office with people. They all seem to quite like each other and appear sincerely motivated beyond empty tubthumping sentiment. It'll never work.

They have to pick both a thing and a service to sell. If I know the market, your cash cows are "tiny T-shirts to be worn in literally any environment, even a job interview" and "just one hug, just once in your life, from your father", but Sabrina's mob go instead for gym equipment (but, like, fancy gym equipment, probably) and spray tans, while Collaborative opt for home saunas and massages. When they're doing these ones, I always find it improbable that even someone who's come to a bodybuilding expo is likely to spunk a grand on a home sauna when they didn't expressly go there to do just that, but hey: I'm the first to admit it's not an area with which I'm overly familiar. Which doesn't mean I won't pour ignorant scorn on it. 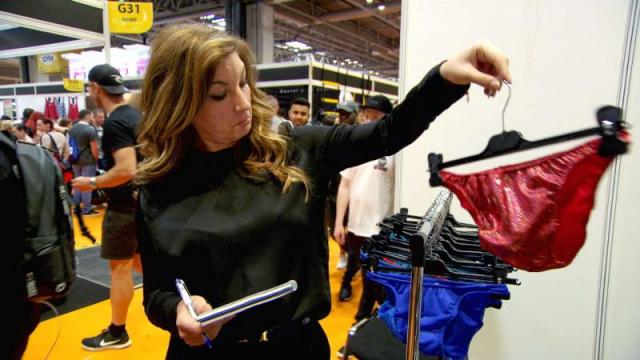 
Khadija reckons spray tans can't be that hard; you just point a thing at someone and spray them. This is of course a setup for them to get it all gloriously wrong, but it turns out she's broadly correct. After a couple of minutes of pointing a thing at someone and spraying them, they have essentially mastered it, and no one goes away complaining. It's interesting on The Apprentice that, when the teams get things right, the scenes are still edited with the visual and musical grammar of a disaster (cuts to customers looking a bit perplexed; a mocking clarinet). When the payoff fails to appear the editors just move on. It makes me consider further the mindset of those who apply to go on it: they must be aware of this but think themselves so special that they'll be the one to transcend it. No other show has narcissism baked so completely into its concept.

There was worry about whether massages, the lowest-cost service, would mean they'd have to do thousands of them, but trade is brisk despite Kurran, unable to massage because of his broken arm, instead just milling about listlessly and saying "All right?" to people every now and then. Saunas don't sell too well, and neither does the high-end gym kit, largely because Alex is awful at sales. Given that he is an IT analyst this is unsurprising, but still he takes umbrage at being moved onto spray tans late in the day because he hasn't yet sold anything.

There are lots of gratuitous shots of muscular women's bums, Kayode says "stay busy, get the Lizzy", and no one asks him what this means, and the narrator finally delivers on the reason she was included by referring to her as "Nut milk producer Camilla". Our work here is done.

Sugar sits down and sighs exhaustedly: "Right", with the enthusiasm of a man who has to renew his car insurance tonight having been putting it off for months. Alex, a sort of dime-store Will Poulter, gets flustered when justifying himself and continually argues that he didn't have the chance to sell anything because he was moved between sub-teams late in the day, despite the glaring point that this shouldn't have precluded him from successfully selling things beforehand.

Somehow the slightly shitter team wins, and Sabrina's team loses, despite her having fostered a good team atmosphere and in general made sensible decisions. Sugar tells Alex, in a quip astonishingly laboured on paper even before it tumbles clumsily out of his mouth: "I don't think you're cut out for bodybuilding." (No one, least of all Alex, has proposed that he is.) "Jean-Claude Van Damme was the Muscles from Brussels. You're more like the squirrel from the Wirral." I am disappointed to discover later that Alex is actually from the Wirral, because I really wanted this to be a 100% non-sequitur someone desperately flung into the script when out of ideas.
Who got fired?

Sabrina brings back Alex and Sian, but there's only one obvious candidate for a fingering this week, and it's Alex. He's 21, I find out later, and you get the impression that once he's grown out of the overconfidence he'll be fine. It's all there in the eagerness to get things right (he was unfairly pilloried earlier on for being too precise with his questions to the gym equipment vendor) and in the gulping panic he exhibits when out of his depth. Anyone who reacts that genuinely, rather than trying to mask it through bluster, is fine by me.
Does he thank him?

Yes, a swallowed "thank you for the opportunity, Lord Sugar", and a scuttle for the exit. Sugar teases a second firing, then lazily gives up on it without bothering to ratchet up any tension, then heads home to definitely not take out a superinjunction against the Telegraph for workplace bullying and racism he definitely hasn't perpetrated.

Next week: the team have only 48 hours to navigate Lambeth Council's website and secure the delivery of a food waste bin.