Fly me to the goons

I'm happily watching the snooker on ITV4. It's an engrossing second-round match in the Champion of Champions tournament in which Kyren Wilson is opening up a confident lead over Judd Trump, and I'm nicely settled in after dinner and oh, what's this notification on my phone? Why, it's a Google Calendar reminder to OH SHIT I'VE GOT TO WATCH THE FUCKING APPRENTICE

The ITV4 coverage is great too. It beats the shit out of the BBC's, partly because Clive Everton's on it and he understands better than anyone that the key to snooker commentary is to say very little, throwing into sharp focus John Virgo's ruinous histrionics when he's trusted with the microphone. Snooker isn't a sport that needs an injection of drama: it's already right there on the baize. And another ... what? But I ... fine, OK, I'll talk about The Apprentice.

(*sighs*) They go to City Airport. It appears they've shut down its only runway for this. I mean, seriously, how much did that cost? Every time Sugar fluffs his autocue line that's another flight to Dubai put back. They have to come up with an advertising campaign for a budget airline, including a TV advert, the branding and the uniform.

It emerges quickly that, despite my having watched two episodes already, there are two contestants in this whom I've never seen before. A man with a chinstrap beard and a woman on the opposite team with dark hair. I learn later that they are called Tom and Jasmine. I know we've documented here that people always take a back seat in the earlier rounds and aren't showcased because of the editing restrictions, but I'm honestly not exaggerating: I have never once clapped eyes on either of these two people. Were they introduced as new contestants last week in a shock twist? Have they just spawned like sprites in a video game?

Sabrina is the PM because she's just done a travel video, even though I thought she was a tennis coach but fine; it gets us closer to the end. Kurran has had the responsibility of PMhood thrust upon him, like a child king, and yet acts like he wanted it all along. "Everything I've done in my life has led to this moment," he says. In a sense this is true, just as it would be if you were eating a bag of crisps, but I wonder how much of his life has been spent coasting through sales jobs once he'd worked out that affecting an air of mystery was enough to stand out. He doesn't like the idea of a party airline, but on meeting overwhelming resistance (and having been told by the producers that the other team have taken the business airline idea so he can't) he pretends to consider it deeply for a moment before going with it.

It'll be the mid-session interval in the snooker now. Alan McManus, a thoughtful and detailed analyst, is probably using his Alan's Angle slot to highlight how the Ricoh Arena's super-fine cloth is forcing the players to adjust their cue actions to avoid overrunning and losing position.

On the other team, Jasmine, for that is her name, has directed a music video, so quite reasonably wants to direct the advert. Sabrina wants to do it herself though, so Jasmine instead just sort of takes over and directs it anyway. I'm not sure whose side I'm on: it's a plainly wrongheaded decision and yet barging in like this isn't really cricket, especially when Sabrina's on the receiving end, because she's one of the few who's actually effective and sensible.

In Southend, Kurran's mob are on the beach to shoot their advert. They've storyboarded it in advance but he decides to rewrite the entire thing in his head. In fairness to him his idea can't be that different, given that they were already going to shoot an advert for an airline on a beach with a crew who'd been pre-booked weeks in advance. Khadija does a bit of whooping after a shot and he's a gigantic dick to her about it, later saying to the camera: "She got a bit lippy but she's not used to this game: not many people are." I don't know what game he means. I wish it was snooker. 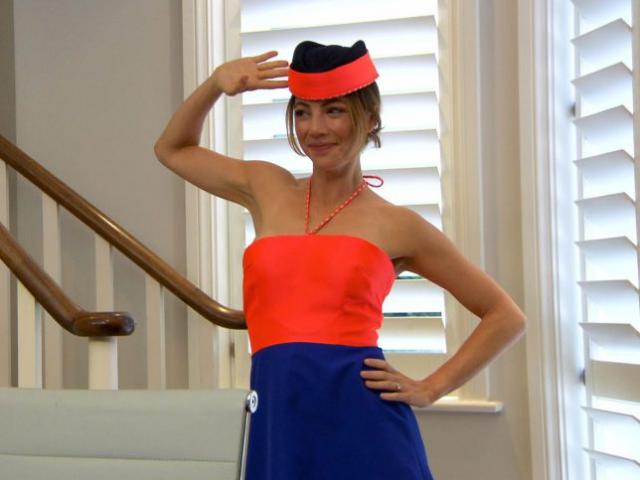 This is probably OK, right? I mean, even in the current climate? (*looks at Twitter*) NOPE


Against Kurran's express wishes, Jackie and Camilla go with Jetpop as a name, setting up one of those classic Apprentice tropes where they will later be criticised for calling to mind an exploding plane, and so film lots of team members expressing concern about this then edit it in earlier so it looks like it occurred to everyone at the time.

In the pitches at BA HQ, Kayode does the intro and is great at it as he always is, making you question whether the PM's initial choice to shut him out of it has been fed to them to create tension. Their Manage-air advert and pitch is pretty good despite the awful name and logo: they get some laughs but Kayode deals with it all brilliantly. The Commercial Director of BA has obviously seen The Apprentice before and knows to roll his eyes and pull a face full of incredulity as often as possible so they can edit it in when one of the brand's weaknesses comes up.

Sugar phones the airline people to get their take on it, sportingly putting in an extra two minutes on top of his usual 20-minute shift. It's in these exchanges that I always wonder whether fellow businesspeople hold him in any regard, or just wait patiently for him to read jokes off his script like "So not so much 'fly me to the moon' as 'Fly with a bunch of loons' then", before saying "Yes, Alan" and hanging up as soon as they possibly can.

Much is made of the decision to use Highway to Hell on the Manage-air advert, as it was by BA's eyeroller-in-chief, and Sugar zeroes in on this as well as Kayode's joke in the ad: "What comes before part B? Part-AY!" He doesn't think this is funny. No one, seemingly, has picked up on the fact that it's deliberately unfunny: this and the song were supposed to illustrate the bad experience the customer in the ad had on another airline before choosing Manage-air and having a better one.

He is also very big on "What I call fresh eyes": the idea of looking on an advertising campaign as your customer would. I have never met anyone who did not already understand what "fresh eyes" means. Typhoon wins, by virtue of him saying they won, having "spoken with the experts for a long time" (the aforementioned two minutes). "If there's one thing you've learned," he tells Collaborative, "it's the terminology 'fresh eyes'."

He sends them out to the shame cafe, telling them: "One of you will be checking out for sure." You don't check out of a plane, Alan.
Who got fired?

Kurran brings back Khadija and Camilla, and is then massively condescending towards them when fighting his corner. "Can I deal with Khadija and then I'll deal with you?" he says to Camilla in the throes of the argument. Khadija, to her huge credit, points out that they are both fully grown women.

Sugar calls Khadija argumentative, because she's a woman defending herself against unreasonable attack, and then fires Kurran. This is of course the correct decision and entirely in-keeping with Apprentice protocol: the slightly enigmatic, most insufferable one usually goes out around week six, kept in for the hate-tweets and OMG articles in Metro Online, but always known not to be an actual contender.
Does he thank him?

"Thanks for giving me a shot, Lord Sugar," he says, and it's not one I've heard before. It's the most creative thing he's done in the whole process. Presumably for continuity because of his sling, he even gets his own newly-shot taxi exit rather than the ones they shoot at the start in a batch, with scarves on to cover the fact they're wearing a different shirt than the one they got fired in. I turn back over to ITV4 to see Kyren Wilson polishing off a total clearance of 131 in the sixth frame to go 5-1 clear, which he then converts into a 6-1 victory in short order.

Next week: at a cost of over a billion pounds, the teams are summoned to the International Space Station to be told they'll be opening up a Space.NK franchise in Bermondsey, and I'll get to watch the snooker AARGH IT'S FINISHED BY THEN