In many ways, good leadership is a lot like gardening. You need to plant seeds of ideas, nurture growth, and sometimes get your hands dirty. You need to trust the process, and have patience whilst rooting out weeds in order to flourish. Or if you’re Lord Sugar, just pour salt on the earth so that nothing beautiful can ever grow again.

It’s Gardening Week - “FINALLY!” I hear you yell. Lord Sugar informs the teams they will be starting up their own urban gardening business, which is a fancy way of saying “you’re going to move some plant pots around on rooftops because there’s not enough budget to go outside of London.”

Naturally, Tom the tree surgeon makes a bid to be PM, but only if everyone absolutely agrees, even the candidates on the other team because he’s so democratic. Lord Alan puts Daniel in charge of the other guys, and at this point I have no idea which team is which anymore. Everyone has swapped around so much, I don’t know what constitutes the essence of Collaborative, or what makes up a Typhoon. It’s as almost as if it doesn’t matter.

Almost immediately, Jackie and Khadija start arguing as they vie to be sub-team leader, which Daniel bestows upon Khadija on account her having experience quoting for jobs, over Jackie's tomatoes. The first 15 minutes are basically the two of them circling each other like scorpions, clashing over who worked out the price of the window boxes and constantly sniping at each other. Which is perfect for Jackie, whose favourite task is trying to identify who’ll she’ll throw under a bus later, whilst quietly self-sabotaging and pointing out Khadija’s mistakes to rely on as evidence later in court.

On the other team, sweet Kayode is bouncing around looking for business dressed as though he’s on the way to see Wales in the rugby, followed by an appalled Jasmine and Sian. As plinky-plonky music plays in the background, Jasmine questions Kayode’s pricing and what he’s promised to the client, making the whole thing look like an adult version of Bill and Ben, with Kayode as the weed. 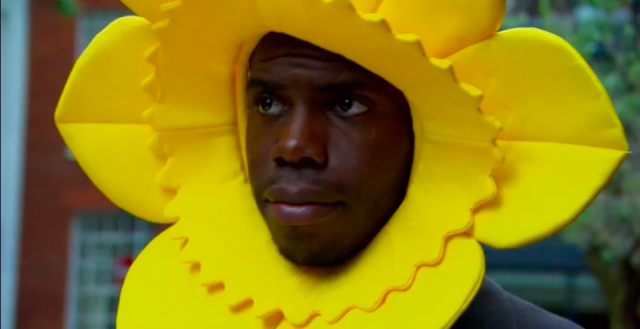 He must be wondering if all this is worth it

As both teams get stuck in, it’s painfully clear no one is cut out for this task, not even Tom who does this for a living. He leaves Sabrina and Jasmine in charge of making an office’s roof terrace look ‘sophisticated’, which they take to mean scattering a few lonely pot plants around and call it “minimalist”. Meanwhile, Tom neglected to tell the delivery van where they were, meaning they start their own job power-washing down that boat bar on the Thames late, resulting in them losing money.

Daniel’s team are decorating a rooftop bar, but after promising a urban jungle leave it looking like a rundown greengrocer’s, complete with fake grass draped over the bar “just for aesthetics”. This is after he makes a conscious decision not to separate Jackie and Khadija, who waste two hours trying to work out the jet wash and so instead opt to swish the dirt around with a watering can, leaving the irate owner to ask them to leave immediately.

Unbelievably, Tom loses the task with Daniel’s team (Typhoon? Collaborative? Who knows) nipping it in the bud. Tom lays the blame with Sabrina, for not knowing how to garden, and Kayode, for under-selling garden containers. I think this might be the worst task ever.

It’s another regretful firing from Lord Sugar, who doesn’t think Kayode has what it takes to carry on with this shitshow. Filming is temporarily halted as Claude rips out a runner’s spinal cord in frustration and lack of appropriate way to display his feelings.
Does he thank him?

A very curt “Thank you”

Next week, the contestants must buy all the Christmas presents for my family, because I haven’t got a clue what to get anyone.

Additional observations:
- Tom called Kayode out for being unprofessional for calling him a donut, when what's actually unprofessional is Jackie's pleather trousers