The Apprentice: season 14, episode 8 recap: "Don't Make an Exhibition of Yourself"

I worked in an art gallery for a year or so. A guest at an event once asked me to order him a taxi, so I called a minicab, then when it turned up outside he obviously thought it was too downmarket and so pretended he didn't realise it was for him and continued to wait in the foyer. I let him sit and wait. He sat there for a good ten minutes before it drove away, then another five before he wandered over and asked whether his taxi was on its way. "Oh, you mean the minicab that was outside?" he said, feigning a puzzled look, when I told him it had just left. "I presumed that couldn't have been for me." And the moral of this story is that all art galleries should be burned down.

So we're off to Glasgow and its thriving modern art scene, where Lord Sugar gives out the task on screen because he's been "called away on some very urgent business". Annoyingly, I've just discovered that he gives his fee for the show to Great Ormond Street, which makes any criticism of his commitment to and performance in it a bit churlish. And yet I'm still going to do that.

They have to choose a contemporary artist each and sell their works to a corporate client and the guests at a gallery. There's a classic Apprentice moral about to be taught, surely: that blustering your way through something without the knowledge to back it up never produces results. And yet ultimately it sort of does. It's as if The Apprentice isn't the place to go to learn valuable life lessons.

Chinstrap Tom's father and sister are artists, so he fancies a stab at PM, but Jasmine pips him, while Jackie minored in fine art and has sold one of her own paintings for $20,000 in the past (this is mental and doesn't get anything like the scrutiny it should've), so she's the natural choice for the other mob. The teams are all set up pretty amicably, but they begin to establish the episode's main narrative: that Sabrina is troublesome and hard to work with.

They drive off to begin the task in four massive people-carriers for nine people, like they're the Rolling Stones on tour. Can we have a more realistic budget Apprentice soon, where someone gets one of the pricier Pret soups for lunch while on a customer visit and then gets an email with the subject line "***SOUP***" when they try and get it through expenses?

They meet the artists and Daniel shows a flair for interpreting art which ingratiates him with one (he admits he's blagging it, but he's very good at it), and Tom does less well, telling her "to me feelings and emotions are deep" in response to her work. This is of course untrue: he hasn't experienced an emotion other than frustration that his car isn't faster and redder. 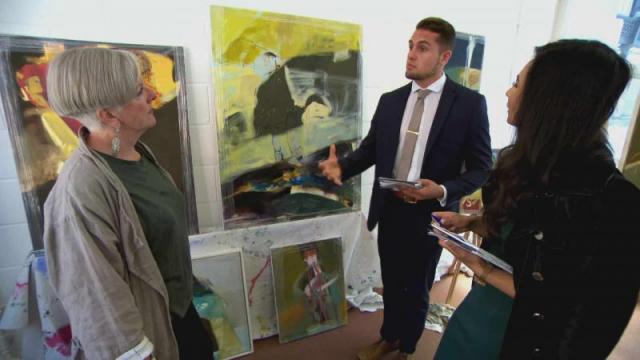 "Your work challenges preconceptions, like how I challenge the consensus on beards having to include moustaches."


Khadija, Camilla and the other one meet their corporate client, who want art for their showhome that demonstrates their sound systems. The one with the eye piercing tries to speak to them when the music's on, and we're encouraged to think she's in the wrong, but in fairness to her they're acting like cult members, serenely blissed out on the stereophonic experience and looking at her unblinkingly. I'd have backed out of the room politely before they started on about the sacred texts.

In the gallery, a couple of minor mistakes are made but an effort is afoot to make Sabrina look like a disruptive influence. She errs by trying to sell merch tea-towels in the gallery space but in general does her best. I mean they're selling tote bags for 25 notes, ffs. Daniel is great at selling the art, making up some supreme bullshit on the fly, which everyone laps up. (I used to do the same, less successfully, when asked by a guest what an artwork meant, and in my experience people do generally swallow whatever you say unless they're only asking because they want to contradict and humiliate you, which is far from unheard of.)

The sales of Tom and Sabrina's sculptures go less well, which might be because they aren't all that imaginative, or because Tom isn't. Probably a bit of both. While the corporate clients from a hipster office deliberate on the purchase of a Home Sweet Home sign in gummi bears, someone else buys it, at which they're disappointed. Something interesting then happens in that we've been fed the story that Sian and Sabrina, who met these clients earlier, shouldn't have then been cut out of the actual sales pitch by Jasmine, and the clients say "I really would rather speak to Sian and Sabrina." Sian then turns up, gives them some guff about why they should buy a tin owl for a grand, and despite having been obviously non-plussed five minutes ago the guy says "You've articulated it much better, so I'll take it."

Now: it's wholly unconvincing that he actually wants to buy it, but they've followed this narrative through so it needs a conclusion. Either the producers asked him to say it, or it was unprompted and so they went back and edited everything to create this narrative. Christ, I wish I didn't care.

Everyone is quite good-humoured and takes Sugar's shit jokes well, except for when he says to Tom: "You're more like Damien Worst, never mind Damien Hirst." Even Tom can't crack a smile at this. It occurs to me, after three seasons of this rubbish, that maybe the idea is that they're deliberately awful dad jokes and we're meant to groan good-naturedly, but if so the context hasn't been established for this and they can only be received as what they are: painfully bad, and delivered with the facility for humour of a man gushing blood from a neck wound.

Sabrina gets it in the neck for not toeing the line, continuing the main story, and Sugar criticises Tom and Jasmine for selling the home sweet home gummi thing to a guest rather than the corporate client. For the same price, presumably, because it was written next to it. Guaranteed there will be, in Alan Sugar's Big Book of No-Nonsense Business Mantras, which I don't know exists but does and is a quid in The Works, a phrase along the lines of "It doesn't matter who you bloody sell to. Just bloody sell the bloody thing. Bloody."

Anyway, Jackie's lot win, and Claude says they've achieved a "wonderful total", looking prouder than he has since his infant son first strangled a rabbit.
Who got fired?

Sugar misquotes Andy Warhol, then says to Jasmine, confusingly, "You say all's fair in love and war," (she has never said this to my knowledge) "and business is a war. Well, you've lost this war." He then fires her, effectively tells Tom he's a twat, and says to Sabrina: "Young lady, go back to the house", shooing her away with the back of his hand. I've decided I don't like Lord Sugar all that much.
Does she thank him?

Yes, before an ice-cold no-look handshake with Tom in reception. The credits roll and Sugar pops up inviting applications for 2019. They're going to do it again. Christ, just cancel it, or refresh the format, or get someone less racist and more capable of stringing together basic sentences to front it.

Next year: Clive Lewis's suggestion for BBC editorial officials to require election to their posts will be in force, and I'll be able to stand and win by promising I'll never allow political programmes to accurately report things that Jeremy Corbyn says and does and thus show him in a bad light, and I'll then use this power to hire a Sugar replacement. Like Canderel.