Ooh, a race row, this ought to give the whole thing a much-needed positivity shot in the arm.

The Google homepage in Chrome on my phone is in the habit of suggesting an article for me at the bottom of the page before I begin a search, prompted by stuff in my search history. I mostly get stuff about snooker and "shock revelations" about the Beatles. ("John Lennon CHEATED on his wife!" Yeah, cheers guys. Enjoy your 0.003p.) Now it's the autumn again and I have to Google things to do with The Apprentice (generally along the lines of "what are their fucking names", "apprentice cancelled please god" and so on), it serves me up the odd spoonful of Sugar too. The algorithm is not yet sophisticated enough to determine that you are searching for something which you enormously dislike; perhaps it could start to measure and incorporate the force of keystrokes as an indicator toward this.

This week: "Apprentice in new race row", said The Sun. Well this sounds like a barnburner. What's he going to do? Let the mask slip again like he sometimes does on Twitter? Maybe he'll refer to paella as "dago rice", only this time a vindictive editor's left it in?

Not on the set of Matilda the Musical, surely. Here they are on stage at the Cambridge theatre, all decked out with its innovative moving classroom set, and "business's greatest showman" arrives to say something or other about imagination, then stand awkwardly as a series of school desks emerge from the floor, before carrying on as if nothing had happened. They've got to make toys and sell toys and make a video in which they'll be encouraged to make fools of themselves in costumes so they can be later criticised for making fools of themselves in costumes. (Another article Google served me up today is Cosmo's shock scoop in which a former contestant claims that producers sabotage the tasks. Water, I have also heard, is often a bit wet.) 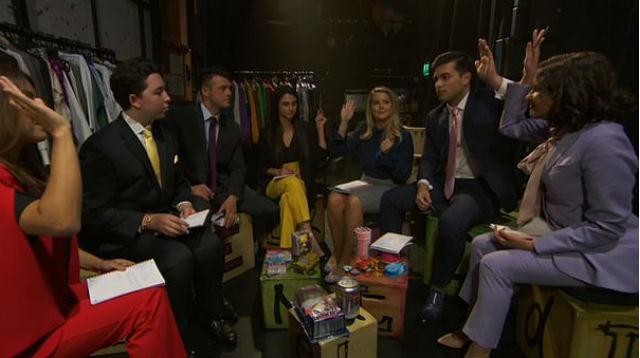 "Hands up if your motivations for participating in this godforsaken racket are unclear even to you!"


There's a glimmer of hope on one team, when Lottie's team name suggestion "Polaris" is shot down (fnar) for being too aggressive, in favour of "Unison". It suggests collaboration rather than hostility, and what's more I imagine Len McCluskey will be delighted with the brand association if he notices it inbetween rigging leadership elections, so it's win-win. The others are Team Empower. We're on track for a multi-participant respect-off! Fetch the beanbags and we'll all sit in a circle with camomille teas listening to Moon Safari by Air and tell each other how much we admire each other's ability to achieve results under challenging conditions.

This is where I should upend this expectation and reveal that in fact it got so hostile that one of them kidnapped another at knifepoint and their lifeless corpse was later found wrapped in clear plastic in the woods, but no, I'll give it its due: accepting that this is relative to the inherent ugliness of the framework in which it operates, there were some rare examples of colleagues affording each other respect this week. Thomas, for example, whose market-seller character must have felt a gift to the producers because they expect him to be thick and unyielding, turns out to be one of the few contestants who actually takes criticism on board: he loses his pitch to be PM but takes it with a laugh and gets on with it. He's a bit of a blunt instrument when it comes to what nuances there are to sales, relying largely on relentless positivity instead of attempting to refute evidence that the product is in fact shit, but he knows what he's good at and doesn't stick his oar into what he isn't. 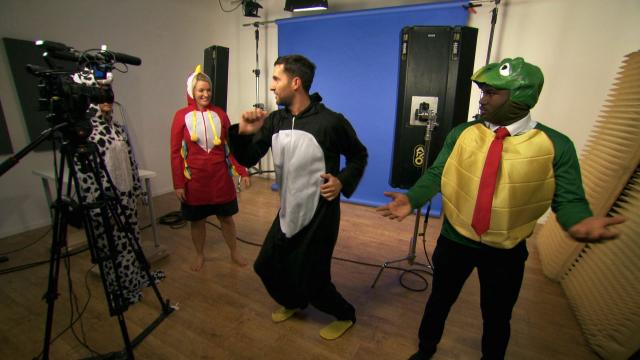 Dance to the decadence dance


Riyonn, meanwhile, in charge of creative, actually asks for people's ideas on the logo and either uses them or explains why he won't. Pamela explains tactfully to Lewis (whose name I could've sworn was Dean, and so I called Dean while making notes throughout) that while yes, he may have a degree in marketing and so on paper might expect to be on that subteam, he's lost the last two tasks and so it's not unreasonable of her to have more confidence in someone else.

SugarJokes: Team Empower "sounds like a mobile phone charger" (mobile phone chargers don't have brand names, Lord Sugar, they're just called mobile phone chargers: the premise of the joke doesn't bear the least scrutiny). One toy was a turtle, so he says something about "coming out of your shell", which everyone misses, and later says "I call this turtle crap, not total crap", which isn't how puns work: if it needs reinforcing at all, which in this case it doesn't, you remind the audience of the familiar phrase somehow so that consensus is built, before introducing the play on words that subverts the shared understanding. You don't do the play on words first and then the oh forget it

Somehow, even though Dean is called Lewis and they pitched to John Lewis, there is no SugarJoke along these lines, which makes me think there'll be a junior writer somewhere with a pukka pad crammed full of failed drafts of one, desperate to shoehorn it in later somehow.

Anyway, one lot wins and the other doesn't.
Who gets fired?

Riyonn brings back Lottie and Souleyman. In consultation with his henchpersons, Sugar refers to her as "young Lottie", which is the sort of phrase that in context you can't quite demonstrate is sexist but you know definitely comes from that place. Where's the race row though? Is he going to deliver the firing in full minstrel fancy dress? Ah, right: he fires Souleyman, meaning everyone he's fired so far has been from a BAME background.

"So what?" says everyone with a St George flag in their Twitter username, not that I've checked but it's not like I need to. "When three white people get fired no one says that's racist, do they?" This is, of course, not how racism works, but in any case I'll double down: if it means The Apprentice gets cancelled before Christmas and I don't have to watch it anymore, I'm absolutely of the view that the show is racist, that three of its producers burgled my house and that Karren Brady killed a man in Superdrug last week.
Does he thank him?

He just mutters something inaudible under his breath, which could be a thanks but equally could be a signal of intent to contact the Equalities and Human Rights Commission. Next week: the teams must upgrade the National Rail app so it doesn't fucking load an ad at the top making the whole screen move down a bit so you end up tapping the wrong thing every bloody time without fail.