The story so far: Supernatural

This article is best read whilst blaring out some 80s rock anthems. Possibly ones you'd listen to whilst driving a '67 Chevy. Personal recommendation: Carry On My Wayward Son by Kansas.

For those of you that don't dabble in the greatness of the Winchesters, nor bask in their radiant beauty, you probably won't know that Supernatural, home to demon hunters Sam and Dean Winchester, has recently returned to UK shores for its sixth season.

After the success of Season 5, old hat Eric Kripke decided to stand down from his lead writer position, giving second in command Sera Gamble a chance to take the helm, and subsequently it's all change for the Winchester brothers. But, in order to see the noticeable differences, I think we need a quick whistle-stop tour of Supernatural. So, without further ado, here be some great, massive ***SPOILERS***.

Young law student Sam Winchester is head over heels for his beau Jessica and everything is sunshine and roses 'til she is supernaturally burnt to death on a ceiling. Nice. Cue older and roguish brother Dean, who begs for Sam's help in tracking down their missing father. Sam chooses vengeance (like any good hero would) and joins Dean in the search for Papa Winchester (aka John), whilst hoping to find the demon responsible for Jessica's death.

With help from John's journal they encounter everything from ghosts to lycans to witches to shape-shifters and, to be honest, plenty of other weird shit too. We establish that Dean loves his car (a black 1967 Chevy Impala), 80s rock music, beer and women. Sam is kind of a stick in the mud...sorry ladies.

Anywho, with help from surrogate father and fellow demon hunter Bobby, the dynamic duo eventually track down John, who in turn is tracking down 'Yellow Eyes' ' a demon responsible for the death of the boy's mother and Jessica.

Season finale: They all get hit by a massive truck. Bam. 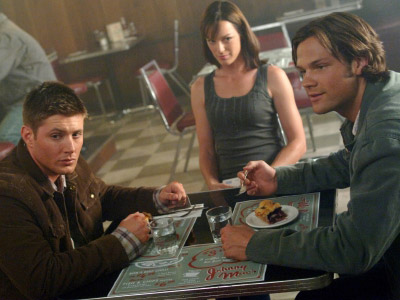 But not before getting some much-needed pie.
Season 2

Season 2 begins with the aftermath of the car crash, where Dean is in critical condition. Thankfully, Papa Winchester agrees to sell his soul to Yellow Eyes in exchange for Dean's life. Done deal.

The rest of the season is made up of a MOUNTAIN of demon fighting, Sam getting a little weird and experiencing what appears to be 'psychic visions' and the brothers trying to vanquish Yellow Eyes, thus avenging their father's death.

Then we find out that Sam is a 'child of Yellow Eyes' and drank his blood as a kid, which explains his powers and why Yellow Eyes burned poor Jessica to a cinder. Apparently. Following this discovery, a big show-down between Sam and the yellow-eyed demon's other 'children' ensues and our hero ends up on the wrong side of a dagger. Then Dean sells his soul to save Sam. To summarise, season 2 is essentially a whole soul-selling fest.

Season finale: With Sam resurrected and with the help of a pretty demon-killing gun known as 'The Colt', the brothers manage to vanquish Yellow Eyes. Oh yeah, and they inadvertently open the gates of hell for a few milliseconds too. Whoops.
Season 3

With only a year left for Dean to live (thanks to his soul-selling), the Winchester boys spend most of their time trying to find a way out of the deal he made, but it proves to be rather difficult. Even with the help of a supposedly 'good' demon called Ruby, the brothers struggle to find a solution to the problem and although Dean quickly comes to terms with the fact that he needs to make the most of what precious little time he has left, Sam refuses to give up.

Suffice to say, they both say each other's names in dramatic manly voices a lot:

You get the gist.

Season finale: Dean gets dragged to hell by a gang of snarling hell hounds. And a bad-ass demon known as Lilith comes to town. 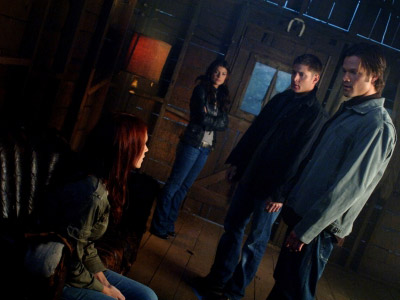 There's a lot of uneven flooring in Supernatural.
Season 4

Dragged from the pit by a mysterious creature, a battered and bruised Dean Winchester is back ' much to the surprise of his brother. With some hardcore research, the Winchesters and Bobby soon find the strange crusader who pulled Dean from the fire: an angel by the name of Castiel. Castiel wears a trench coat and believes the apocalypse is coming and that Dean is the only one who can stop it.

It's not long before the brothers discover that a lot has changed in the 3 months that Dean's been imprisoned in hell. Whilst the sultry older Winchester is suppressing his memories of what went on down there, Sam is clearly damaged from the agony of his brother's death. With only Ruby by his side, Dean soon finds out that Sam has been drinking demon blood to gather strength and increase the powers that Yellow Eyes gave him. Not such a stick in the mud anymore eh?

Season finale: Unfortunately it turns out that Sam has gone a bit too far south of normal and Ruby has been working with Lilith all along to lure him to the dark side. Sam is tricked into killing Lilith and in turn, her blood opens a portal to hell and releases Lucifer.
Season 5

Lucifer is now free from the pit and it's not long before all hell literally breaks loose. The odds are stacked up against them, the Four Horsemen of the Apocalypse have emerged and the demon horde is getting stronger. Even with an angel and a cluster of demon hunters on their side, the Winchester brothers seem unable to stop the inevitable.

To make matters worse, Lucifer is keen to use Sam as his vessel and in doing so, will reach full power. With Sam's questionable past, everyone is just waiting for him to say yes to the devil.

Season finale: Sam drinks MORE demon blood and lets Lucifer possess him, thinking he'll be strong enough to take control whilst Lucifer is inside of him. Sadly this plan only works at the last minute when he sees Dean. An epiphany seems to strike Sam and he is able to take control of his body long enough to drag himself and Lucifer into the cage of hell. Dean is grief-stricken and sets off to try and lead a normal 'apple-pie' life.
Now just try and tell me you don't want to watch Season 6. Catch it Wednesdays, 10pm on Sky Living.

More:  Supernatural  Sky Living
Follow us on Twitter @The_Shiznit for more fun features, film reviews and occasional commentary on what the best type of crisps are.
We are using Patreon to cover our hosting fees. So please consider chucking a few digital pennies our way by clicking on this link. Thanks!