No doubt you have already seen the impressive theory online this week regarding the origins of Andy's mother in Toy Story? It's very convincing, but pales into comparison to the mind-blowing discovery I made upon poring through the Pixar archives for clues. It turns out that there is lots of evidence to suggest that Andy's absent father is actually none other than... DARTH VADER.


I know, the thought of Andy's father actually being space tyrant Darth Vader aka fallen Jedi Knight Anakin Skywalker is indeed shocking. But it makes perfect sense. Let's look at the mind-blowing facts.

Andy's father is absent throughout all three Toy Story films. If we are to assume that the Toy Story timeline roughly corresponds with the timeline for the original Star Wars trilogy, then this would explain Andy's father's absence - because he was attempting to quell the Rebel uprising in a galaxy far, far away. It makes perfect sense when you think about it. The timelines overlap perfectly. 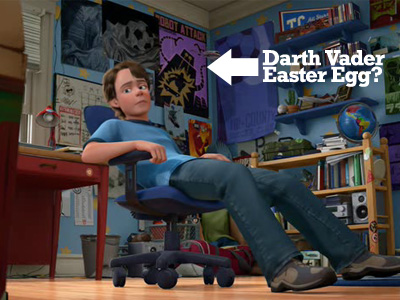 Furthermore, Andy's Mom never once mentions Andy's father – this is because she's protecting him from the truth, much like Obi-Wan Kenobi did with Luke, Andy's brother from another mother. If Andy were to find out his father was in fact a devious despot from another universe with the deaths of millions on his hands, it'd probably distract him from his school work.

Subconsciously, however, Andy seems to have an inkling to the identity of his father, as evidenced by his ownership of the Zurg action figure – an obvious stand-in for his own, darkly-visaged intergalactic megalomaniac father, Darth Vader. As Andy plays with Zurg, the makers of the film are drawing subtle comparisons to the Star Wars universe – he's attempting to interact with the father he never knew without even knowing it. Blow your mind much? 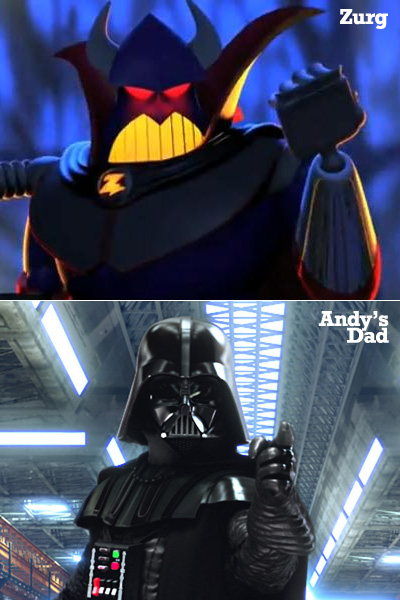 We already know from the Star Wars movies that Darth Vader is capable of fathering a child, and we know that he has commitment issues, as evidenced by the fact he abandoned his twin babies while he furthered his attempts to discover ultimate power and rule the cosmos. In other words, he's actually the kind of relationship-phobe who'd get a woman – Andy's mother, for example – pregnant, then leave her to raise the child alone. Sound familiar?

In case you're wondering how Vader could father a small boy in the Earth sector while simultaneously attempting to crush the rebels of the space station Yavin in a quadrant at the opposite end of the universe… Ever heard of a little thing called the Force? That shit lets you do anything.

The parallels between Andy Davis and Luke Skywalker are obvious when you realise their genetic connection. Both are young men. Both have floppy hair. Both have a desire to realise their true destiny (Andy by going to college, Luke by embracing his fate to be saviour of the universe). Both men live on a planet with at least one sun. At various points, both men utter the words "and", "if", "then" and "power converters". My mind was blown when all the pieces started coming together. 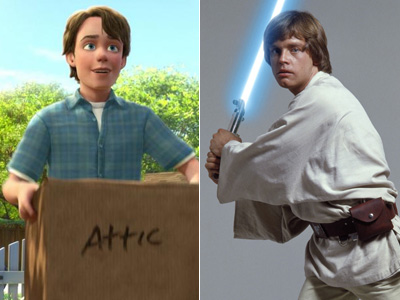 It's so OBVIOUS I feel like a FOOL, fuckin' idiot idiot IDIOT


The fact that Disney recently bought the rights to the Star Wars universe from LucasFilm is seemingly confirmation that Andy's father is indeed Vader, the disgraced former Jedi Knight who went on to rule the galaxy with an iron fist. As of yet, Disney and Pixar are clearly playing down the connection as they don't want to muddy canon ahead of the release of Episode VII in 2015 – as of the time of press, neither organisation had offered official comments in the comments section below, or even created accounts to do so. That speaks volumes.

But now you know the truth, you can rewatch the Toy Story movies in full knowledge that Andy's absent father is indeed the most feared leader in all the galaxy. Mind = blown!

More:  Star Wars  Pixar  Disney  Darth Vader  Toy Story
Follow us on Twitter @The_Shiznit for more fun features, film reviews and occasional commentary on what the best type of crisps are.
We are using Patreon to cover our hosting fees. So please consider chucking a few digital pennies our way by clicking on this link. Thanks!