When did Nile Rodgers meet all these X Factor finalists in Ibiza? Were we supposed to have watched all the auditions and six-chair challenges and judges’ houses stages and stuff? These questions and more not even close to answered as we arrive at one of the highlights of the X Factor calendar: Movie Week! It’s right up there with Big Band Week and Good God Has John Legend Got Another New Album Out Week.


Saturday night
Before we settle down to enjoy judges incessantly asking, “Which movie was that from then, Simon?” there’s just time to remember what this weekend’s really all about. Let’s take to Twitter where leaf-wearing, Cowell-bearding, ‘Big Red GTO’ songstress Sinitta has some sage words: 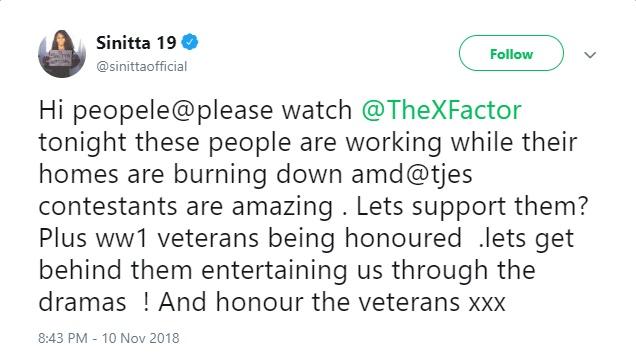 
Beautiful. Got a bit of something in my eye. Possibly the missing sense.

Back to Movie Week, where the mentors traditionally exercise their imagination to the max, pick a song they’d like their charges to sing and then desperately scrabble around trying to find a movie it was in. But not this time! No, this time there’s a whole new gambit. “Simon,” scoffs Dermot O’Leary after the mohair-chested cuboid bringer of pop uniformity has disparaged Misunderstood’s choice of a song from Flashdance that’s not ‘Flashdance… What A Feeling’. “Not everyone can come up here and do a Greatest Showman song.”To which the only answer is, “Au contraire, Dermot.”

There’s the odd moment of suspense though. Simon introduces Scarlett Lee with a build-up that promises a performance “from the biggest movie at the moment, with the biggest song in the movie” and everyone prays hard for ‘Bohemian Rhapsody’ until she comes on and delivers ‘I’ll Never Love Again’ from A Star is Born. But she does it beautifully, with feeling (man), gives me a shiver on the key change, and, jesus I’m losing my edge.

Brendan Murray helps me find it again and sets my teeth on it with a piercing rendition of REM’s ‘Everybody Hurts’ that might just bring the band back together simply by finding the precise frequency that rearranges their molecules enough to place them on exactly the same stage at exactly the same time. “You brought me to tears in Ibiza,” reveals Nile, which would be intriguing enough on its own, but 20 minutes earlier he’d also told Dalton Harris, “I first saw you in Ibiza and you blew me away.”What in god’s name happened in Ibiza?

We’ve not really discussed Anthony Russell these past few weeks. Let’s not change that, but suffice to say he looks like what might have happened if Damon Albarn and Liam Gallagher had resolved all that sexual tension in the mid-90s and actually mated – and then whacked the result over the head with a spade. To Sunday! 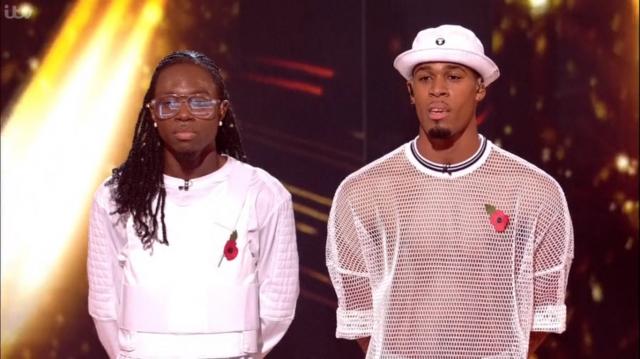 
Sunday night
Michael Bublé’s here, crooning ‘When I Fall in Love’ just to see if he can get away putting the same dozen songs on every album every year for a second successive decade. He’s matched in the artistic value stakes by another ‘friend of the show’, Olly Murs, who, well, look, I zoned out.

But this isn’t just about welcoming mediocrities onto the show, it’s about booting them out too, which makes it all the more surprising that decent R&B duo (and unlikely Ashley Banjo/Lil Wayne pairing) Misunderstood are first out when the public votes are counted. Wrong Louis said they weren’t “my cup of tea”, but that’s a good thing, isn’t it? It’s usually got catering staff expectorate in it.

Does it go to DEADLOCK?
No. It’s a second successive week in the sing-off for “we forget how young you are” Acacia & Aaliyah, but they’re in luck because Giovanni decides to save his bacon by squealing absent judge Robbie Williams’ ‘Let Me Entertain You’ like a stuck pig. Ayda contractually enjoys it; the other three waste no time in ushering him out the door. But wait! Gio’s grabbed the camera and he’s got something to say: “Rock’n’roll is alive and well and you know where to find him!” Yep. Next summer, local festival bill, around lunchtime.

Next week
Presumably Mickey Bubbles Bublé is coming back again, because it’s Big Band Week and, to be honest, I didn’t think he existed outside that. Mind you, he was on Graham Norton the other night too. Maybe everything is Big Band Week and we just live in it, bearing our responsibilities like an unfurled bow tie hanging louchely around our necks, draping ourselves over the microphone stand of our grievances and cradling the whisky glass of [sniiiiiiiiiiiiiip!]