ITV set aside four entire hours for the final, two-and-a-half on Saturday, one-and-a-half on Sunday. That's like five Greatest Showman soundtracks. But that's what you get when you've given Robbie Williams a contract agreeing he gets to sing half a dozen songs during his stint as a judge and then forget to schedule anything until the very last weekend. Saturday's show opens with a medley of Robbie hits, with the great man gurning alongside several rejected finalists we've tried to forget, and goes downhill from there. Only kidding. This is the real low point, Timotei gargoyle Giovanni Spano rupturing his spleen to Let Me Entertain You while Robbie sits on a throne doing that downturned mouth/nodding thing. You know the one.

But we're not here for the judges. Oh, apparently we are. Just wait till Sunday.

But we're not here for narrative reasons for the judges. Let's meet the finalists: IN THE AUTHENTIC CORNER, it's Dalton Harris, all the way from Jamaica with a voice so undeniable it cuts right through the industrial braces on his teeth. IN THE DIVA CORNER, it's pocket-rocket Scarlett Lee, whose emotional journey has increased in intensity as her eyebrows have got smaller. IN THE SCOUSE CORNER, it's Anthony Russell, an even shorter Liam Gallagher on a pogo stick. "If there was a stick of X Factor rock, it would have Anthony Russell all the way through it," declares Robbie, ensuring it would never sell. 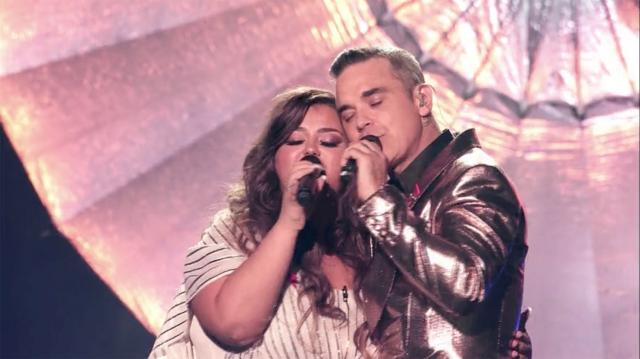 
Anthony is even more Liverpudlian than getting aggressive when someone insults Atomic Kitten, so naturally starts his bid for glory with Let It Be. He's been told to improvise, ad lib and generally leave the melody somewhere around 1969, and it's excruciating. Scarlett sings Elton John's Your Song, aiming squarely for that lucrative audience intersection where John Lewis fans and people whose lives haven't been genuinely ruined by Ewan McGregor's strained rendition in Moulin Rouge meet. Dalton tackles Donny Hathaway's A Song For You like he's an equivalent talent and pulls it off because really he's not supposed to be here, is he? He could've done this without the dread hand of Cowell steering him towards a career of Leon Jackson covers. "There's not much I can say," says Ayda Field, then says a lot more, now lost to the fast-forward button.

Genuine pop star Anne-Marie (in a floating birdcage, inevitably) and former X Factor winner/enemy of levity James Arthur then sing a duet from The Greatest Showman of course. I guess we're just lucky.

It's the prelude to a load of duets. Anthony sings with "the legend" Tom Walker (me neither), Dalton steps into Labrinth's shoes (and who can say they haven't dreamed of doing that?) to join Emeli Sandé on Beneath Your Beautiful and Scarlett draws the contractual straw – yes, it's Robbie! It's Angels! "Scarlett is real," reveals Simon Cowell afterwards, clearing up a few questions. Robbie, however, looks more and more like something else entirely, specifically Ray Liotta's Henry Hill in Goodfellas at his most psychotic. And Gary Barlow hasn't even turned up yet. 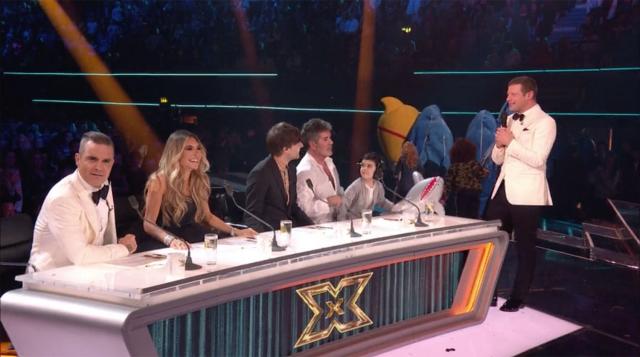 Robbie is all of us at this point.
Sunday night

It can't come back from this, surely? The last show of an inspirational series begins with The X Factor eating itself and I imagine it's still chewing. Simon "amusingly" hands over the reins of the programme – and his Syco label too, by the looks, alongside other tasty business interests, Sinitta etc – to his heir Eric who orders a performance of now-prehistoric meme-made-flesh Baby Shark, just because Simon can do this kind of stunt and no one can stop him. It's the most self-regarding thing since he last walked past a reflective surface.

Tonight's big performances are from Ellie Goulding (a homegrown star who proves you don't need The X Factor behind you, just heavy BBC support and unimaginable major label budgets), Chic ("I'm not going to pretend to mentor your stupid bands unless I get to do the Rapper's Delight rap over Good Times that was sampled for Rapper's Delight. Yeah, I confuse myself too," said Nile Rodgers a few weeks ago, probably) and Take That (we're going to need more than parentheses for this).

It's pretty emosh, really. Mark Owen quacks Shine for a bit, but the big moment comes when Robbie joins them for Everything Changes with moist eyes and a willingness to snog Mark even though the pint-sized Clementine songster has come as a beery end-of-the-pier portly cabaret MC with possibly wandering hands. That's love.

Oh, yeah, the finalists sing their "winner's song(s)" at some point, desperately trying to grab a shard of the spotlight on their own show. For Anthony, this means squeezing out I Predict A Riot alongside the insanely willing Ricky Wilson and the rest of Kaiser Chiefs; Scarlett gets to blow away Leona Lewis on her own One More Sleep, the only decent new Christmas song of the century, fight me; and Dalton sings Frankie Goes To Hollywood's The Power Of Love with Holly Joh… hang on, that's not Holly Johnson, that's James Arthur. Whu wha why oh never mind.
Does it go to DEADLOCK?

The public don't have the power to send the final to DEADLOCK. On the other hand, they do have the power to dump Anthony into third place. When Dermot O'Leary shouts his name, Liverpool's favourite novelty pencil-topper appears to think he's gone through to next week, leaping up, somersaulting and skipping away. Is BGT starting on Saturday? Maybe he'll accidentally turn up on that.

Dalton wins, but you knew that anyway. He might even make it, same with Scarlett. Ah, Scarlett. Voice of an angel, face of a tangerine, eyebrows of a Marx brother. What's not to love?
Next year