TheShiznit.co.uk presents The Rules Of Attraction: the full sordid shebang

Did I happen to mention we were putting on a screening of The Rules Of Attraction at the Prince Charles cinema in Leicester Square? I might have brought it up once or twice and covered the website in banners requesting you book tickets for six weeks or so. Anyway, the screening was last night, so today you're going to hear all about it, and tomorrow you get the even better treat of me not mentioning The Rules Of Attraction for the first time in about three months. Strap yourself in: we're delving right into Dawson's crack!


Because this site is run by three mature men, with responsibilities and mortgages and terrifying child-babies, naturally we thought the theme for the evening's entertainment should be 'bad behaviour'. So it was that Matt scoured London's Leicester Square and all nearby amenities for "sweets that look like drugs" (finally settling on Mrs Kibble's Ye Olde Sweet Shoppe) to give the Prince Charles downstairs bar a rad, totally bitching 'American college' flavour. If you didn't get that vibe from the 'ecstasy pills' (Parma Violets), 'acid drops' (lemon sweets) and, er, 'LSD tablets' (Love Hearts), then maybe the red cups clued you in. Or maybe the two berks walking around in matching Letterman jackets gave it away. Just be grateful I didn't take the stage while catching an American football, which was going to be my grand entrance. 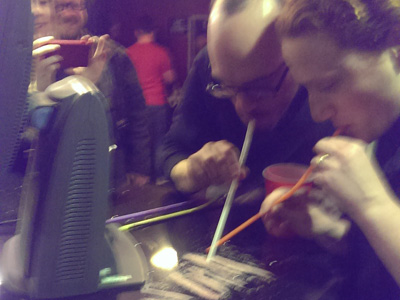 
The pre-film entertainment was short and not especially sweet, given that it was themed around your own 'college confessions': the best/worst/most disgusting things you achieved during higher education while spending taxpayer money. The tone started off low (a friend's submission got the ball rolling: "I had a wank in your shower") yet somehow managed to get lower still, until the winning confession – from a Shiznit patron who shall remain nameless – had the entire downstairs screen at the PCC recoiling in disgust. I'll just say these intriguing keywords and let you fill in the blanks: Lord Of The Rings marathon, nappies, piss. Yeah. That happened.

Each college confession was illustrated by the star of the show, one James Van Der Beek aka Sean Bateman aka Dawson. A while back, Van Der Beek realised the currency in embracing one's own meme, and reclaimed his popular 'crying' gif from Dawson's Creek by creating over 50 brand new animated gifs for use in a variety of situations. So, for every foul new confession, we had Dawson provide the reaction shot; shots like these.

With my five minutes of pre-film fame running out and the cups of piss being tossed at me from the audience my cue to "get off the fucking stage", I departed and let Roger Avary's adaptation of Bret Easton Ellis' novel speak for itself. Although I will say that had I remembered the movie opens with a particularly horrible rape scene, maybe I wouldn't have started the night with a comedy bit. WHOOPS.

To be fair, the tone in The Rules Of Attraction can't settle for longer than a single scene, bouncing from college comedy to raunchy sex flick to astoundingly grim teen drama with carefree abandon. Watching it with an audience for the first time makes these chasmic shifts in tone more apparent (during the astonishingly bleak suicide scene, someone actually yelled "FUCK!"), but you could argue that Avary rides these peaks and troughs intentionally, imitating the turbulent emotional highs and lows all teenagers (especially spoiled teenagers) experience while in the throes of youthful excess.

Made in 2002 and with Roger Avary still riding the co-writing coattails of Pulp Fiction – which, depending on who you believe, he had very little to do with – The Rules Of Attraction bears all the hallmark of a director trying to experiment with form as Tarantino had so successfully in the previous decade. This is less a film and more a series of loosely-connected bravura moments of filmmaking, the director trying to capture the nihilism and aimlessness of youth without trying to force it to fit into a teen template. 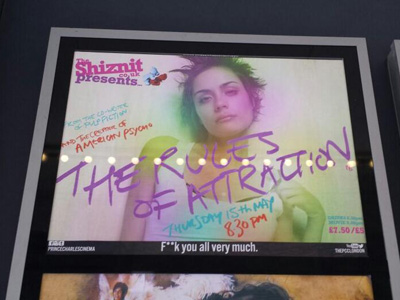 
From the opening party scene, dissected three ways (first forwards then backwards) to the dazzling montage of 'Victor's European Vacation (a high energy four-minute collage of actor Kip Pardue's real and very rude trip around Europe), Avary is seemingly only interested in pushing the boundaries of what the genre allows, even if it can come at the cost of narrative and character. Any frustration you feel with the radically erratic pacing is likely intentional on the director's part; the fact there's a fake suicide scene directly after a real one is not especially tactful, but it is bold as brass. This is a film that begins and ends in the middle of a sentence: it's the closest a film has come yet to capturing the infuriating abruptness of Bret Easton Ellis' prose, which is probably why he loves it so much.

I could continue discussing The Rules Of Attraction at length – and maybe I will one day, it's my website and you can't chuck piss at me online – but I'll leave it at that and simply say thank you to everyone who came and cheers to all who helped out on the night and spread the word. That's four screenings of four top films under our belt now – hopefully we'll see you for a fifth before the year is out. Rock and roll. (It's a thing from the film. You should have come if you wanted to get all the references).

More:  The Rules Of Attraction  Events
Follow us on Twitter @The_Shiznit for more fun features, film reviews and occasional commentary on what the best type of crisps are.
We are using Patreon to cover our hosting fees. So please consider chucking a few digital pennies our way by clicking on this link. Thanks!