TheShiznit.co.uk presents: The Rules Of Attraction

Naughty teens are in your area! That is, if you happen to be nearby The Prince Charles Cinema on Thursday 15th May, when we'll be screening the adaptation of Bret Easton Ellis' hard-edged tale of youthful excess, The Rules Of Attraction. See Dawson go dark. 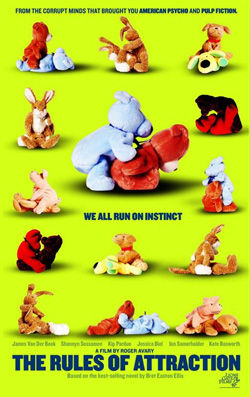 TheShiznit.co.uk Presents:
The Rules Of Attraction (18)
with 'fun' in the foyer
Thursday 15th May, Drinks: 8.30pm, Film & Fun: 9pm
The Prince Charles Cinema, Leicester Square
Order tickets now - £7.50 (£5 members)
It's been almost an entire year since we last held a screening, and judging from the gales of laughter coming from our rare showing of Arnie's True Lies, you lot enjoyed it as much as we did. Time we got back in the game. The criteria with which I select Shiznit screenings is pretty simple: it should be a film I don't see screened often or at all (The PCC's library is humungous), it should be a film that lends itself to the big screen and it should be a lot of fun. The Rules Of Attraction fulfils all this and more.

For starters, it's just about the most underrated teen movie I can think of. Directed by Roger Avary and adapted from the book by Bret Easton Ellis, it's not your typical college flick. For starters, precious few lessons are learned. Most, if not all of the characters, begin and end the movie as selfish assholes. There isn't a conventional narrative as such: it starts and ends in the middle of a sentence. But in between? A collection of comic and tragic vignettes following US college kids that are so spoiled and detached from reality, it's no surprise one of them is related to Patrick Bateman.

Hilarious and troubling in equal measure, The Rules Of Attraction leaps between tones like it's playing a game of hopscotch. Technically it's astounding - watch out for Victor's European Vacation, a high-energy montage that condenses an entire fortnight of debauchery into four minutes - but it's devastating when it needs to be. Most importantly, however, it's a showcase for the best James Van Der Beek performance ever: a role that buries Dawson in the creek, Sean Bateman is a drug-dealing, coke-snorting, gay-baiting, girl-punching, emotional vampire. James Franco couldn't do Bateman justice. Van Der Beek could. Deal with it. 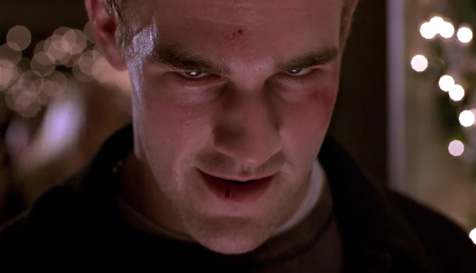 Joey wouldn't have stood a chance.


Ellis has claimed that The Rules Of Attraction is his favourite adaptation of his work, and it's not hard to see why: a less-slavish adaptation than he's used to, Rules has a swagger and a sting that really leaves a mark. It was fatally missold in the US, with a series of shit posters and trailers that made it look like a conventional teen comedy. That couldn't be further from the truth. It punches conventional teen comedies right in their stupid face. The Rules Of Attraction is the anti-teen movie: a perfect snapshot of a disillusioned, disinterested, destructive generation. It figures that young audiences ignored it in favour of The Transporter.

It's time to remedy this grievous error in the annals of teen cinema. Come and see The Rules Of Attraction with us and right this wrong. Arrive at 8.30pm for themed drinks in the downstairs bar (red cups ahoy!) with pre-film fun at 9pm and the feature shortly afterwards. Also, bonus: you get to see Dawson having a wank, wiping his bum and pissing himself. Not all at the same time, mind.

Order tickets now - £7.50 (£5 members)
More:  The Shiznit Presents  The Rules Of Attraction  Roger Avary  James Van Der Beek  Shannyn Sossamon  Ian Somerhalder  Bret Easton Ellis
Follow us on Twitter @The_Shiznit for more fun features, film reviews and occasional commentary on what the best type of crisps are.
We are using Patreon to cover our hosting fees. So please consider chucking a few digital pennies our way by clicking on this link. Thanks!