Things I have learned about Barney's Version from its poster

Oh, the fun you can have by deconstructing movie posters. Almost none. Still, this week we look at the quad for Barney's Version, starring Paul Giamatti. Sorry, that's Academy Award-nominee Paul Giamatti.

Every time awards season rolls around, films like Barney's Version seem to surface: they're not quite up to Oscar standards, but when the hell else are you going to release them? They won't make any money and they won't win any awards, so subsequently, the design agencies never seem to know exactly what to do with them. And so, our facetious journey begins: what can we learn about Barney's Version from its poster alone? 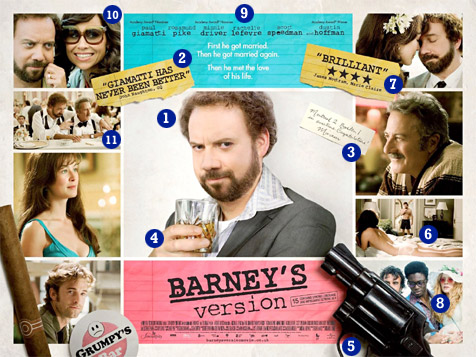 Paul Giamatti's character has a jewfro, and even though they never go out of fashion, we can assume it's a period piece. Also, he obviously couldn't be bothered to shoot a separate promo shot, so they just re-used the still in the top left, flipped it and Photoshopped out Minnie Driver chubbing his cheek. Promising.

What with all the scattered notes and typewriter fonts, it seems to be a hilarious high school comedy. I'm laughing already! It's like the inside of a teenage girl's pencil case up in here!

What's this? A note that reads: "Montreal to Boston in overtime! Congratulations, Miriam." So I guess maybe this is a road movie instead? I'm still laughing already, I'm just slightly less sure of why. It must be relevant, otherwise why would they put it on a poster? You can't put irrelevant stuff on a poster, you'd get sued.

No, wait. Whoever the hell's hand that belongs to is holding a drink and there's a cigar too. Barney's Version is obviously going to be a hip movie like Swingers or something, right? There are hipsters called Barney, I think. It's probably about the making of a mixtape. Bitches love mixtapes.

Hang on, there's a gun on it as well. That's thrown me. Maybe that means a gangster film, like, er... a sequel to Shoot 'Em Up? Guns, booze, cigars and... smiley badges? I'm getting mixed signals here, guys.

Uhh... there seems to be some gratuitous T&A dotted around the poster too. Is it some kind of sex comedy? Starring Paul Giamatti? I'm out.

Hey, if Marie Claire liked it, maybe I'm wrong. Maybe I was wrong about everything.

Let's stick to what we do know. There is at least one black guy in it. Also, the guy standing to his right can't have been very important.

Minnie Driver was nominated for an Oscar?

I don't know about you guys, but I'm picking up faint Jewish overtones. Maybe it's about the Jews. Good for them.
In conclusion, after studying its poster for four hours, I have absolutely no idea what Barney's Version is about. Let's just say three stars!

Ohhh. Now I get it. It's, um... one of those, er... (*runs*)
More:  Barneys Version  Paul Giamatti  Rosamund Pike
Follow us on Twitter @The_Shiznit for more fun features, film reviews and occasional commentary on what the best type of crisps are.
We are using Patreon to cover our hosting fees. So please consider chucking a few digital pennies our way by clicking on this link. Thanks!