Thoughts on Boyhood and fatherhood

Boyhood is a film that will say a lot of different things to a lot of different people. I became a father in 2012 and though I don't think you have to have children to appreciate it at all – it's a masterpiece – the fact I have a young son of my own meant the film connected with me in ways I wasn't expecting. Here's my take on what Boyhood meant to me.


The greatest pleasure I have ever known is watching my son grow up before my eyes; the greatest tragedy I'll know is that, try as I might, I'll never know his story in full. Don't worry, I'm not dying. There will be photographs – so many photographs – and videos and heights notched on doorframes that will mark the passage of time. But it's impossible to predict the man my boy will become, and I'll be so busy clinging to his present and attempting to stave off his future that it'll be impractical to keep looking to his past. He'll be a man before I know it and yet it seems like only yesterday he was a nebulous concept, willed into existence by my wife and I. Ferris Bueller wasn't kidding when he said that life moves pretty fast; what he couldn't grasp as an impudent young man with time on his hands is that it rarely gives you the chance to stop and look around.

What Richard Linklater's remarkable new film Boyhood does is tap into that feeling of helplessness and help consolidate the sands of time that slip through your fingers. Shot over 12 years, chronicling the life and times of Texas youngster Mason as he navigates the perils of youth, Boyhood is a quite astonishing body of work: an utterly unique and immersive cinematic experience that condenses over a decade of life into three blissful hours. It's the kind of movie you want to swim in. Watching Mason – and by extension, actor Ellar Coltrane – mature before my eyes was like a long, extended hit on some giddy drug: a wonderful high that comes close to replicating the rush I feel when I gaze dreamily upon my son and marvel at how far he's come and how far he has yet to go. 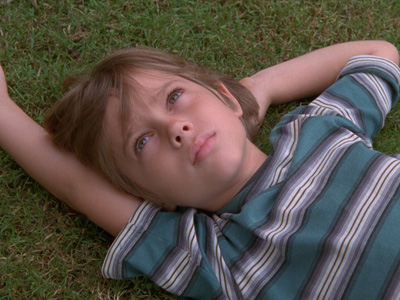 Life does not allow you the luxury of stepping back to see the bigger picture; time cannot be bent to satisfy one's own selfish desire to feed one's pride. Boyhood, however, gives you a taste of that sin. In capturing one young man's formative years on film so thoroughly and distinctively, Linklater effectively allows the viewer to play God; to indulge us in our basest instincts to skip through the pages of life to see what happens next. To stop and look around. Boyhood made me feel things I have never felt during a film: a protective paternal urge; an acute sense of my own mortality; an underlying, inexplicable ache of sadness. Most of all, however, it made me giddy with thoughts of the future my son and I will share together; images of the man he'll one day become. Not bad for a film with the same running time as Transformers 4.

Having a child has massively impacted the way I am able to watch and process films. For the most part, it has dulled my critical faculties to the point where watching a film uninterrupted by either my own sleep or my son's crying is considered a victory. Anything deemed more taxing than the likes of Non-Stop or Escape Plan goes on the pile to be watched circa 2030 when my son goes to college. Sorry, 12 Years A Slave: you're just too challenging.

Conversely, I have found that being a father has widened my emotional range considerably – or rather, it has made me an emotional wreck, capable of blubbering at even the clumsiest attempts at sentimentality. You are reading the words of a man who was genuinely brought to tears by an advert for orange squash. Had I watched Richard Curtis' About Time pre-fatherhood? No doubt I'd have written it off as emotionally manipulative, saccharine-soaked tosh. But post-fatherhood? It became a bona fide, lip-wobbling sob-fest. 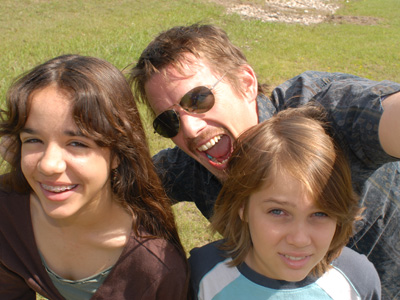 I spent 30 years building up a wall of cynicism, brick by brick, and now even the phoniest depictions of father-son bonding sneak through the cracks. Genuinely touching films, however, are capable of bringing that wall crumbling down; after Boyhood, I'm not sure I'll even bother rebuilding it – its foundations are shot.

There are dozens of moments in Boyhood – hundreds maybe – that chimed with me or sent my mind reeling with possibility. The true achievement here is that Richard Linklater does this without ever generating artificial drama. The director's focus is not the exceptional but the everyday – often the memories that linger longest are not life's great trials or tribulations but the moments in between. Judge each chapter – and that's a vague term, since Linklater uses nothing so bold as interstitials or captions – on its individual merits and you might consider them mundane, but they are small stitches in time that together make up Boyhood's rich tapestry of life.

Where Boyhood really excels is in planting ideological seeds in Mason's youth and sticking around for long enough to see them bloom in later life. It is a conceit far beyond the form of all other feature films but one that is devastatingly simple: what if we could immediately see the effects of the decisions we make? Linklater's languid, long-form shoot allows us to do just that. We see the effect Mason's rebellious father – Ethan Hawke, who back in 2002 was still a cocksure young gun – has on his upbringing. At age 8, Mason Snr has his children canvassing his neighbourhood for the Democrats (and stealing the Republican signs from their lawns); a decade later, it's little surprise that Mason is a free-thinking liberal.

Where his father is mostly absent, mother Patricia Arquette is constant even if her "poor life decisions" drag Mason and his sister from pillar to post via several abusive stepfathers. But Mason's mother's pluck is evident in his adult self; his respect for women ingrained in him from a young age. When Mason's drunken stepfather forces him to cut his shoulder-length hair into an Army style buzzcut, Mason rebels by growing it long and keeping it long. We know this because we see this. Boyhood is unique in following through with what it promises. 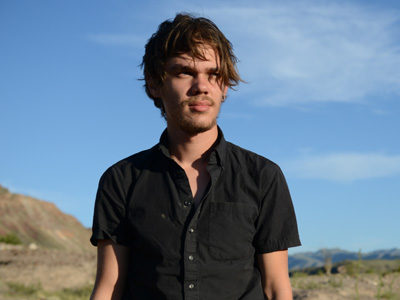 The only signifier of time – other than the alarming growth of Ellar Coltrane and the lankness of his hair – are the various cultural artefacts that litter the lives of the characters. These are pop culture moments that are not mined or exploited but merely catalogued: Britney Spears, Game Boy Colors, YouTube videos, Facebook – all preserved in cinematic amber, pristine as the day they were shot. Boyhood's funniest – and most prophetic – scene is entirely unintentional, as Mason Snr and son discuss the slim possibility of a Star Wars movie post Return Of The Jedi around a campfire ("There's just nothing after that, it's all boring, it's done now"). It's a moment so perfect that even written today it'd get a laugh, but as a snapshot of 2008, it reinforces what is so wonderful about Boyhood: it's cynicism free and 100% genuine.

When I try to imagine what my 19-month old son will be like as a boy, a teen or a young man, all I see is fog. Pontificating on his future is too abstract a concept: it doesn't compute. It is impossible for me to think of him as anything other than a baby and right now it upsets me to think of him as anything but. Yet Boyhood features so many incidental moments where the themes and dialogues and characters were so universally relatable, I couldn't help but catch a glimpse of the uncertain future that awaits my son and I. The camping trips. The Star Wars movie nights. The big talks. Boyhood holds up a mirror that surprised me with my own reflection.

Eventually, as Mason leaves puberty behind for youth and young manhood, you can feel Richard Linklater reluctant to relinquish his grasp on the film, perhaps unconsciously unwilling to let his life's work escape him. But end it must, and as Texas-born Win Butler of Arcade Fire laments the end of Boyhood with 'Suburban War', singing "This time's so strange / They built it to change / And my old friends / We were so different then" with cosmically ordained foresight, I felt that ache of sadness again: the drug had worn off.

More:  Boyhood  Richard Linklater  Ellar Coltrane  Ethan Hawke  Patricia Arquette  Serious Corner
Follow us on Twitter @The_Shiznit for more fun features, film reviews and occasional commentary on what the best type of crisps are.
We are using Patreon to cover our hosting fees. So please consider chucking a few digital pennies our way by clicking on this link. Thanks!