We really need to talk again about Transformers: The Last Knight

This year has seen the first female-led superhero movie, two Apocalypse Now inspired monkey movies, a curtain call for Logan, a launch of Universal's Dark Universe, and the return of Cars, Captain Jack, Renton and Xander Cage. And yet there's only one film I can't get out of my head right now.


As Ali details in his review, Transformers: The Last Knight truly is a logic-shattering display of bare-faced bollocks. And I have seen it twice.

This is important, because, if the first time wasn't enough of a mind-crushing frenzy of incomprehensible idiocy, let me tell you that a second viewing reallydelivers. When you already know where the 'plot' is 'going', it's even easier to spot the half-baked ideas that ultimately lead nowhere. Or have come out of nowhere. Or have no reason to exist.

Let me take you on a guided tour of my collection of stupid artefacts.
- The film starts with a Transformer giving Merlin (played by Stanley Tucci, even though he played an entirely different character in the previous film) a special staff, which somehow lets him summon a massive robot dragon. How? And where was the dragon before?

- Presumably, this is supposed to be explained in the opening narration with the line: "Magic does exist. It was found long ago on a crashed alien spaceship". I.e. “If you don’t understand anything over the next 150 minutes, just remember: it’s all magic. Transformers are magic now”.

- Megatron is in this film just enough to be namechecked every so often, but not enough to have any idea what he is doing at any given moment. In one scene, he negotiates the release of several Decepticons, in exchange for… something. These released Transformers all have unique and distinctive personalities… and are barely seen again.

- Upon seeing that Cade Yeager has an ancient Transformer talisman, junk-selling Transformer Daytrader says that it is “the first of seven signs of the apocalypse”. This - nor the other six signs - are ever mentioned again.

- Hot Rod has a slow-motion gun. A gun that fires slow motion. It's peak Michael Bay. 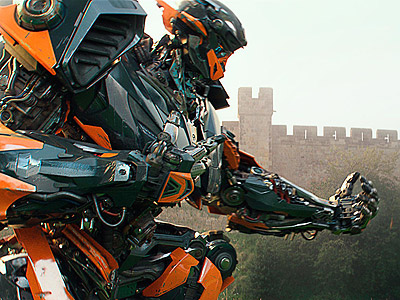 He also has a French accent, which he HATES, but is never explained.


- Anthony Hopkins spends the entire film in England, apart from in one random shot of a giant 'horn' sticking out of the ground in the middle of the desert. Anthony Hopkins is suddenly there too and reacts to the discovery. There's no way him being there fits in with the continuity of the rest of the film.

- Just FYI: Members of the secret society dedicated to keeping the existence of Transformers hidden throughout history include: Catherine The Great, William Shakespeare, Queen Elizabeth, The Wright Brothers, Churchill, Einstein, Stephen Hawking, Leonardo Da Vinci, Mozart, Tesla and Gallileo. It’s like the writers just Googled “famous people in history” and wrote down everyone who showed up in the image carousel on the search results page.

- While escaping from the Decepticons, Anthony Hopkins and his sassy robot butler Cogman race away in a fast car. During the ensuing chase, Cogman asks "By the way, Agnes called and asked if you're free tonight for a snuggle?". Two seconds later he is singing Ludacris’ "Move bitch! Get out of the way!". Two seconds later he is complaining about his massive road rage issues.

- When Anthony Hopkins leaves the submarine, Cade Yeager says: "You're not leaving us in this tin pot with this psychopath?" to which Cogman replies "I prefer the term 'sociopath'". Doe he? IS HE? Until this point, he has just been a robot with some anger issues.

- The above idea is blisteringly incoherent anyway. Case in point, when Cade Yeager complains that Cogman is getting in the way while in a submarine, the robot immediately replies "What happens in the alien ship stays in the alien ship". It’s as though a line somewhere in between this exchange got edited out. 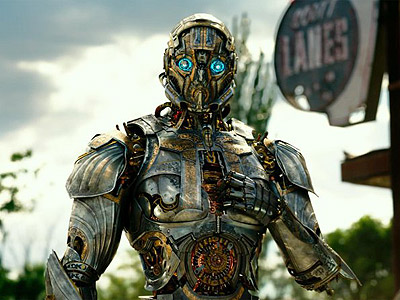 He also torpedoes himself out of the submarine in order to catch some fish for dinner because sure.


- Another example: When Laura Haddock’s posh professor asks if Cogman is coming with them to explore the alien spaceship at the bottom of the ocean, he replies “"I'm not going in that water. My cogs will be sucked through my main shaft... Now you're both on my shit list". What. Just. Happened?

- Bumblebee restores a brainwashed Optimus Prime to his normal self by speaking with his own voice – something that he has famously never been able to do in these films. There’s even a scene earlier in the film where Cade Yeager tries to repair his voice box. After this moment, he goes back to speaking in recordings again. So… has he been faking this whole time?

- Tony Hale is in this. In about three scenes, for a grand total of about three minutes. Tony fucking Hale.

- At one point, towards the end of the film, he says something like: “Personally, I prefer to rely on physics and science rather than myths and fairytales and hobgoblins.” About 20 minutes later, he says “"Well that hobgoblin shit didn't work, did it? I've got a hail mary- what about physics?" and I swear this is just a different take from the first scene.

- Side note: Autobot Hound (voiced by John Goodman) smokes a big robot cigar that must also technically still be part of him. At one point, he throws it away and replaces it with another. I can’t even begin to comprehend how stupid/expensive/wasteful/self-harmful that is.


Can you imagine what else I’ll spot when I see this film for a third time WHICH I AM DEFINITELY GOING TO DO.

More:  Transformers The Last Knight  Transformers  Michael Bay  Mark Wahlberg  Anthony Hopkins  Laura Haddock
Follow us on Twitter @The_Shiznit for more fun features, film reviews and occasional commentary on what the best type of crisps are.
We are using Patreon to cover our hosting fees. So please consider chucking a few digital pennies our way by clicking on this link. Thanks!