What I did on my holidays: watched Breaking Bad

You know how sometimes we write long, overly earnest and not-all-that-funny stuff about TV shows just because we like them a lot, and partly because we've been given free DVDs and we're total whores for that sort of thing? Yeah, well, apologies in advance. But, if we hadn't made it clear enough over the last week or so, you really should watch Breaking Bad.


Watching as much TV as I do, you get the odd epiphany from time to time, and not just the ones where it occurs to you that you should probably watch less TV and get out more. I realised something when rewatching Breaking Bad from the start this week, which was, incidentally, the best possible way I could've spent a week off work.

The main thread of season three hinges on Walt's going back to cooking meth, even though his cancer's in remission and he has all the money he needs. The first time I saw him get drawn back in by Gus's offer of $3 million for three months' work, I thought it was lazy plotting; just a shoehorned-in way of getting the story moving again. I didn't understand his motivation, when his involvement with meth had cost him his family. Why go back for more?

But the second time around I realised it wasn't the money: Walt was tempted back by the chemistry; the chance to work in Gus's custom-made lab. He's spent his life underachieving professionally and this is the first time he's been acclaimed in his field – even if anonymously – and someone's rewarding him for it. 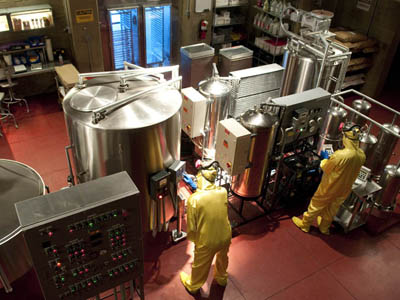 Who'd pass up the chance to work here? It's got ... nope, I can't name a single thing in this picture. Shiny stuff?

And it's this undercurrent of professional pride in Walt that drives the whole thing along. Throughout the first season in particular, people remind him constantly that he's a mild-mannered guy with no stomach for action or adventure. He's been told it all his life and he's come to accept it himself. He's a frustrated, overqualified high-school teacher who participated in research that led to a Nobel Prize for someone else, and all of his achievements have gone unrecognised. But now he's being lauded for his abilities and he can't resist that.

He likes the danger, too: he's led an unexciting life but it turns out that, when he's backed into a corner, he has the ability to think his way out of extremely dangerous problems. He even takes pride in knowing that the people who dismiss him as straight-laced would never believe how ruthless and lethal he can be.

This realisation put paid to my one nagging doubt about Breaking Bad; the one chink I'd always perceived in its narrative armour. So while I'd always thought it was awesome but with one little flaw, now I just think it's awesome.

What I like most is the relationship between Walt and Jessie: formerly teacher and pupil, it's a dynamic they revert back to time and again now they're a two-man meth factory, partners in crime. Jessie craves Walt's approval, and Walt can destroy him in a moment by telling him his work's slapdash and he's a loser. "This is very shoddy work, Pinkman!" Walt tells him at one point, on seeing a sub-par batch Jessie's cooked up, just as if he was giving him an F on a test. 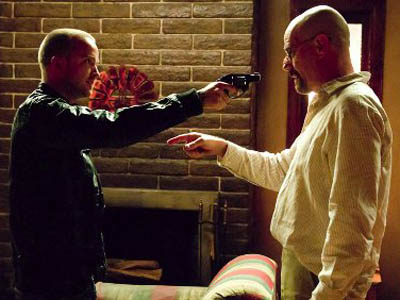 "That's not how you hold a gun. Apply yourself, Pinkman!"

They're also like a father and son, with Walt exhorting Jessie to straighten himself out, and going to great, even homicidal, lengths to protect him. On the surface of it, it's because he's his business partner and he has a stake in Jessie's health – but really it's because he's come to care about him.

In its supporting cast there's Walt's brother-in-law Hank, who spends his life kicking ass and taking names for the Drug Enforcement Administration. He's a big fish in Albuquerque but when he's sent down to El Paso, which is proper severed-head drug cartel territory, he soon finds he doesn't have the stomach for it and starts to have panic attacks at the thought of going back. You think at first that this new vulnerability is just a subplot to deepen his character a little, but it all ties up, and kicks off a chain of events that culminates in him beating up Jessie, getting suspended from the DEA and then shot by a pair of cartel-affiliated twins who want revenge for him killing their cousin. It's typical of the show's plotting: bringing back little bits that seemed insignificant at the time, but turn out to make total sense several episodes later. 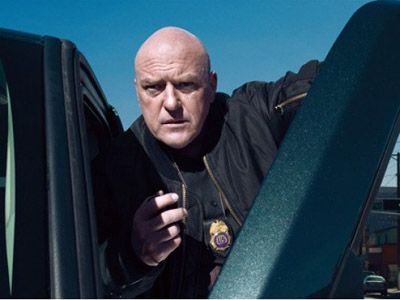 Hank: badass in the 'querque. El Pussy in El Paso.

Throughout it all you see mysterious cold openings that border on surreal: a pink teddy bear floating in a swimming pool that recurs throughout season two and isn't explained until the finale. The flashing light of Walt's smoke alarm above his bed. A full-length music video by a mariachi band about the spread of Walt and Jessie's blue meth throughout the south-west. You don't know what's going on half the time, then just when you'd forgotten about it completely, something crops up and reminds you of it.

It's been frustrating that, as a UK-based site, we haven't been able to write much about Breaking Bad up till now, when it hasn't been on TV much over here and we didn't have anything to tie a feature to. Now the first three seasons are out on DVD, we've got a proper excuse, so help us God. You might have noticed a slight outpouring about it in the last week. Just see the bloody thing, all right?

Yep, that's how I spent my holiday. What did you do? Relax on the beach in a hot country? Make social contact with other human beings? Ha! I pity you. Look what you could've been doing. Still, an invite would've been nice.

More:  Breaking Bad  Bryan Cranston  Aaron Paul  Dean Norris  AMC
Follow us on Twitter @The_Shiznit for more fun features, film reviews and occasional commentary on what the best type of crisps are.
We are using Patreon to cover our hosting fees. So please consider chucking a few digital pennies our way by clicking on this link. Thanks!