When I went to watch QI


[Please note that I didn't take the picture above, having been informed at the venue that anyone caught taking pictures would have their phone removed and factory-reset, the black market for candid pictures of Stephen Fry thriving as it does.]

It's terribly easy to sit here and harp on about the telly, but what about the experience of actually being there, seeing it filmed? Why, that'd be an insight and a half. I'd be a bit like an investigative journalist. Maybe I'd end up uncovering something huge, like some secret papers saying "I love the war and hate Afghans, let's keep it going no matter how many poor people get killed, love D. Cameron", and be pursued by shadowy henchmen out to silence me, with only an attractive yet principled female civil servant for help, and one night we'd be holed up in some hotel with documents all over the floor and we'd crack the case wide open and she'd marvel at my brilliance, and I'd lightly brush a strand of hair behind her ear and ...

(*plays out entire fantasy in head for upwards of twenty minutes*)

Shit, it was just an episode of QI. Right, anyway, you get tickets for free off some website or another, then you rock up at ITV London Studios on the South Bank and queue up for a while. At some point someone comes down the line and cuts it off, meaning everyone else doesn't get in and you get to laugh at them. Had we been among the unlucky ones I held the trump card of running a TV website with over eight hits a month, so was confident that a quick "Don't you know who I am?" would've sealed the deal in any case. 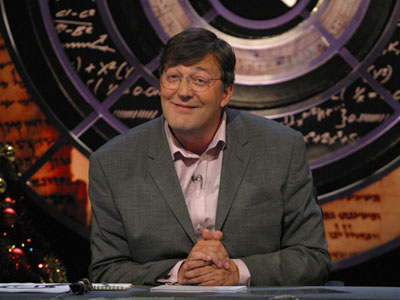 "Ah, but of course, as G.K. Chesterton often remarked, Is not a man to be known by the manner of his—"
"CUT! Do it again, be less of a cunt about it."

Once inside, you sit down on seats. Seats. As you wait for the place to fill up, various interesting facts are displayed on the monitors. Apparently 50% of the world's koalas have chlamydia. Sooner or later the floor manager comes out and entreaties you to turn off your phones and so on, before introducing Stephen Fry.

Fry these days acts as the warm-up act for QI himself, which is not to say that he does any stand-up; more just rambles amiably about stuff for a little while, then tells you an interesting word you all have to shout out so he can record it on Audioboo and Tweet it. Then he introduces the panel, and it's at this point that your luck is either in or out, because you haven't been told who's on yet. In our case it was Alan Davies, Sandi Toksvig, Jason Manford and Jeremy Clarkson. 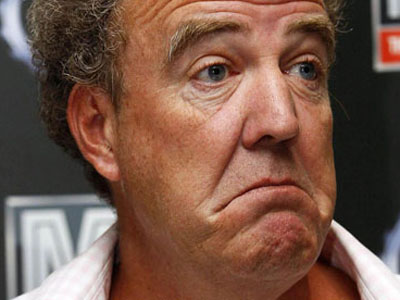 (*checks to see whether he has a book/DVD out at the moment*)
(*says something racist, watches sales rocket*)

Now, I can't stand Jeremy Clarkson. But one of the main things I can't stand about him is that he's very witty and makes a good panel-show guest, which annoys me because I end up laughing at stuff he says, which means I might as well start telling people that speed cameras should all be dismantled and being casually racist. Jason Manford I've never been a huge fan of, save for the first stand-up line I ever saw him deliver ("I know what you're thinking: 'Michael Owen's put on a bit of weight, hasn't he?'"), and Sandi Toksvig ... what is this, 1988?

But what follows is a pretty great evening's entertainment, given that it's free. What you get is more or less exactly the same show, only it lasts two hours. Surprisingly, there aren't any breaks: none of the panellists stops and asks to deliver an answer again; other than Fry redoing a couple of links to camera at the end, it just runs all the way through.

And, as ever, you get good examples of why QI is one of the few long-running panel shows that shouldn't have been axed years ago, which is that you always find out genuinely fascinating stuff. Like the fact that the bottom of an extended Slinky, when dropped, will stay absolutely still in mid-air until the top hits it.

Come on, that's at least quite interesting.

After two hours of it you're very ready to go by the time it comes to a close, but you've breathed the same air as some real-life celebrities, you've had a few laughs and you've maybe even learned a couple of things that you can pretend you knew legitimately for weeks before it goes out on TV. Plus there might be a glimpse of you when it's repeated on Dave for years to come.

In the spirit of Dave I'll be copying and pasting this article and reusing it in a month's time. And the irony is, you'll read it because there's nothing else on.

More:  QI  Stephen Fry  Alan Davies  Jeremy Clarkson  BBC
Follow us on Twitter @The_Shiznit for more fun features, film reviews and occasional commentary on what the best type of crisps are.
We are using Patreon to cover our hosting fees. So please consider chucking a few digital pennies our way by clicking on this link. Thanks!