WIN the chance to watch Homeland at the Imperial War Museum

That's right, I put WIN in capital letters because you can literally WIN a thing here. It does involve leaving the house, though. I realise this goes against everything we stand for, but stick with it.


I went to the Imperial War Museum in That London a few weeks ago. Though I thoroughly enjoyed kicking the tyres on the tanks, and found the Holocaust exhibition about as gut-wrenching an experience as a museum can deliver, the thought occurred to me that the whole day would've been greatly enhanced if only I'd been able to watch TV at the same time.

And now ... now I CAN. Well, I can't, obviously, because we're running this competition, and it would be ethically questionable to award the prize to myself, but you, yes, you can now watch TV at the Imperial War Museum. Specifically, you and a friend can go to a special screening of the brilliant Homeland in September.

What's Homeland? Well, let me explain by way of a paragraph the PRs sent me and I pasted in. See if you can spot the join.

Redefining the word gripping, Homeland is the exhilarating and frank drama that follows fervent but unbalanced CIA officer Carrie Mathison (Claire Danes, Stardust, Terminator 3) returning from an unauthorised operation in Iraq. Back on home soil, she is assigned to a counter-terrorism unit after she has been warned that an American prisoner has been turned by Al-Qaeda. Discounted by her superiors, Carrie is left unheard when US Marine sergeant Nicholas Brody (Damian Lewis, Dreamcatcher, TV’s Band Of Brothers) is rescued from a terrorist safe house, having been missing in action since 2003… 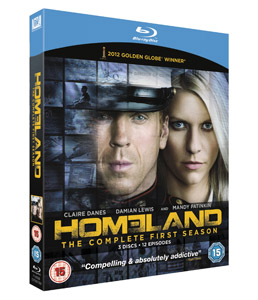 The screening is to celebrate Homeland season one's release on Blu-ray and DVD on 10 September, and includes the first episode and the unseen "bridging episode" from the DVD/Blu-ray extras. It's on Friday 7 September, and doors open at 6.15pm for refreshments for a 7pm start.

For your chance to be there, just click here and answer the question. Anyone who's entered one of our competitions before will infer from the fact that the question is harder than "How many feet do you have?" that we didn't write it ourselves this time, but hey, do a little research. Plug your laptop into a big screen in a dimly-lit room and Google the answer while getting a friend to shout "Get me everything we know on Brody!" if you want to fully replicate the CIA experience.

You can pre-order your copy of Homeland now. To find out more, visit the UK Facebook page.
More:  Homeland  Damian Lewis  Showtime  Channel 4  Competition
Follow us on Twitter @The_Shiznit for more fun features, film reviews and occasional commentary on what the best type of crisps are.
We are using Patreon to cover our hosting fees. So please consider chucking a few digital pennies our way by clicking on this link. Thanks!