An exhaustive knowledge of film and the history of cinema doesn’t start and end with being able to name the Magnificent Seven, y’know. You Ain’t Seen Me, Right? is the weekly feature that reveals there are also some black and white films that exist too.

You Ain't Seen Me, Right? is brought to you by Daniel Palmer, of Part-Time Infidel web fame. He’s the only person capable of narrating Morgan Freeman’s life story. 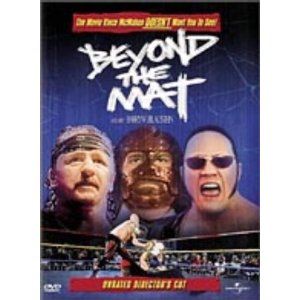 People often sneer and turn their noses up at professional wrestling, dismissing it as little more than a macho pantomime where burly men in tights pretend to fight each other. But to do so is to overlook the myriad complexities that go into the performance - a marriage of sport and theatre that presents elemental morality plays. Pro wrestling is as pure an American artform as Jazz or comic books, which has gone through manifold mutations since the 1860s: from sideshow attraction to legitimate sport to the billion-dollar industry it is today.

Screenwriter and closet wrestling fan Barry Blaustein set out to challenge his own preconceptions and shatter the myths that surround this vibrant and often bewildering subculture; genuinely trying to get to the heart of its enduring appeal and ask what motivates those who enter it. Blaustein embarks on an odyssey that encompasses every level of the business, encountering a variety of colourful characters that drive home the fact there is no such thing as a stereotypical pro wrestler.

Blaustein visits the ‘sports entertainment’ juggernaut that is the World Wrestling Federation (WWF); the fledgling Extreme Championship Wrestling (ECW) - an ultra-violent, weapons-heavy Philadelphia promotion preparing for its first pay-per-view, headlined by ‘the Hardcore Legend’ Terry Funk; and All Pro Wrestling (APW) , a small California outfit that doubles as a training school. These operations are run by three very different men: the WWF’s Vince McMahon is equal parts carny and CEO, a man trapped between the fairground and the boardroom; ECW’s Paul Heyman is a garrulous hustler with a gift for inspiring unquestioning loyalty; and APW’s Roland Alexander is your archetypical sleazy small-time promoter, whose motto is ‘you don’t pay, you don’t play’. 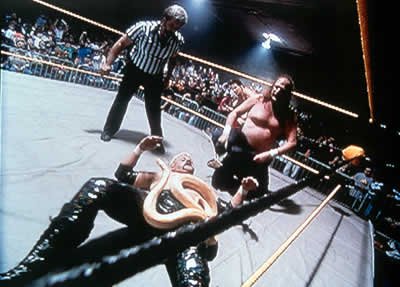 Of course this is a legal move. Show me in the rulebook where it says ‘snakes aren’t allowed’.

But the crux of the film’s success is its unfettered access to the wrestlers out of character, showing that while the action in the ring is pre-determined, the consequences are all too real. Mick Foley and Terry Funk took wrestling to new levels of violence with their ‘death matches’ against each other, but in reality they are firm friends bonded by their bloodshed. Contrary to the demented characters they portray, Foley and Funk are funny, articulate and genuinely likeable, attentive parents and husbands; which makes the punishment they inflict on their bodies all the more puzzling and troubling - seeing their loved ones respond to their crazy stunts is particularly upsetting.

Jake ‘The Snake’ Roberts is the real-life Randy ‘The Ram’ Robinson; one of the biggest stars of the ‘80s, Roberts is now a crack addict haunted by his relationship with his daughter and his troubled upbringing. Roberts is a victim of a business where, in his words, ‘drugs are a necessity’; the scenes with his daughter are unbearably tense and clearly influenced those in The Wrestler (2008). Dennis Stamp provides some levity: he has had eight thousand matches, none of them main events, and must stay in shape - despite the fact he hasn’t had a match in eight years - because ‘you never know when the phone will ring’. Elsewhere, there is a former bounty hunter with four justifiable homicides to his name, an ex third-grade teacher, a UN scholar and a serving governor.

That Vince McMahon tried to prevent Beyond the Mat from seeing the light of day is a testament to its searing honesty, peeking behind the curtain to offer an unprecedented glimpse into the workings of this absurd, larger-than-life business. As Blaustein confesses, ‘I don’t know why I love it, I just do’.
After reading this, I immediately wanted to Ric Flair somebody by slapping them across the chest while shouting Wooooooooo! Anyway, more from You Ain't Seen Me, Right? next week.