You made Avatar a success, now quit complaining about the sequels

Is there a word used on social media and comment threads more cringeworthy than "Avatards"? Not only is it not remotely funny, it's usually accompanied by a lazy, sneering dismissal of James Cameron's Avatar sequels, or more specifically, the rapidly increasing volume of them. I admit, I am fascinated by the highs and lows of the Avatar franchise, the record-breaking box office haul and the subsequent disappearing act from the nation's consciousness (this article from Forbes, on Avatar's lack of "pop-culture footprint", is sadly accurate). But have we really become so jaded and so short-sighted that we're dismissing out of hand sequels to the most popular movie of all time; a movie that, just seven years ago, we ALL paid money hand over fist to go and see? You and I are both complicit: we all were Avatards and we will be again (and again, and again, and finally once more in 2023).


I get it. Avatar is the biggest, easiest target there is: a gigantic big blue bullseye with stupid hair and its arse hanging out. I will defend the movie's visuals to the hilt but when it comes to a defence of the movie's dialogue, I will yell HEY LOOK OVER THERE and when you turn back around I will still be standing here but I'll have my headphones in and will pretend I thought our conversation was over. Avatar is, essentially, a bigger, sexier, 3Dier Legend Of Ferngully. Smurfs in space. Pocahontas on Pandora. I've heard them all, and they're all HILARIOUS, well done.

At some point after Avatar's coronation as the most successful movie of all time - and with even the new Star Wars movie falling $700m short of its $2.7 billion total, I think I can say with confidence that it'll hold that title for the rest of my lifetime - the public turned on it. It became fashionable to hate it. Somehow it became a punchline. Exactly like with The Phantom Menace and Indiana Jones And The Kingdom Of The Crystal Skull, a fun yet deeply flawed movie is enjoyed by many before a groupthink consensus is reached and it is retroactively decided that actually, it was shit, wasn't it? So shit that even four months after its cinematic release, its shit DVD came out and sold a record 6.7 million shit copies in the US alone. What a load of shit, right guys? Hahaha, 'Avatards'. Classic!

No, it wasn't shit. You enjoyed Avatar, even if just a little bit. Even if just for that first 3D shot of the bead of water on the lens. Even if just for that first giddy trip into the body of a Na'vi. Even if just for that beautiful grace note when former paraplegic Jake Sully takes his new body for a run and scrunches his toes satisfyingly in the dirt. Even if just for the vertiginous scenes in the Hallelujah mountains, or the bit with the fireflies, or the bit with the Viperwolf attack or the quite frankly fucking magnificent sequence where Stephen Lang's tar-chewing panto villain performs an emergency landing in his mech suit while his ship crash lands in a ball of flames behind him. Avatar was a movie you experienced in the moment; Pandora was never going to feel half as fresh in the memory. This was a movie so intoxicating that a helpline was set up for people suffering with Pandora comedown. 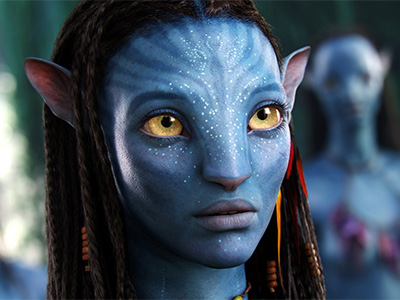 
The film continues to exist in its 2009 bubble, and love it or hate it that's fine with me. But can people really be so dumb as to underestimate James Cameron again? This is a man who gets his rocks off turning movies into money. He feeds on your projected disappointment and it only makes him stronger. He did it with Titanic, he did it with Avatar and he'll do it again with Avatars 2, 3, 4 and 5. That feels like a lot of movies, right? Four sequels! In comparison, Marvel will probably have released seven more movies before the first Avatar movie arrives, and I don't hear anyone complaining about all those bloody new Star Wars movies they keep churning out, cuh, what a liberty, chiz chiz etc.

The most common complaint regarding Avatar's place in the pantheon of cinematic blockbusters is that it is forgettable, which I disagree with but understand. An infamous tweet from earlier this year challenged us to name a single character or line of dialogue, and it really struck a nerve. Well guess what boners, that nerve belonged to James Cameron, and it's almost precisely the reason you're getting five Avatar movies instead of four (or three, or two). Speaking at CinemaCon, James Cameron allegedly said:

"
"
"Someone showed me this tweet by this woman, Dana something... Dana Smith? And it was, and I'm paraphrasing here, but basically something along the lines of see how many of you can name one character or one line of dialogue from Avatar. And the implication was that nobody could, because the film, despite making a lot of money, didn't make a huge impression on people.

"So I got my team together and showed them this tweet and said, you know, what do we do about this? And we came up with a lot of ideas, just kinda put everything on the table. But the one thing we kept returning to was making four Avatar sequels instead of the one that we were planning.

The idea being that if we had five Avatar sequels spanning, you know, two decades or whatever, and people were just constantly being bombarded with Avatar from every direction, something would have to stick. So really, it all started with a tweet. Which is kind of amazing when you think about it."
I can't support this line of thinking, personally, because I think generally giving the people what they want, or what they are perceived to crave, is a bad idea because people are stupid. You can't name a single character from Avatar? Here, have literally a hundred characters for the next seven years of your life, watching you from bus stops, staring at you from your cereal packets, peering at you from the lunch boxes of the children you haven't even conceived yet. You don't remember Avatar? CHOKE on Avatar you sons of bitches.

[Edit: So it turns out the above quote is a fake, apologies for that. It was reported in good faith. Also it backed up my argument so I was like, YES PLEASE. Still. The rest of the article still stands. I reckon. - Ali]

Avatar's perceived lack of cultural footprint is exactly what endears me to it: I haven't had a chance to be sick of it. I assumed this was James Cameron's plan all along: starve the dogs then feed them four steak dinners. People bitch about Avatar being forgettable but only because Cameron - I'm sure defying the wishes of Fox - refused to flood the market with watered down insta-sequels, animated TV shows, spin-offs, comic-books and videogames. (The Avatar theme park, due to open at Walt Disney World Resort in 2017, is the one exception, although opening eight years after the film's release is almost heroically brave/stupid). For a director who wields such bleeding edge technology, James Cameron's approach with the Avatar universe was refreshingly old fashioned: leave us wanting more. 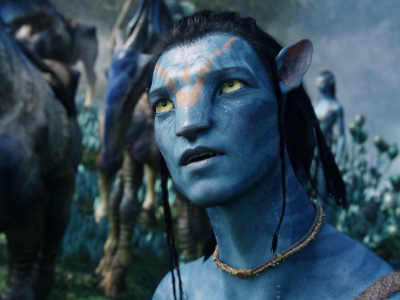 And he wrote it in such a way that he doesn't even have to cast Sam Worthington again.


Sadly, that's not a thing any more. We want more, yes, but we want it NOW. We literally want the next movie teased before the movie we're currently watching has even finished. We have to wait nine years for an Avatar sequel? Fuck you James Cameron for making us think about our own mortality. We have become a generation of needy, eternally unsatisfied, chronic complainers, who don't know what we want, except that whatever it is, we want it yesterday. We whinge about new Star Wars movies. We whinge about two competing comic-book universes. We whinge about Harrison Ford returning to play Indiana Jones. Presumably every single one of you who have whinged about the Avatar sequels will be boycotting them, without seeing a single second of footage, turning your nose up on the basis of an announcement and a logo? Of course. If there's one thing internet nerds are, it's principled.

Here's the thing: the Avatar sequels are going to be fantastic at best, or at worst, fun but flawed - the only thing that can be relied on is that all of us will buy into the hype and go and see them. My prediction? Cameron will embrace VR technology in a groundbreaking way. Remember why it took him so long to release Avatar in the first place? He was waiting for the tech to catch up to his vision. With the likes of the Oculus Rift and competing systems on the horizon, you'd be a fool to bet against Cameron strapping us into headsets and dropping us right into the thick of the Pandoran jungle.

Even back in 2009, people claimed they felt disillusioned when they took off their rudimentary 3D glasses; imagine the effect ten years on, with 360 degree vision and total and utter envelopment, the thin line separating audience and screen removed entirely. That's exactly the kind of forward thinking that'll have Avatards like you and I lining up round the block.

More:  Avatar  James Cameron  Sequels  Whinging  Man-babies  Avatar 2  Avatar 3  Avatar 4  Avatar 5
Follow us on Twitter @The_Shiznit for more fun features, film reviews and occasional commentary on what the best type of crisps are.
We are using Patreon to cover our hosting fees. So please consider chucking a few digital pennies our way by clicking on this link. Thanks!