The First Avenger is certainly shaping up: Captain America now has a star, a director, a name change, a re-write and a female lead. Rushing everything at the last minute? It's the American way!

This time last month, Marvel fans were wetting their spandex over The First Avenger: Captain America, which still had no cast despite the fact it's due for release in early 2011. Today, the movie has a lead in Chris Evans, a director in Joe Johnston and, as of this morning, a female lead in the shape of British actress Hayley Atwell. More like Hayley Act-well, right guys? (*high-fives self*)

Atwell, who you didn't see in Brideshead Revisited or The Duchess because you were too busy playing with your action figures, will play Peggy Carter, Cap's WWII-era love interest. The pair bond over their love of killing Nazis and their agreement that America won the war single-handedly. 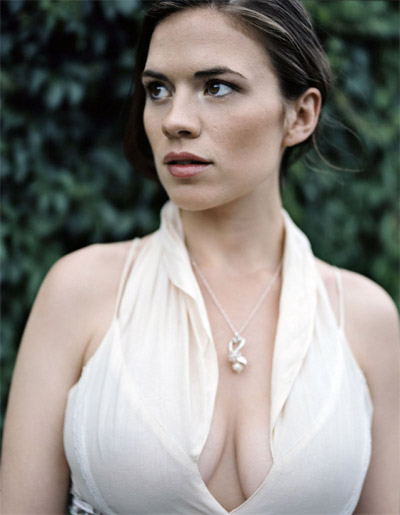 Someone else likely to be getting sleepless nights is Joss Whedon, who is expected to sign on for The Avengers any day now. Presumably part of Whedon's contract allows him to stamp his greasy fingerprints on the individual Avenger movies too, because various reports claim he's re-writing Zak Penn's Avengers script, plus the Captain America script too. Gotta work in a Nathan Fillion cameo somehow, I guess.

Wait a minute... Nathan Fillion? Captain America? How perfect is that? Instead we have to make do with the Human Torch in a leotard.

More:  Captain America  Hayley Atwell  Joss Whedon
Follow us on Twitter @The_Shiznit for more fun features, film reviews and occasional commentary on what the best type of crisps are.
We are using Patreon to cover our hosting fees. So please consider chucking a few digital pennies our way by clicking on this link. Thanks!