I went to the Fortitude premiere and they gave me a free bagel and the fake snow got stuck to my shoes and Christopher Eccleston had evidently really tied one on by the time they got round to the Q&A.


Good on him, though. It wasn't like he was a stumbling wreck. He was at that stage of drunkenness where you're perfectly chatty and lucid, but don't quite know how to sit comfortably so keep on shifting around.

About one glass of wine away from the stage where you come up with a truly world-beating conversational point about something but forget it after you've started speaking, and about three short of the point at which you're on the train and convince yourself that as long as you sit perfectly still in one position you'll be fine, but any deviation from this stance will bring disaster.

Here, you'll note, he is focusing on Edith Bowman only superficially. 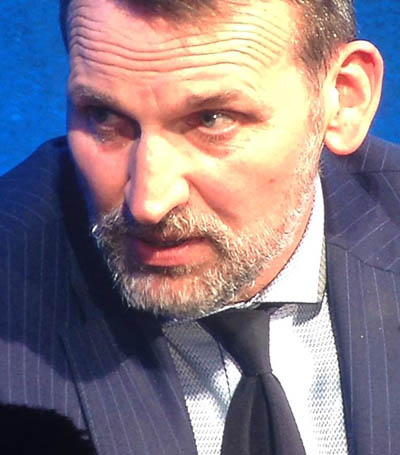 Thanks to Kasia Delgado for this picture. The rest, ie the ones that are terrible, are mine.


Shortly after, he will lean back in his chair exaggeratedly, quickly realise it's not for him, then cup his chin in his palm, put his elbow on the chair arm and lean a bit too far over it. 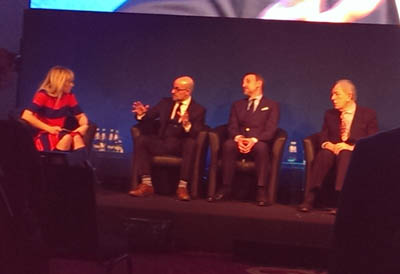 Next, he has a decent crack at crossing his legs before thinking better of it. 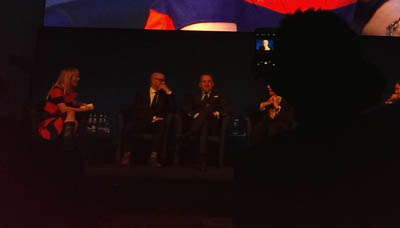 While above him, we see chilling evidence that Michael Gambon, who of course perished in the fire she started 40 years ago tonight, has returned to haunt Edith Bowman. 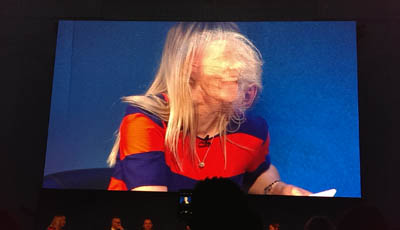 Later at home she will be wakened from her sleep and while she's not looking a doll will twist its head around to look at her, all creepy like, then she'll go out into the corridor and there'll be ghostly children there who will silently put their finger to their lips and go "Shush" and then she'll look at the wall and there'll be a crude scratched mural on it of her in a burning house looking all pointy. I'm filling in the blanks myself on a lot of this in honesty but it's a reasonable assumption.

A bit later he tries sitting forward, which makes for a shorter grab distance to the glass of red wine on the floor but doesn't last long. 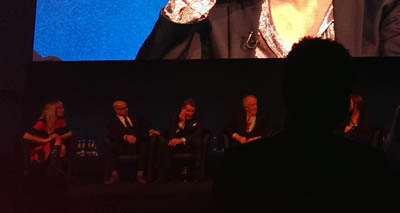 Then as Sofie Gråbøl speaks, he puts his hand to his mouth amid fears it's all about to go terribly wrong. Stanley Tucci leans back in alarm. (Obviously this is wildly misrepresentative but no more so than paparazzi taking pictures of famous women blinking and using it as evidence that they're drunk. Which is fine.) 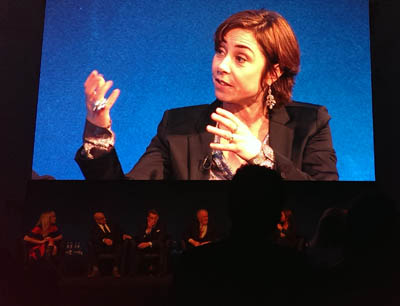 Finally, after the Q&A is wrapped up, he stops Stanley Tucci on their way off the stage and engages him in a conversation about Tucci's shoes which goes on for an uncomfortably long time. 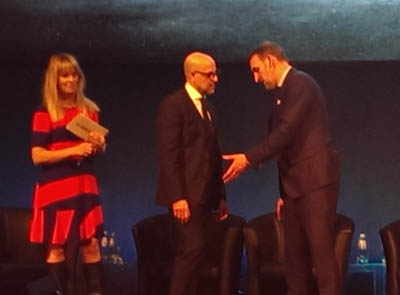 We are invited to a drinks reception in the hotel function room downstairs, but I go home instead, because Eccleston is plainly mortal by this point and in all likelihood is going to start a fight with someone about whether or not they nicked his quid off the pool table.

(Fortitude is quite good. See the Q&A highlights, including a slightly slurred first answer from Eccleston, and a trailer here.)

More:  Fortitude  Christopher Eccleston  Stanley Tucci  Michael Gambon  Sofie Grabol  Edith Bowman  Sky Atlantic
Follow us on Twitter @The_Shiznit for more fun features, film reviews and occasional commentary on what the best type of crisps are.
We are using Patreon to cover our hosting fees. So please consider chucking a few digital pennies our way by clicking on this link. Thanks!