As if you cared, we have the first official still of the remake of The Karate Kid, aka Dayum: Jackie Chan Done Got Old!

Try and remake Jaws or Star Wars or Fight Club and I'll beat the living piss out of you; try and remake some piece of shit eighties movie like The Karate Kid and I'll meh so hard all of Generation Y will hear my shrug over my Twitter feed. This is really a lose-lose situation for you, Hollywood.

Nonetheless, despite my sackloads of threatening letters, the remake trend continues with this new take on The Karate Kid, starring Jaden Smith and Jackie Chan as Mr. Miy- uh, Mr. Han. That justifies a remake, right? Directed by the dude who farted Pink Panther 2, it relocates the story to China and sees Will Smith's kid rightly being bullied for being in a shitty remake.

Anyway, People Magazine were the lucky buggers who got the exclusive on the first official photo, which shows Chan's wizened old crone hanging on a bus looking like he smells like a hobo's crotch. This movie already looks like I imagine it'll stink. 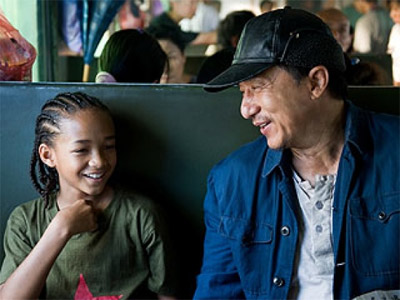 "You no Chris Tucker, but you do as comic foil" (*gurns*)
More:  The Karate Kid  Jackie Chan  Jaden Smith  Remakes
Follow us on Twitter @The_Shiznit for more fun features, film reviews and occasional commentary on what the best type of crisps are.
We are using Patreon to cover our hosting fees. So please consider chucking a few digital pennies our way by clicking on this link. Thanks!