It's time to raise the curtain on 'The Muppets'

It may be a miserable night in the UK, but this first glimpse of Jason Segel and James Bobin's The Muppets movie should bring a smile to your face, and put some warmth in your black heart.

Ahh, The Muppets. Loved by adults and children alike - mostly for the same reasons too, none of that jokes-only-adults-get nonsense. Most of the time they can do no wrong, but I can't help feeling that the last few feature-length outings have been a bit stale. So it's good to see the old guard making way for some of the younger names on the scene: namely James Bobin (The Flight of the Conchords), and Jason Segel (I Love You, Man). Bobin directs, whilst Segel writes and stars as Gary. Here's the first official look, courtesy of Entertainment Weekly: 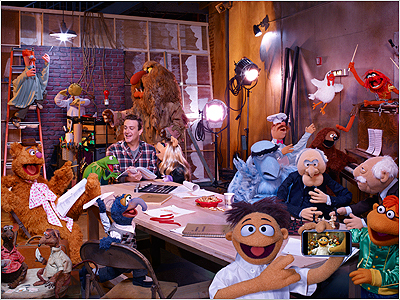 You're probably wondering who that new muppet is at the front. The one with the smartphone who looks hastily Photoshopped in. That's Walter, and worryingly he appears to be some kind of hipster with issues and stuff. According to Bobin:

"
"
"Walter is the kind of guy who faints when he sees Kermit...has a little bit of a self-confidence issue because he's the only person like him that he's seen aside from the Muppets...His dream is to meet the Muppets and be around people who are like him."
Hmm, not so sure about that but I'll reserve judgement until the first trailers arrive. If Walter really does want to live with his own kind, then he's made a pretty good start - Segel is probably the closest a human has ever come to being an actual Muppet. I bet he has to constantly stop puppeteers trying to wear him on their hands.

More:  The Muppets  James Bobin  Jason Segel
Follow us on Twitter @The_Shiznit for more fun features, film reviews and occasional commentary on what the best type of crisps are.
We are using Patreon to cover our hosting fees. So please consider chucking a few digital pennies our way by clicking on this link. Thanks!