Let The Right One In remake cast

Cloverfield director Matt Reeves is moving forward with Let Me In, his remake of Swedish vampire epic Let The Right One In, and has found his young cast - who I guessed without even reading the article.

As much as you, I and everyone loved Let The Right One In, a Hollywood remake was always on the cards. The arrival of Let Me In, though, came as quite a shock, given that it was announced before the original had even arrived in UK cinemas.

Directed by JJ Abrams' bitch Matt Reeves - he of 'not getting any credit for Cloverfield' non-fame - Let Me In transports the story of an outcast boy who befriends a neighbourhood vampire from Stockholm to the States.

Oscar is now Owen and will be played by kid du jour Kodi Smit-McPhee, who starred as the young Logan in Wolverine and will play the Son in the forthcoming apocalepic The Road.

(His is a name that's attached to every available role under ten years old; it's also a name that makes me want to punch the face attached to it. Kodi - for when the name 'Cody' just isn't douchey enough.)

Eli is now Abby, and will be played by Chloe Moretz, who was the sassy little sister in the otherwise outstanding (500) Days Of Summer and is soon to drop jaws as the c-word-uttering Hit Girl in Matthew Vaughn's Kick-Ass.

The role of Eli/Abby's caretaker has gone to Richard Jenkins, a solid choice after his Oscar-nominated turn in The Visitor. Truth be told, it sounds like a pretty fine cast has been assembled thus far.

Let Me In will come knocking at your window in January next year; fans of Swedish vampire fiction should ready their placards and pitchforks. 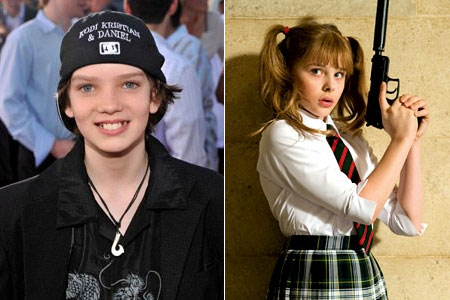 This has all the makings of a stomach-churning and unnecessarily brutal romance.
More:  Let Me In  Let The Right One In  Kodi Smit-McPhee  Chloe Moretz
Follow us on Twitter @The_Shiznit for more fun features, film reviews and occasional commentary on what the best type of crisps are.
We are using Patreon to cover our hosting fees. So please consider chucking a few digital pennies our way by clicking on this link. Thanks!