Marky Mark to star in Uncharted

Let's face it, guys: Nathan Fillion never really had a shot. Despite the fact he shares a name and a face with Uncharted's lead character Nathan Drake, the Firefly nerd magnet was never going to sell a videogame movie to the masses. To do that, you need an established Hollywood toehead on the poster - someone like, say, Mark Wahlberg. All signs point to Uncharted 'covering new ground'! Poster quote! 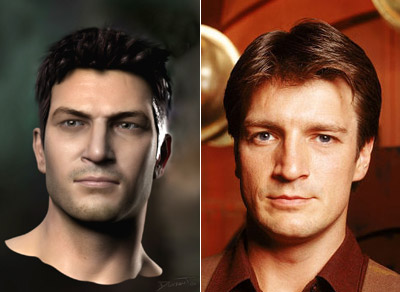 Ugh. I'm no Wahlberg hater (I'd like nothing more than his character from The Departed to be my life coach) but he's an ill fit for Uncharted's intrepid explorer. If you've played the games - you are all thirtysomething males, right? - then you'll know that Nathan Drake is a wisecracking doofus with a neat line in self-deprecation. Mark Wahlberg tried to crack a one-liner once but he accidentally punched the guy in the face.

Still, the forthcoming Uncharted movie's pedigree is more esteemed than most, with David O Russell on directorial duty, now reunited with Wahlberg, who he worked with first on Three Kings and then again on I Heart Huckabees and The Fighter (which I'm off to see tomorrow). These are some of Wahlberg's better films, so you can't say Russell doesn't know how to get the best out of him.

Oh yeah, and get this: the studio are pursuing Robert De Niro and Joe Pesci for Nathan Drake's father and uncle respectively. Yes, that is a Goodfellas reunion. And yes, that is a repeat of the Raging Bull brotherly dynamic. And no, this isn't nearly as exciting as it would be if I reported it ten years ago. In the meantime, we have to watch De Niro get stabbed in the cock in Little Fockers, which is so obviously a metaphor for my excitement, I might as well get my coat and leave.

More:  Uncharted  Nathan Drake  Mark Wahlberg  Nathan Fillion  David O Russell
Follow us on Twitter @The_Shiznit for more fun features, film reviews and occasional commentary on what the best type of crisps are.
We are using Patreon to cover our hosting fees. So please consider chucking a few digital pennies our way by clicking on this link. Thanks!