Michael Bay has officially picked up the crayons and begun work on Transformers 3. According to his blog post, he's flown to Rhode Island for a business meeting with Hasbro. I imagine by 'business meeting', he means 'playing with their awesome new toys'. The script will be 'written' by Ehren Kruger, who wrote Transformers: Revenge Of The Fallen and Reindeer Games. And Scream 3. See how deep he is.

Transformers 3, as yet without an unnecessary subtitle, will be released in the US on 1 July, 2011. If calendars went that far into the future, we'd suggest you mark the date as one to remember, or least one to not release your movie on if you're a producer.

Bay, ever the sensitive soul, took the announcement as another opportunity to flirt awkwardly with star Megan Fox, who will also return:

"
"
Megan Fox, welcome back. I promise no alien robots will harm you in any way during the production of this motion picture.

Please consult your Physician when working under my direction because some side effects can occur, such as mild dizziness, intense nausea, suicidal tendencies, depression, minor chest hair growth, random internal hemorrhaging and inability to sleep. As some directors may be hazardous to your health, consult your Doctor to determine if this is right for you.
Ugh. There's literally nothing more cringeworthy than being witness to a middle-aged man engaging in obvious flirtation with a hot younger woman.

I'm assuming by now you are all aware of the audition tape he made? It's such a creepy (yet awesome) story that 'washing Michael Bay's ferrari' is now my preferred euphemism for oral sex. 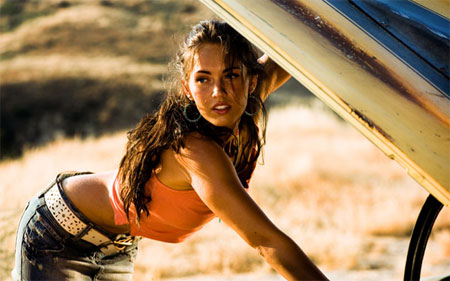 Yeah, that's right. Get in there nice and deep.
More:  Transformers  Transformers 3  Michael Bay  Megan Fox
Follow us on Twitter @The_Shiznit for more fun features, film reviews and occasional commentary on what the best type of crisps are.
We are using Patreon to cover our hosting fees. So please consider chucking a few digital pennies our way by clicking on this link. Thanks!