It's almost as if making a film for $300 that then goes on to make $5 gajillion makes good business sense?

Oren Peli, the tropical-juice-sounding director of the original and producer of the second has announced that we, or US audiences at least, can expect to see the film hit cinemas with uncanny Halloween timing on 21 October 2011, which leaves just enough time for him to set his camcorder up and film himself reading the paper over the next few months, before spending a day running away from loud noises. You've seen these films, right?

And I guess that's the real question: where can the story go next? While the sequel failed to live up to the hype and the success, but mainly the hype, of the first film, it did at least do a brilliant job of interweaving with the original's plot and enhancing the background of the story.

I suppose there's still a mysterious family past about which we have yet to know the full details, but then we can't delve too far back into historical events - not unless Peli finds a way to present the film as a series of stills taken from an old plate camera.

Although Peli could decide to completely change the genre and make it a classic whodunnit instead? 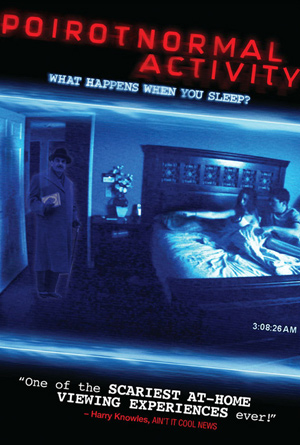 Taken from Empire's always fun Movie mash-ups
More:  Paranormal Activity  Oren Peli
Follow us on Twitter @The_Shiznit for more fun features, film reviews and occasional commentary on what the best type of crisps are.
We are using Patreon to cover our hosting fees. So please consider chucking a few digital pennies our way by clicking on this link. Thanks!