Southpaw ad saved by last-minute reference to other boxing movie

Upcoming Jake Gyllenhaal film Southpaw has been saved from obscurity at the eleventh hour by a journalist's agreement to be quoted comparing it to another boxing movie.


Audiences were left confused by a test promotional campaign, which failed to make mention of any other boxing film, or even describe any element of Southpaw as "a knockout".

The pilot campaign of posters, bus adverts and brief TV spots during Top Gear repeats on Dave was met with widespread criticism.

"It leaves me with no frame of reference," said commuter Hatch Figgis. "As everyone knows, it goes Rocky I, II, Balboa and IV, Warrior, Raging Bull, Rockys III and V, then actually punching yourself, then The Fighter.

"If I'm not informed in advance where I can expect to slot in Southpaw then I'm afraid I simply cannot anticipate what it might involve. And therefore I am not in a position to pay good money to see it."

Others were left feeling "frightened and alone" by the campaign's failure to liken Southpaw to a combination of two or more boxing films.

"Warrior was 'All the Rockys Rolled into One'," explained Metro reader Buzz Stanks. "The Fighter was 'The Boxer Meets The Hurricane'. Grudge Match was 'Million Dollar Baby Meets That Bit in The Man with the Golden Gun Where He Goes to the Kickboxing and the Girl's Dead and the Little Fella's Behind Him with the Peanuts'. You knew where you were. But I want no part of this whole Southpaw farrago."

PR firm Baaaaa issued a short statement explaining how it averted the crisis.

"
"
As per standard procedure, we emailed all journalists after the first screening and asked for a brief statement of their opinions. To our shock, none of the responses contained a single reference to another boxing film, or even use of an active verb as a boxing metaphor.

They just said things like "Yes, it's quite good" and "I thought they could've developed the wife character a bit more".

After a day or so we sent a few follow-up emails, asking whether they were quite sure that Southpaw didn't "pack a punch like Rocky" or "leave Cinderella Man out for the count", or "take the crown from When We Were Kings". We suggested that at the very least Jake Gyllenhaal's performance amounted to a "one-two punch of knockout intensity and glass-jaw vulnerability", and that the film "went the distance like a hundred Real Steels".

But all the journalists were adamant that their opinions could be expressed without external comparison. In the end we gave up and advised the distributors we'd just use a big sans-serif font and maybe put a crack in the final "W" so it looked like it'd been punched.

Right before going to press, however, we went for broke and circulated a SurveyMonkey whose only question was: "Complete the following: 'Southpaw is the best boxing movie since _______'."

The correspondent from Sky News was the only one who provided a serviceable answer, which we slapped onto the poster with about three minutes to spare before we had to FTP it to the printers. 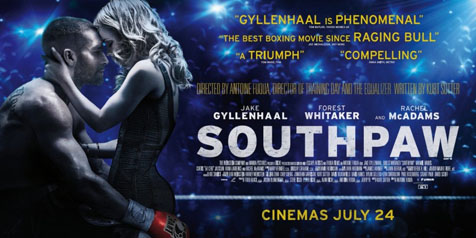 "Thank Christ for that," sighed relieved cinemagoer Lorelei Dolarhyde. "Now I know how Southpaw relates qualitatively to Raging Bull, I can make an educated decision as to whether to go and see it.

"And helpfully, I now know that all other boxing films since 1980 have been inferior, and so there is no need for me to waste time seeing Play It to the Bone.

"In unrelated news, I look forward to the next film about cars roaring into cinemas."

More:  Southpaw  Jake Gyllenhaal  Rachel McAdams
Follow us on Twitter @The_Shiznit for more fun features, film reviews and occasional commentary on what the best type of crisps are.
We are using Patreon to cover our hosting fees. So please consider chucking a few digital pennies our way by clicking on this link. Thanks!