As people who are trying to promote The Hunger Games keep telling me, The Hunger Games is an adaptation of the best-selling fantasy series that's frequently been labelled 'the new Twilight', like that's supposed to be a good thing. However, as people who aren't trying to promote me anything keep telling me, the books are actually rather good. To my eternal, undying shame, I got sent the book for free, but still haven't read it. If you have a problem with that, mail it to 'Jack Reacher, behind you'.

Anyway, the first character posters have been released and spread to the, er, eight corners of the internet. Ooh, black. That's poster code for 'dark'. And 'staring' is poster code for 'the teen angst dollar'. Pretty unremarkable really, but as posters of attractive people being all mopey go, they're leagues ahead of the Twilight poster abominations.

Here's your rundown of The Hunger Games' character roster, complete with my massively informed commentary. 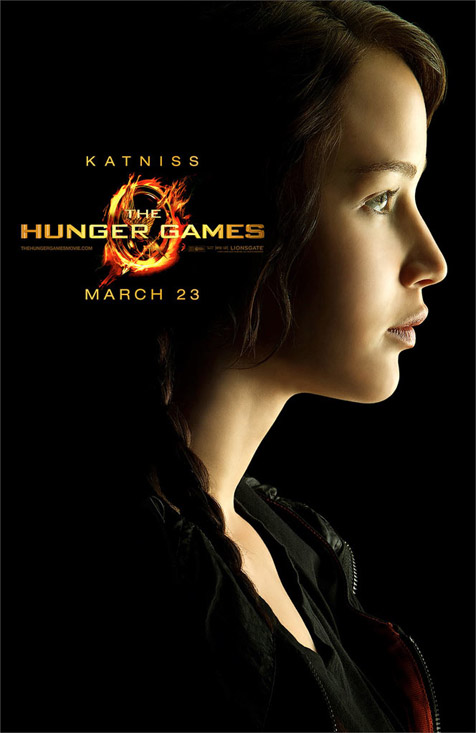 This is Katniss, played be Jennifer Lawrence. I wonder if she likes cats? Probably. Do they have cats in The Hunger Games? Judging from literally the first page of the book, yes, they do. That was a stroke of luck. Notice that she's facing the opposite way to everyone else - this is either because she's fearless and bold, or because she's an idiot. 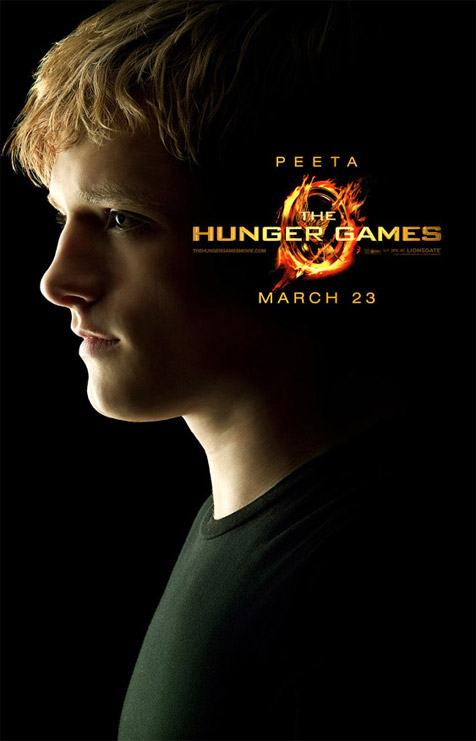 Do not call this man 'Peter'. He will sulk in his room all day long if you call him 'Peter'. This is Josh Hutcherson, pretending he's not at all bothered he didn't get cast as Spider-Man. His character's surname is Mellark, and not Duncan, as I'd hoped. 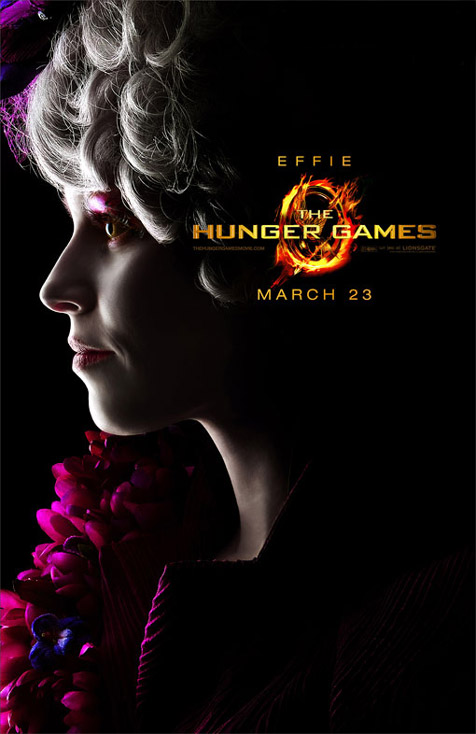 Ignore this woman: she is clearly an attention whore. Effie, as played by Elizabeth Banks, dresses like it's Halloween every day. You might not notice how stupid she looks because it's actually almost Halloween, but trust me. According to a Hunger Games wiki (which I only found because I was trying to get away from there), she's an escort. Not that kind. Aww. 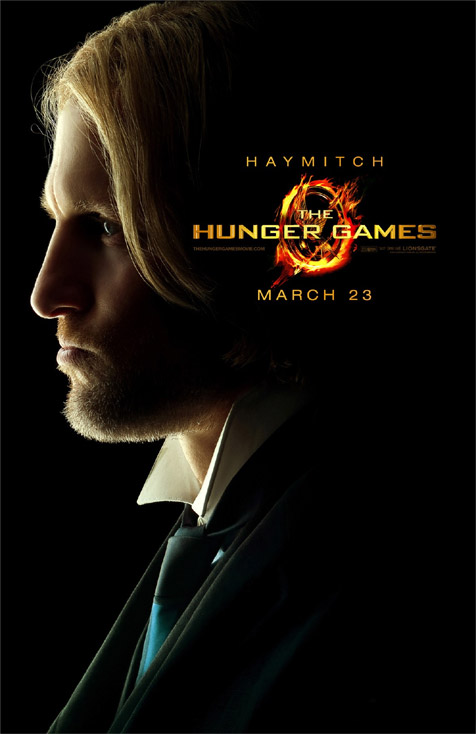 Woody Harrelson's character is called Haymitch. I wonder how many people think he's called Mitch when he walks into a room? How do you greet a guy called Haymitch? You could say "Hey Haymitch!" but people would just think you were saying "Hey hey Mitch!" This guy is basically a Curb Your Enthusiasm episode waiting to happen. 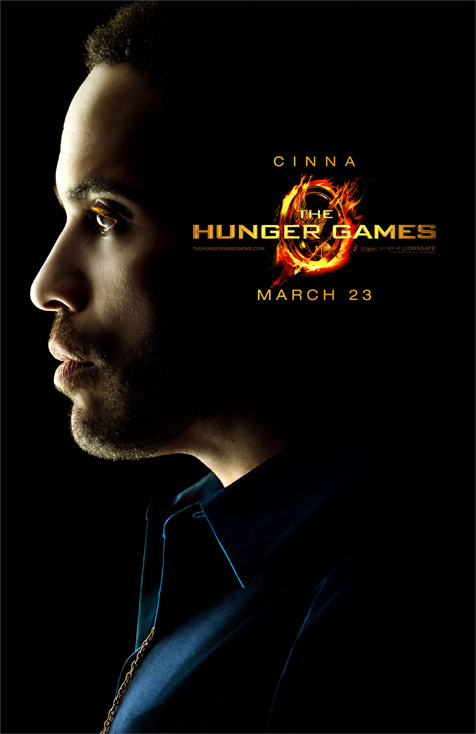 This would appear to be Lenny Kravitz. I checked the movie's IMDb page to see if this was a printing error, but apparently he's supposed to be in it. According to The Hunger Games' wiki, he's a stylist ('Weapons: His costumes, his mind') and a trusted navigator: he can frequently be heard asking if we're going to go his way. (*slide whistle*) 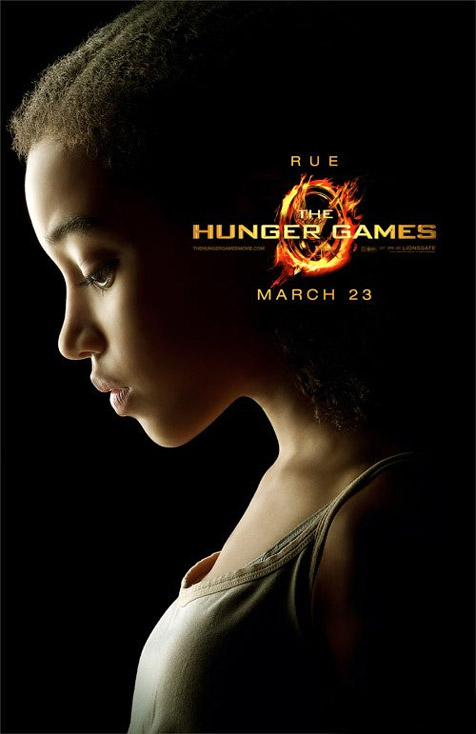 This feisty youngster is Rue, a 12 year-old 'tribute' (all pretend I know what that means) who once warned Katniss about a group of 'tracker jackers' in a tree (seriously, just go with it). Rue is played by Amandla Stenberg, whose first name definitely was not a typo that got out of hand. Rue is actually the character's surname - her first name is Danila. 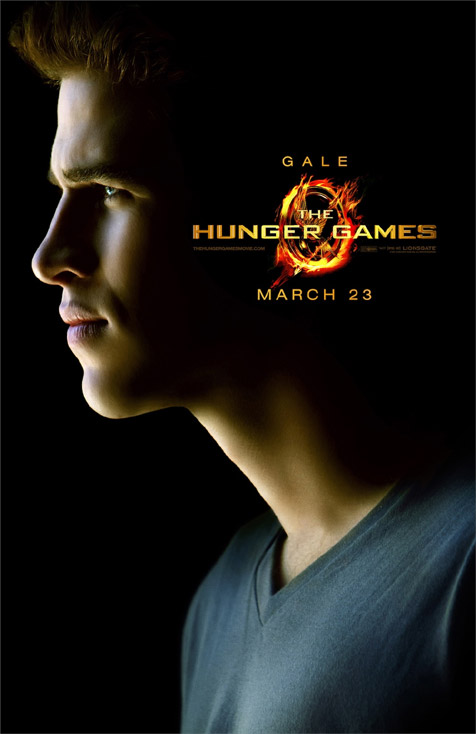 Avert your gaze, puny human, for you look upon a mighty Hemsworth! Yeah, except it's not the one who played Thor, it's the other one, Liam; the one who is currently braving the gums of Miley Cyrus. Gale is part of a love triangle with Katniss and Peeta, but the wiki doesn't say which person in the triangle he's attracted to. Looks like Edward from Twilight. Isn't. 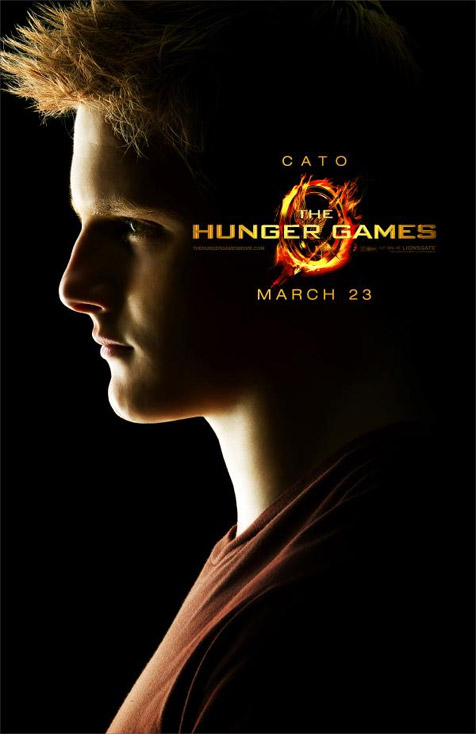 Damn, that's one ugly kid. Cato is played by Alexander Ludwig, an actor about whom I've heard nothing, but I'm happy to inform you he starred in a movie called Scary Godmother: The Revenge Of Jimmy. However, he wasn't in Scary Godmother: Halloween Spooktakular. In conclusion, the Scary Godmother series is now on my Lovefilm rental list.

More:  The Hunger Games  Posters  Josh Hutcherson  Jennifer Lawrence  Elizabeth Banks  Woody Harrelson
Follow us on Twitter @The_Shiznit for more fun features, film reviews and occasional commentary on what the best type of crisps are.
We are using Patreon to cover our hosting fees. So please consider chucking a few digital pennies our way by clicking on this link. Thanks!