Unrelated side-note: Joaquin Phoenix's birth name is Joaquin Bottom. I promise you I am not making this up.

News travels fast in this town (by which I mean the internet). It was only Friday that HitFix reported Marvel weren't hiring Ed Norton to reprise his role as Bruce Banner aka The Incredible Hulk in The Avengers. Since then, Ed Norton's agent has fired off a bitchy email to Marvel, in which he accuses them of reneging on their deal, and Norton himself has played devil's advocate and suggested, hey, maybe we shouldn't all be losing our shit over who plays a fictional rage monster.

Today, CHUD are reporting that Marvel have already offered the role of Hulk to none other than insane rap genius Joaquin Phoenix: just the kind of stable yin needed to counter the Hulk's raging yang.

Until we hear otherwise, or until Phoenix spectularly announces the end of his bogus rap-cting career, we can consider this a smelly bullshit rumour for now - albeit an interesting one. Joaquin the superhero? Wasn't Johnny Cash superhero enough?

If Marvel wanted an actor who'd cause less trouble than Ed Norton, they couldn't have picked a worse guy than Phoenix. Except maybe Mel Gibson. Now there's an interesting Bruce Banner. "If I get raped by an angry green giant, it's my own fault!" 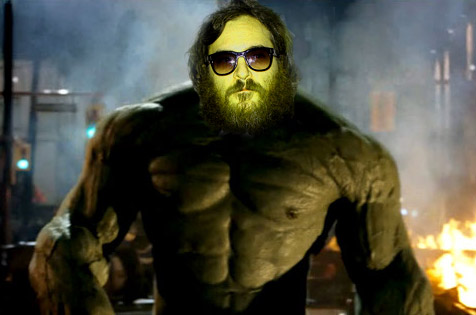 JOAQ RAGE AGAINST INDUSTRY! JOAQ SULK POINTLESSLY
More:  Joaquin Phoenix  Hulk  Edward Norton  The Avengers
Follow us on Twitter @The_Shiznit for more fun features, film reviews and occasional commentary on what the best type of crisps are.
We are using Patreon to cover our hosting fees. So please consider chucking a few digital pennies our way by clicking on this link. Thanks!