This story is not true

A story being circulated today claims that Fox are having to replace "over 50%" of their bus shelter posters for The Wolverine, due to theft. That'd be interesting, except it's 100% not true.


I'm all for a good PR spin, but the willingness with which movie sites have covered this total non-story is a little dispiriting. The story emanates from Collider.com, where writer Steve Weintraub claims Fox executives told him the Sumi Ink concept poster for forthcoming release The Wolverine has been so popular, it's been stolen from bus shelters up and down the country. So far I've seen it reprinted as fact on Sky Movies, the Radio Times and countless other media outlets.

"
"
"I found out Tony Sella, Fox's Chief Creative Officer, came up with the Sumi Ink concept and it's being stolen on a daily basis all over the country. The exec's [sic] told me they'll need to replace over 50% of the bus shelters." 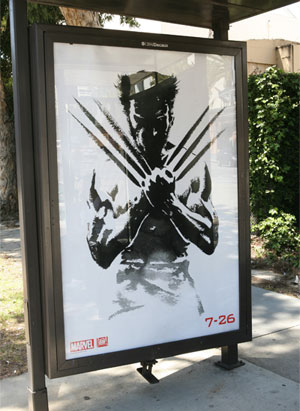 One of the lucky few that remains.


Even though I am in possession of absolutely none of the facts, and can not be bothered to research the typical spread of bus shelter advertising a movie of The Wolverine's size would merit across America, I can boldly state that this claim is total and absolute horseshit.

Look, it's a nice image and I'm not doubting a couple of light-fingered bastards cracked open a few bus shelters to pinch the posters… but over 50% of them? That'd be hundreds if not thousands, right? We'd be talking about an army of thieves, vandalising bus stops nationwide, purely to steal this one, incredible, must-have poster of The Wolverine and hang it on their walls, like it was whispering instructions to them through the perspex. Fox would be freaking out they'd somehow commissioned a poster with subliminal imagery, begging bus users to take it home. What else might the poster make them do? Self-harm? Kill?

You know what's much more likely? Someone in Fox's PR department heard about a Wolverine poster being nicked from a bus stop and cooked up this cock and bollocks story about an epidemic of poster theft in order to fool gullible sites to run a story that effectively doubled as free advertising.

And just so I'm not contributing to their shameless marketing exercise, I'm not going to tell you when The Wolverine is released in cinemas.

More:  The Wolverine  Hugh Jackman  James Mangold  Posters
Follow us on Twitter @The_Shiznit for more fun features, film reviews and occasional commentary on what the best type of crisps are.
We are using Patreon to cover our hosting fees. So please consider chucking a few digital pennies our way by clicking on this link. Thanks!