We all knew that action star Jason Statham was a former diver who represented Great Britain in the Commonwealth Games, but the BBC have unearthed the first footage of the actor performing a series of high dives – and he's not very good. I mean, he's obviously quite good, given that he's representing his country and everything, but the video shows Statham come close to bellyflopping, then appears dejected as the judges mark him poorly. Frankly, this is the most I've liked Jason Statham in years.


Actors don't have very many opportunities to fail in public these days. Their profession puts them in the upper percentile of people considered cool and they're surrounded by people paid to make them look good. A film's success only serves to make the actor look good by proxy, but a film's failure is very rarely attributed to the actor alone. Said stars have their image closely controlled; they're coached so they appear a picture of cool at all times – unflappable in interviews, hilarious on talk shows, good sports all round. The closest you get to seeing a star unguarded is when they're papped, but even when seen at their most raw, they'll always look good stood next to paparazzi.

Jason Statham has done pretty well cultivating an image for himself: a no-nonsense Londoner who's just as likely to buy you a beer as he is to kick you in the face. He's cool. He's successful. He's an Expendable. In Statham's movies, he always wins – whether it's by pulling off the impossible heist, punting a bad guy off a bridge or just by walking off with the girl at the end. Statham's off-screen relationships with models like Kelly Brook and Rosie Huntington-Whitely suggest the man is not far removed from the myth. Everything always seems to be coming up Statham.

Except it wasn't always this way. 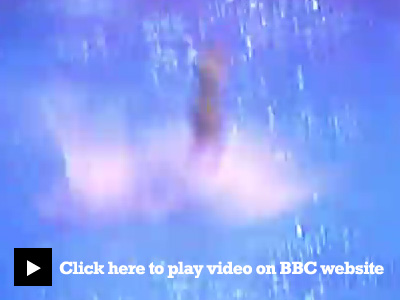 The video currently spreading round the web of Statham scoring a 13.86 ("that says it all, doesn't it?") at the 1990 Commonwealth Games shows the star before he became 'Jason Statham'. He has hair! From the first moment of the video, his fear is palpable. He looks nervous. His first few dives are not particularly good. He's in 8th position. "He's really gone to pieces in this final, Jason," says the commentator. For his final dive, he over-rotates, hits the water at an angle and according to the commentator, "was lucky to get away without injury". The crowd let out an "Oooh" upon impact. When the judges read out his low scores, Statham doubles over in shame. And 'Jason Statham' is nowhere to be seen.

There is something vastly satisfying about seeing a star 'fail' in this manner – and I don't mean that in a schadenfreude kind of way. It makes him appear fallible. It makes him appear human. It makes him way more likeable. Dramatic actors spread themselves thin over a variety of roles, showcasing their range of emotions; not so with action stars – you're lucky if you get a raised eyebrow. So to see Statham failing at anything is relatively unique. You'd get the same result were you to see Arnold Schwarzenegger fumbling a football, or, say, Sylvester Stallone crying because he can't get an erection.

As long as Jason Statham continues to be well-liked and famous, we will probably never see him publicly experience disappointment or shame ever again. That side of him is not profitable. But it is relatable.

More:  Jason Statham  The Expendables 3
Follow us on Twitter @The_Shiznit for more fun features, film reviews and occasional commentary on what the best type of crisps are.
We are using Patreon to cover our hosting fees. So please consider chucking a few digital pennies our way by clicking on this link. Thanks!