Vanilla Ice. If there is ever a more ridiculous joke of a man, I don't want to know about him. The white rapper, whose real name is Robert Van Winkle (no, seriously), and who recently struck out on Dancing On Ice, is now adding 'DIY show' to his impressive list of Ways to Lose Credibility with Everyone Everywhere.

But it's not some kind of stunt career move. Oh no. Vanilla Ice himself says:

The show is called The Vanilla Ice Project but there's no word yet on when it airs in America, let alone if we'll get to see Mr Winkle at work here in Britland. Here's hoping though - I'll have more bloodlust watching this than when Takeshi's Castle is on. 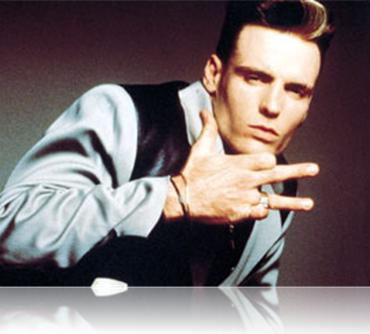 Vanilla after his first brush with a power tool.

HASTY UPDATE: While this show was announced in August of last year (and covered by us here), this is the first time the douchebag rapper has had anything to say on the matter. So it’s still worth reporting. Just.

More:  Vanilla Ice  DIY  Ridiculous Career Move
Follow us on Twitter @The_Shiznit for more fun features, film reviews and occasional commentary on what the best type of crisps are.
We are using Patreon to cover our hosting fees. So please consider chucking a few digital pennies our way by clicking on this link. Thanks!