Well, at least one good thing came from the Oscar nominations...

A single nomination for Drive, three nominations for Transformers: Dark of The Moon, bugger all for Shame; whatever your interpretation of the Academy's choices, I hope you're all as excited about the following realisation as we are... 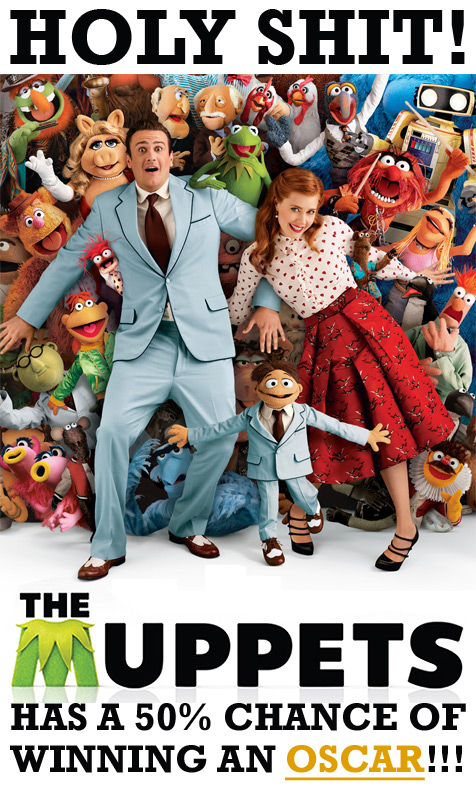 Yes! Thanks to a bizarre decision to only include two nominations instead of the usual five in the 'Best Song' category, Bret McKenzie-penned "Man or Muppet" now stands a much better chance of landing a coveted (and in this case deserved) Academy Award. I feel sorry for whatever song was nominated from Rio now, because nobody wants to see that win. That was meant in the nicest possible way.

Here's the track in question from The Muppets, if you happen to like nice things that are funny and nice:

As a bonus exclusive, we can now go live via satellite to Hollywood, where Kermit the Frog is waiting to answer our questions. Kermit, what's your reaction to this evening's news?

I've just been informed Mr. Frog will no longer be taking questions.

More:  Oscars  The Muppets
Follow us on Twitter @The_Shiznit for more fun features, film reviews and occasional commentary on what the best type of crisps are.
We are using Patreon to cover our hosting fees. So please consider chucking a few digital pennies our way by clicking on this link. Thanks!