13 Hours: The Secret Soldiers of Benghazi

A sunset bears down on an open field. Cloth rags blow in the wind. Two children run in slow motion through the long grass. A snag of material on a twig blows in the wind again. Oh, we're back to the sunset again, ok. Now some sheep are milling around for some reason. And now those children are running again. Aaand we're back to the sunset. Jesus Christ, Michael Bay, I get that you're using these establishing shots to build tension but it’s no wonder this film is 144 minutes long. This film should be 6-7 Hours: The Secret Soldiers Of Benghazi. 8 Hours: The Secret Soldiers Of Benghazi max.


So in news that will surprise no one, the new Michael Bay film is a lengthy, self-indulgent ode to patriotism. It's one part dramatised slow motion and one part overlong overture of explosions and gunfire, all of which affords you plenty of time to check your watch during the 144-minute runtime. But at least the circumstances of the real-life story and the fact that John Krasinski's beard provides genuine heart throughout it all means that the film occasionally drops emotional bombs as well as holy-fucking-shit-that-thing-is-heading-straight-for-me ones. 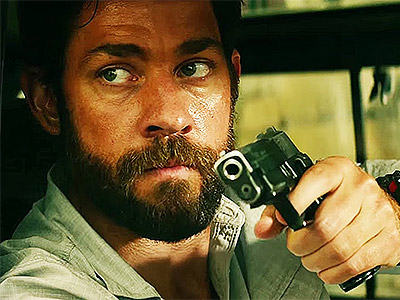 John Krasinski was only given a gun to shave with.


Sadly, the film sets off in what looks to be a far more intelligent direction before veering back on to Michael Bay's usual path of destruction. As John Krasinski's beard arrives in Benghazi for his contracted CIA posting, he and fellow 'brutha', James Badge Dale's beard, get involved in a brief, tense stand-off with Libyan militants that instantly evokes the one accidentally interesting episode that occurs during every season of Homeland.

John Krasinski's beard even argues early on to his douchebag idiot boss (in this film, 'douchebag idiot' equates to less impressive beard coverage) that his special skill-set is in reading people. The implication that there might be an emphasis on the 'I' in this CIA suggests a film in which covert, clandestine operations are successful through negotiation, diplomacy and smart thinking. And it makes for an engrossing first half, filled with army technique and camaraderie when not padded out further with location shots.

But then, after an hour, Bay gets bored with his own restraint and just hands everyone a gun. What ensues is fiery chaos and shaky-cam panic in the midst of a lot of smoke, dust and sparks. There's still lots of style of course, with a tracking shot of a mortar bomb from launch to landing and a terrifying view of thick black smoke coming in under a closed door providing some evidence that Bay isn't always on autopilot when it comes to battling the big screen. But mostly it's just crashing and banging and shouting for the majority of the film's 144 minutes. 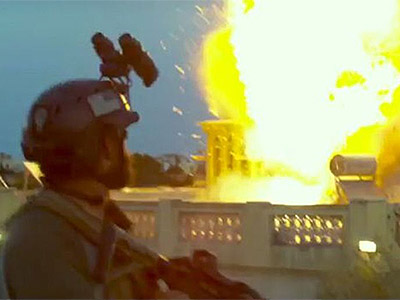 
The pro-argument is of course that this is just what war is like. Bay is simply giving us a realistic depiction of frontline action and all the confusion, devastation and bloodiness that comes hand-in-severed-hand with that. But I would counter that films are still films, with a narrative and an arc and camera angles all put to the use of entertainment first and foremost. And I would argue that there is a way to make the audience relate to the 13-hour ordeal of these soldiers without putting them through a visual ordeal that feels like it lasts for the same length of time.

Still, if you like this kind of thing and have a strong stomach and a stronger bladder, come for the few emotional punches, the impressive facial hair and the sight of Jim from The Office going to war. Or come because this is likely to be Michael Bay's final proper film before he just starts going into cinemas and attacking the screens with a grenade launcher and some matches. For 144 minutes. Did I mention that this film is 144 minutes?

More:  13 Hours The Secret Soldiers Of Benghazi  Michael Bay  John Krasinski  James Badge Dale
Follow us on Twitter @The_Shiznit for more fun features, film reviews and occasional commentary on what the best type of crisps are.
We are using Patreon to cover our hosting fees. So please consider chucking a few digital pennies our way by clicking on this link. Thanks!