21 Jump Street: a US cop show from the late 80s that a lot of us probably never heard of. It was about youthful-looking cops going undercover in high schools, lasted five seasons, kick-started the career of Johnny Depp, boasted guest stars like Brad Pitt and Josh Brolin, and had a kick-ass intro that's all very Saved By The Bell. So then, perfect fodder for a 21st Century piss-take.


As the Police Chief says in this big screen update, with a nod, a wink and his tongue firmly planted to his cheek, they're "reviving a cancelled undercover police programme from the 80s." This time, however, with a slimmed-down Jonah Hill and a goofy Channing Tatum bringing the funnies, swears and gunfire.

After newly-graduated police officers Jenko (Channing Tatum) and Schmidt (Jonah Hill) cock-up their first arrest, they're re-assigned to Jump Street and sent back to high school as undercover students. Their mission: to bring down the source of a new hallucinogenic drug ring. Or as their new foul-mouthed boss Captain Dickson (Ice Cube) says: "Infiltrate the dealers, locate the supplier." 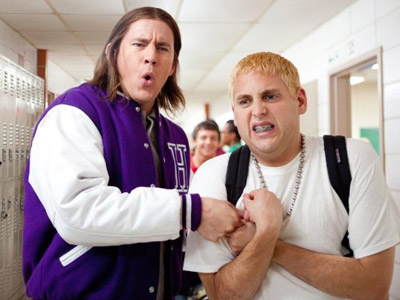 Not mentioned: give Eminem a titty-twister.

21 Jump Street works best as a knowing parody of cop movies: everyone is in on the joke, while Jenko and Schmidt realise what they're doing is totally worthy of Hollywood. They get stabbed in the shoulder, compare their jobs to Die Hard, jump over car bonnets because 'it looks cool' and talk about buying some white doves because they "make you look like badasses". Amongst all the laughs and winks to camera are some top-notch fist fights, slow-mo shoot-outs, high-speed car chases, the odd explosion and the obligatory 'tooling-up' scene. Hell, I'm going to go ahead and proclaim this 'the American Hot Fuzz'. 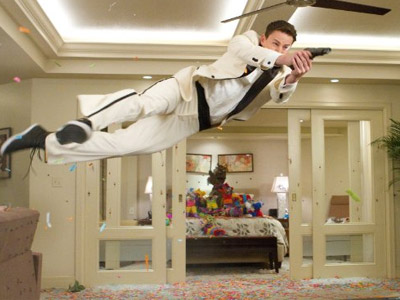 
Gun fights, parties, booze and drugs aside, the film's backbone is actually how terrified our heroes are by the dreaded thought of returning to high school and being teenagers again - that's something that's more relatable than getting stabbed. While it adds a little emotional meat to the bones, it's refreshing to see two actors who made their name in high school movies now looking at it from the other side of the fence - confused by 'hipsters', blaming Glee and struggling to understand what’s cool.

Though they seem an unlikely duo, Channing Tatum and Jonah Hill have superb brotherly chemistry, bouncing off one another with complete confidence. While Hill is a dab hand at this comedy gig, it's a delight to see the usually tight-laced Tatum letting loose and making the LOLs in superb fashion. A couple of areas do fall a tad short in places; the pair accidentally taking the wrong classes is a lazy excuse for fish-out-of-water gags, but the odd short-coming is usually redeemed by a scene-stealing Ice Cube. There's even an understated cameo that'll please fans of the TV show.

With a sequel hinted at nicely, and already confirmed by Hill, we look forward to following these boys all the way through college.

More:  Jonah Hill  Channing Tatum  Phil Lord  Chris Miller  21 Jump Street  Ice Cube
Follow us on Twitter @The_Shiznit for more fun features, film reviews and occasional commentary on what the best type of crisps are.
We are using Patreon to cover our hosting fees. So please consider chucking a few digital pennies our way by clicking on this link. Thanks!