A Hologram for the King

If you're putting together a wall-mounted Hanks matrix, which I'm sure practically all of you are, pin A Hologram for the King somewhere in the gaping chasm between The Terminal and Cast Away. A man is adrift in a foreign land, and you wouldn't give a shit if he wasn't Tom Hanks. Hologram tries your patience a bit, but its leading man carries it, like he always bloody does.


On his recent Desert Island Discs appearance, which is lovely, Kirsty Young suggested to Hanks that all his characters are on some level struggling with loneliness. Though he gamely agreed and spoke about his isolation in childhood, this didn't strike me as a defining statement. It's true of some roles, like Sleepless in Seattle, Punchline and Splash, but it's more pertinent to say that when his characters confront isolation they are pressed into it by external forces, like a plane crash in the South Pacific, a revoked passport, or being sold in a yard sale.

The external force for Alan Clay is that Western capitalism has failed him. As the opening take on Talking Heads' Once in a Lifetime signifies, he had all the trophies of middle-class American life, house, job, family, car, but it's all gone south and so here he is in Saudi Arabia, trying on a new culture for size as he attempts to sell an IT system to the king. 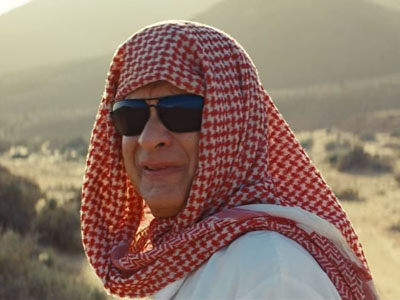 Hanks, seen here heavily in disguise after he heard I'd breached the terms of his restraining order against me, which was based on a misunderstanding. I was only under his car looking for my contact lens.


I'm a big believer in characters' jobs as signifiers to their personality and wider place in the social order, and IT salesman is one of those ones that means 'unremarkable man unsatisfied with his lot'. Hanks is of course the master of unremarkable, and pitches up in Jeddah in one of those suits that attempts to look more expensive than it is. (Clock the shoes, though: black to match the suit, but comfy and practical rather than stylish, hoping no one notices. That's where the character is.) Once there his principal task is to get the WiFi working for his IT team's demo, and so begins a series of culture clashes.

These are played for better laughs than you're expecting. Films where an American goes to the Middle East or South Asia usually attempt to wring too much out of Carry On Up The Khyber-style 'hilarious' cultural misunderstanding, but Hologram stays largely on the right side of this. It takes one horrific misstep which nearly blows the whole gaff, though. Clay's new best friend is his driver, Yousef, an Arab played by Alexander Black, who is as far as I can tell straight-up, 100% A White Guy.

Kudos to Black, who states he travelled to Saudi Arabia to study the dialect, but ... this is pretty much just blacking up, right? (He said on the Tribeca red carpet that his make-up artist's father worked on Lawrence of Arabia, which I suppose is intended to mean that at least it was done competently.) His is a good comic performance, full of jittery malapropisms for Hanks to play off and working in the usual eager fascination with Western culture, but they couldn't have got someone of actual Middle Eastern descent to do it? I waited for some caveat in the dialogue about Yousef having been born to white parents and moved to Saudi when he was young, but none came. If Exodus: Gods and Kings is guilty of whitewashing, why has no opprobrium been thrown this way? Because no one in Hollywood's overinterested in fighting Middle Eastern actors' corner, is the most likely answer. 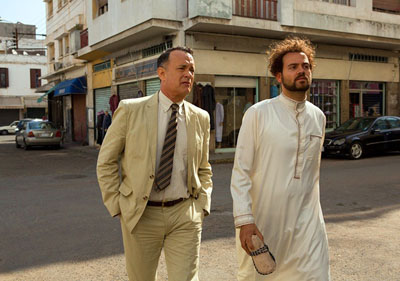 
Once he meets 'Saudi' (Anglo-Indian, but hey, close enough) Sarita Choudhury, the doctor who diagnoses and treats a cyst on his back after he's drunkenly attempted exploratory surgery himself with a steak knife, we get back on track. Clay and Hanks both have something to cling on to now, and we can hit the home straight with a love story.

It makes for a satisfying enough third act, but this oasis is now supposed to be the thing he finds in the desert, when it jars that love isn't what he was looking for. He was looking for himself in the wilderness. Hollywood will happily substitute the discovery of love as resolution for any problem a principal character has, because it's easy and ties everything up, but here you scratch your head a little. Was that all you wanted to fill your profound spiritual void, Tom? Sure, the constraints of Saudi society mean he must act with classic Hanks propriety in courting her, which suits him down to the ground, even if they are breaking Sharia law, but you're not sure how it's solved all his problems. Certainly he hasn't come to accept Saudi society as preferable to the Western rainbow-chasing he's left behind, which was the setup at the start.

So Tom Hanks goes out into the desert in search of his calling, like Jesus, and ends up with a girlfriend, less like Jesus, who was never all that bothered about dating. I don't know, sometimes I wonder whether Tom Hanks is even Jesus at all.

More:  A Hologram For The King  Tom Tykwer  Tom Hanks  Sarita Choudhury  Alexander Black  Sidse Babett Knudsen
Follow us on Twitter @The_Shiznit for more fun features, film reviews and occasional commentary on what the best type of crisps are.
We are using Patreon to cover our hosting fees. So please consider chucking a few digital pennies our way by clicking on this link. Thanks!