A Million Ways To Die In The West

It's a tired opinion, but Seth MacFarlane really does only appeal to fans of Seth MacFarlane… of which, I imagine the number one fan is Seth MacFarlane. Such is the extent of the lazy self-indulgence at work here, resulting in a film that misfires as many times as its title suggests. A Million Ways To Die In The West? I don’t have enough space here to list every single one, but here are the highlights.

Once you have sat through the 10-minute-long opening credits sequence designed to make you want to jump into the nearest desert canyon, one of the first jokes you’ll hear is Seth's cowardly character Albert suggesting that being called "yeller" is offensive to two Asians present in the scene. It’s a cringy slur that sets the tone for the rest of the movie: "hur hur bad taste funny".

By the time you get to Seth MacFarlane exclaiming that the Charlize Theron’s bustle-enhanced derriere would be a cruel trick to play on a black man, you have to start wondering if the period in this period comedy is actually the 1970s. 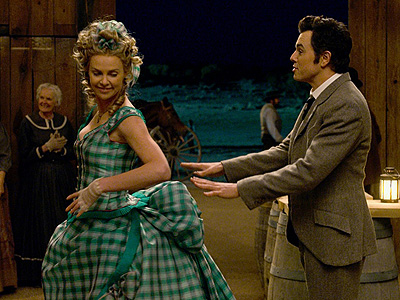 (*talks jive for no reason at all*)

As with the above gag, there is actually is a clever angle to be played here: the folk of the Wild West are largely ignorant of the wider world, they have outmoded attitudes and primitive education. It’s a font of humour that MacFarlane explores to great effect throughout the film (e.g. the town doctor deciding that Albert's cold can be cured by "ear nail… a nail in the ear"), but all too often MacFarlane mislays the punchline. If racism is rampant in the Wild West, the racists should be the butt of the joke, not the racist remark itself. And yet MacFarlane seems quite content to make offensive jokes under the general banner of "Hey, it’s the olden days – this kind of thing happened all the time".

This general negligence is apparent at pretty much every turn. For every insightful gag about life in the Old West, there are 10 other supposedly funny moments where someone farts, or shits themselves, or falls over, or graphically discusses sex, or gets pissed on, because who needs witty dialogue? Even a couple of pleasant surprise cameos aren’t given the courtesy of a funny line. Reminder: recognising someone famous in a scene is not, in of itself, a joke.

It baffles me that, when fart gags are such a widely derided source of humour, MacFarlane still feels that it is ok to fill his movie with them. The fact that this film frequently farts, sharts and diuretically explodes into a hat in order to wring laughs from its audience feels like exactly the kind of thing that Family Guy would have ridiculed in its heyday. No one expects high-brow satire from MacFarlane, but what we get is far more disappointingly childish than what he is capable of. Even if liking this film is dependent on your tolerance for MacFarlane, it’s hard not to see that he isn’t pulling his weight here. 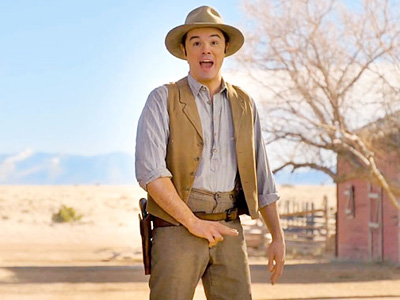 WAHEY! Is anyone laughing yet?

MacFarlane has never been shy in spoiling his audience with all of the things that he finds interesting, whether it’s countless pop culture parodies, nonsensical cutaway gags or bellowing show tunes, but at several points here it’s all-too clear that he is making this film for himself rather than his audience. Because even though, for the most part, the film attempts a gag-per-minute ratio, there are lengthy sequences without a single joke, set-up or titter-worthy moment… all because MacFarlane gets swept up in making an actual Western.

10-minute sections go by without nary a chuckle as MacFarlane provides a tender scene where a central romance blossoms, or delivers a tense horseback chase that you think will end with some kind of slapstick crescendo but actually just peters out once the action has subsided. This is in a film where, until these points, the biggest audience reactions came at an admittedly genius pop culture cameo and a scene in which Sarah Silverman has semen on her face.

It's problematic to say that MacFarlane shouldn't be reaching to extend the film beyond its fart and spunk tone-setters, but this film loses sight of what it's trying to be after already delivering quick-fire gags for half of its running time. All because MacFarlane forgets how to parody.

Knowing MacFarlane's love for the gimmick he uses all too often well in Family Guy, you’d expect the same trick to be used once or twice here… except he seems unwilling to fully commit. So we have a scene where he is sitting in the saloon talking to friends Giovanni Ribisi and Sarah Silverman and refers to a dead body right outside the door. So they all get up, go outside to allow MacFarlane his gag, and then immediately walk back inside and sit back down again. It’s the cutaway gag for the man who didn’t want to actually cutaway.

It’s not all bad. There are a lot of great jokes here and I did laugh five, maybe even six, times but MacFarlane has an annoying habit of unnecessarily repeating his jokes for a second bite of the same comedy apple. Sarah Silverman’s prostitute Ruth comes down the stairs after an 'engagement' stretching her jaw… and then references the blowjob she just gave. A great line making fun of Amanda Seyfried is then put into practice in a later scene. A brilliantly funny joke about townsfolk looking deadly serious in photos is eventually referenced so often that it becomes a running gag that completely exhausts the punchline long before MacFarlane has given up on it. 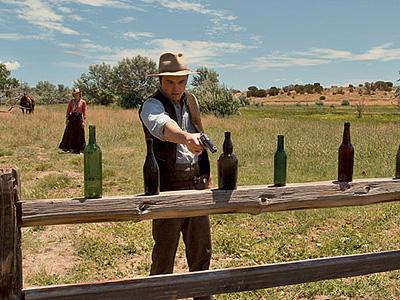 It’s easy to pick on the acting talent of a man who has until now rarely been (himself) in front of the camera, but he delivers a mixed performance at best. No one can doubt his comedy timing, even if scenes where he is obviously riffing on the spot start to grate, and he even gives surprisingly decent dramatic takes occasionally, but far-too frequently he bears the self-aware smirk of a man who knows he is on camera and can’t act naturally. It’s all too much to take, particularly from someone who already has the most punchably smug face in cinema.


But then maybe that’s just me. The guy in front of me at the screening was cackling loudly from start to finish, even through the quiet, emotional scenes. If, like him, you are either pilled up to the eyeballs or have no control over your motor functions, you might love this film. If that's the case, come back to me and I’ll explain the other 999,993 reasons why you shouldn't.

More:  A Million Ways To Die In The West  Seth MacFarlane  Liam Neeson  Charlize Theron
Follow us on Twitter @The_Shiznit for more fun features, film reviews and occasional commentary on what the best type of crisps are.
We are using Patreon to cover our hosting fees. So please consider chucking a few digital pennies our way by clicking on this link. Thanks!