A Most Violent Year

How to make it in America: fairly well-worn ground for films, and yet still they keep coming. This immigrant's tale from JC Chandor is more than that, though. A largely non-violent study of how the (mostly) law-abiding react when faced with violence, and of whether turning the other cheek is a workable - or even desirable - strategy.


The poster sold you a gangster movie but they Shanghaied you, I'm afraid. While the standard organised crime drama shows you a man who'll stop at nothing to grab his piece of American Pie, A Most Violent Year is about a man trying very hard to get hold of it without crossing the line. Where that line is keeps shifting, though. Oscar Isaac's Abel Morales (Spanglish translation: "Honest Abe"), a first-generation immigrant, has done pretty well up to 1981. Owning a thriving heating oil business with American wife Anna (Jessica Chastain) and looking to expand, he takes a punt on a deal for a riverside building, offering direct access to delivery by boat. Coming up with the cash in time should be a formality, but this is the most crime-ridden year in New York's history, and someone's robbing his trucks and isn't shy to dish out the odd right-hander to the drivers. 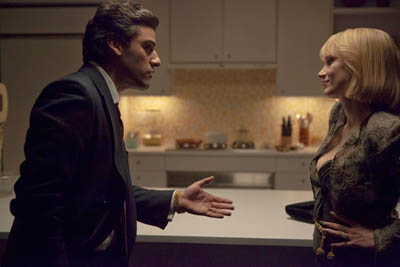 "Look, all I'm saying is, history's going to prove me right on the REO Speedwagon issue. They're this generation's Beatles."


What recourse does Abel have? Arm the drivers? His American lawyer (Albert Brooks) and wife are both of the view that the only thing that stops a bad guy with a gun is a good guy with a gun. This argument is superficially true, I always think, but ignores any question of whether picking up the gun also effects the good guy's own moral decline. Whether that question is on Abel's mind is unclear; he's against the idea mainly out of self-interest. If a driver kills somebody, he'll be liable.

It's these sorts of questions that give A Most Violent Year its richness: is a non-violent response a moral stance or just a pragmatic one? Can you fight crime without becoming a criminal yourself? Is that Jessica Chastain's right nipple on the poster? "I spent my whole life trying not to be a gangster," a desperate Abel complains late on. "And now they're going to own us."

He enjoys the trappings of the lifestyle though, or maybe the slicked bouffant and the camel-hair coats are just the cinematic signifiers of gangsterdom and I'm programmed to accept them as such. He married a gangster's daughter, too, in the knowledge it would give him a leg-up. Abel isn't squeaky clean (they appear to have done some "creative" accounting in the past) and Anna's not above a little strong-arming. A scene in which she admonishes David Oweloyo's district attorney for raiding their home during their daughter's birthday is telling. "This was very disrespectful," she informs him, leaving no doubt whom she thinks is in charge. 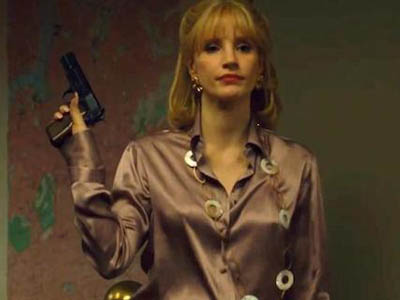 If only Reagan had lived to see this.


This was a cast always likely to deliver. Isaac and Chastain make for a couple whose history seems clear to you through their manner and clothing without explanation: his outfits are conspicuously expensive, the prizes of the newly wealthy. She is power-dressed; the wild child of the seventies now grown up and embracing the capitalist ideals of the new decade.

Isaac plays him like a gangster, the sort who knows it does no harm to have people think you're badder than you are, but inwardly with no stomach for bloodshed, appalled at the injustice of working for something then having it snatched away. Chastain is Lady Macbeth in shoulderpads. A scene where they hit a deer with their car and have to put it out of its misery demonstrates their contrasting attitudes to violence. One has grown up with it and understands you can't make it in America with a clean nose. The other is going to have to get used to it.