Arnold Schwarzenegger is in a film in which he plays a character who unaccountably talks like Arnold Schwarzenegger, so all's well with the world. But you begin to realise after a while that there's a reason why this isn't usually so much of a problem: it's that most of his films are a bit daft, and realism isn't why you turned over to ITV4, so you just shrug and go with it. But Aftermath isn't daft: it's dead serious. Oh heck.


There was always a point to Schwarzenegger, and I feel like we all accepted it and acted accordingly, without the need to say it aloud. We got along fine that way for a good 25 years. But it looks like we need reminding, so I'll say it: he is very silly. He's a massive Austrian man with arms that look like someone's glued barbecued chicken to them, who briefly became the most successful film star on the planet despite not being terribly good at acting, and was then twice elected Governor of California. That he got so far said something about all of us: in an uncertain world, we embraced silliness. We valued it.

Now look at us. The world's a bingo hall and there are serious, worthy films about grief and loss doing the rounds with Arnold Schwarzenegger in them. And we're supposed to just sit there and take it. 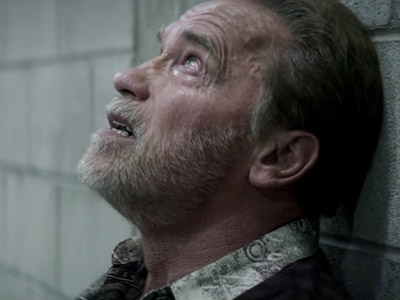 All right mate, we've all had a drink.


You notice very quickly that Aftermath is perfectly OK. It has a lot going for it, even: the sort of mid-budget character piece in which men go through some stuff and cry silently while sliding their backs down a wall into a sitting position on the floor. It's just that one of these men is Arnold Schwarzenegger. He isn't particularly terrible at it; he's just Arnold Schwarzenegger, and this isn't what he's for.

There is a slight leap required to accept him as an amiable construction worker about to become a grandfather, because he looks like he does, and a far larger one to swallow that he is Russian. In terms of alternative courses of action production-wise, there were others available: make him Austrian, for example, or get him to at least try a Russian accent, or, y'know, get someone else to do it. On their way back to America from a trip home to Austro-Russia, his wife and daughter die in a plane crash. "It's the worst news anyone can ever receive," the lady at the airport tells him, and leaves it at that. Cheers.

This was all Scoot McNairy's stupid fault, because he was the air-traffic controller who dropped the ball and let two planes collide, and so he's miffed about it, Arnold's super-miffed about it, and it trundles along like that for an hour or so. This hour shows a few cracks where it's been underwritten or perhaps overedited: Scoot loses the plot to his PTSD over the course of roughly one scene in which he flips out while cooking eggs, but we need a bit more to emphasise the strain on him and his family. Arnold just sort of mopes around, gets shirty with some stereotypically douchey lawyers with slicked-back hair from the airline who smirkingly want to pay him off, then mopes around a bit more. 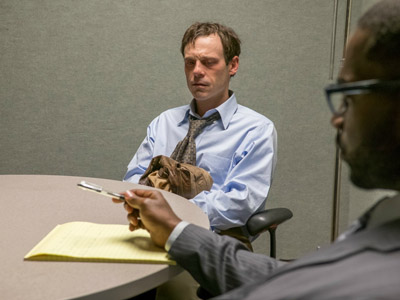 "It says here 'Scoot', but I'm going to go ahead and assume that's a typo for 'Scott'? Because Scoot isn't a thing humans are called, as you know."


Eventually, he decides to do something. Aha, you think: he's going to remove his shirt and touch down an Apache helicopter in Scoot's back garden, shoot down the door with a Gatling gun in each hand and say: "Knock knock!" He does none of this. After an hour's brooding, we get three muted endings in slightly-too-quick succession and then we're off home.

There will be a reason why Schwarzenegger was thought right for the role, probably that they needed a star attached to get it funded, and he's not being hired for anything big other than returns to earlier franchises. There's even a certain vision to be admired in letting him have a stab at it. But stars are there to do a certain thing, by and large. Arnold Schwarzenegger is there to lift heavy things and drive jeeps off buildings onto Harrier Jump Jets. If we could all just get back to a place where we accepted that, maybe we'd all learn how to get along again.

More:  Aftermath  Elliott Lester  Arnold Schwarzenegger  Scoot McNairy  Maggie Grace  Hannah Ware  Mariana Klaveno  Glenn Morshower
Follow us on Twitter @The_Shiznit for more fun features, film reviews and occasional commentary on what the best type of crisps are.
We are using Patreon to cover our hosting fees. So please consider chucking a few digital pennies our way by clicking on this link. Thanks!